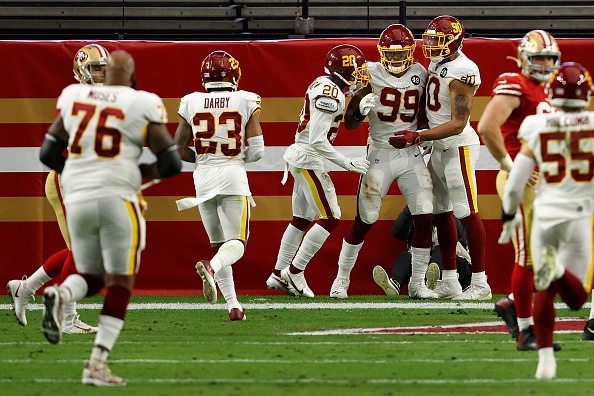 Here is hoping that your first week of playoffs finds you still seeking the league championship. If, however, the fantasy fates did not smile on you, but your squad is still plugging along for a place in the money even without the opportunity to hoist the winner’s trophy, then you need to avoid letting up on your search for IDP help on the wire. Let us examine which defensive players are available to improve your chances of winning as the playoffs proceed onward and upward.

Young had a tremendous week against the visiting Patriots: eight total tackles (TT), six of those solos and one for a loss of yards (TFL), a sack, a QB hit/hurry (QH), an INT, a pass deflection (PD) and a TD to put the cherry atop the sundae. Do not expect this sort of bounty to happen every week, naturally, as the next two teams on the schedule do not rank as high in terms of allowing fantasy points to opposing LBs, although the Seahawks in Week 16 are in the top tier while the Jets are not entirely stingy in that capacity, either.

(Note: Qualifies at DE only in ESPN leagues)

The 26-year-old LB had been on a roll, collecting five sacks in the first seven weeks of this season, before going cold for the five game stretch following the bye week. Until he snagged five (!) sacks in Week 14 on the road against the Giants, where he also forced three fumbles (FF) and had a half dozen QH as well. Add in five solo tackles (two TFL) and he also had a huge fantasy presence at LB for his IDP owners, not that there are (were) all that many: 30% on ESPN, 2% on Yahoo. As with Mr. Young above, do not expect another such prolific outburst although both his upcoming contests are against top teams for LB point production, in the form of the Eagles and 49ers.

Long gets a nod here as a linebacker whose playing time (PT) has been rising over the past three games, following his return to action after a COVID sidelining in Week 11. Every down LBs have value given the injury potential every week, in this topsy-turvy season. He had just five TT in Week 14 against the Jaguars, and the next opponent is not as matchup favorable when the Lions come to town, but he is readily available in the event you are struggling to fill a LB3/4 slot on your roster.

Jordan has logged a sack in back-to-back games over the past two weeks, and now has the Cowboys on tap with an immobile QB to set his sights on. It is his matchup and the potential for big play production that land him on the rising player list, as his tackle numbers are yawn-inspiring.

Parks slid right into the nickel back role for his new team, after joining the Bronco defensive secondary. He had six solo tackles (one TFL) in the contest in Carolina, with a QH and a sack to tack on as big play bonuses. Due to injuries and a suspension to A.J. Bouye , look for him to continue to see significant snap counts going forward in the Denver defensive backfield.

Byard came into this season a big-play producer, but that part of his game has vanished, with no INTs or sacks produced to date in 2020. He is a steady tackle producer, though, and collected 11 TT in Week 14 (eight solo). He is a fine DB in a tackle oriented league, and has a superb matchup at home against the Lions this coming Sunday.

Peppers has become a top fantasy producer at safety, and contributed double-digit TT in Week 14’s contest against the visiting Cardinals (eight solo, two TFL). He also had both a FF and FR in the game, and over the past seven games has snagged 2.5 sacks, 53 TT (37 solo) and an INT to go with the forced and recovered fumble in his recent home game.

Savage is starting at free safety for the Packers, and while that role generally provides for inconsistent tackle production, his numbers have been consistently good for the most part, and he has a decent matchup in store with the Panthers coming to Lambeau fir the Week 15 game. He had a sack and QH to go with eight solo tackles (one TFL) against the Lions on the road last week, and has a similarly favorable matchup on the schedule.

Willis has been inserted into the defensive rotation as an every-down strong safety for the Colts, and as is expected of that role on the defense, puts up consistent tackle numbers week in, week out. Week 15 brings on a so-so matchup in the form of the Texans, but the week after sees the Colts heading to Pittsburgh for a tasty matchup against the eighth most generous offense in terms of allowing safety production on this season. He is coming off a six TT effort (five solo) with an INT that he returned for a TD, as well as tossing in an INT and a pair of PDs.

The Jet CB was sidelined since Week 9, but returned to contribute seven solo tackles. He has a great matchup lined up when the Jets head to the west coast to take on the Rams. Plus, the Jet defensive scheme leads to the corners getting plenty of tackle opportunities due to freedom receivers have to snag passes in front of the drop back corners.

Crossen has the potential to start in place of Phillip Gaines , who is listed as questionable with a knee issue. Although the matchup this week is not tremendously exciting, when the Texans host Cincy in Week 16 he has a great opportunity to put up big numbers. His last effort yielded nine TT (eight solo) with a PD. Keep an eye on the injury report for Houston to see if he gets similar opportunities to show his worth during the fantasy playoffs.

He is seeing significant PT as the nickel corner in the Buffalo defensive scheme, and has been targeted frequently by opposing offenses. He is racking up the tackles and has begun to provide big play value too of late. He was removed from the last game played with a concussion, but has been practicing in limited fashion, so there is hope that he will be able to take the field in Denver this week, for what should be a nice matchup.

Despite leading the Chief LB crew in snaps, he is averaging less than 6 tackles per contest, and as he offers nothing but tackle production for fantasy owners, that simply is not worthy of a valued roster position. There are plenty of other options that will provide more value weekly, and thus, feel free to cut him loose.

There were ideas abrewing that Lawson would step up and fill the position that Carlos Dunlap had been filling for the Bengals, but that has been a false dream. He is coming off a one assist, one QH effort against the Cowboys. In fact, he has had just one sack in the past nine games, and has only one game with more than 2 tackles over that span. Not worthy of an active roster slot, that is the determination.

Means is coming off a big goose egg game in tackle production, or any defensive production so far as fantasy results are concerned. He is dealing with a hand injury suffered in the most recent game against the Chargers, and is questionable this week, although he is not listed in the injury report below. It is possible his lack of production is a temporary blip on the radar, but discretion suggest benching him for now.

Another DE that was absent from the stat sheet in terms of fantasy production in Week 14. He does have a career high eight sacks on the season, but his tackle production is averaging less than three TT per week. As with most players that end up in this section, there are better options available on the wire or the free agent market to use at this essential point of the fantasy season.

None to speak of this week, save for those listed below in the Injury Report.

Remember, the first team listed is the one to use your IDPs against. Do not go crazy, and play a LB5 against the Colts, but certainly you will do well if you own a top DE or S on the Buccaneers or a CB1 or CB2 on the Steelers that you can plug in this week, for the most part.