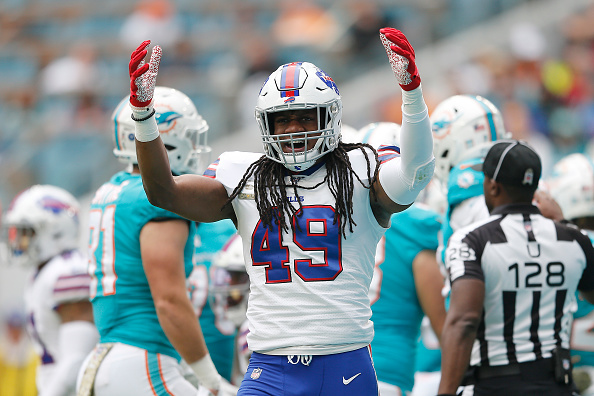 Now that the Wednesday afternoon contest is in the books, let us begin to examine those IDP available that can punch up your roster heading into or beginning the fantasy football playoff season. There are a handful of linebackers and defensive linesmen to consider below, and a fuller slate of defensive backs to explore.

Bye Weeks coming up: Week 13-Carolina and Tampa Bay; no more scheduled byes after this week!

The Lions were a favorable matchup on Thanksgiving for Houston, and Adams was certainly a beneficiary, collecting 17 total tackles (TT), 14 of those being solo takedowns. He also had two forced fumbles (FF) and a pass deflection (PD) against the Detroit offense to open Week 12. The next two weeks are just so-so matchups but he has been contributing on defense at an elite level and should be rostered as soon as you can get to the wire.

Holcomb has gradually become an every down LB for Washington, and contributed with 10 TT in the second Thanksgiving Day game (six solo). One of those tackles was for a loss of yards (TFL) and he also was credited with a QB hit/hurry (QH) on the stat sheet. Week 13 against the Steelers does not line up as a great opportunity for Holcomb but facing the 49ers Week 14 is enticing, and the next game against the visiting Seahawks holds promise, too.

Edmunds went through a slump before busting back into form the past three weeks, collecting 32 TT, a pair of PD and a sack over that period. He had 11 TT this past game (three solo) and now has the Number 2 team in LB fantasy points allowed on slate when the 49ers come calling in Week 13.

The trade of Everson Griffen has resulting in a uptick in PT for the defensive end, and he is heading into a pair of games against teams that allow significant fantasy points to opposing DEs. He had a pair of sacks in Week 12 against the visiting Washington offense, along with a pair of QH and three solo tackles (two TFL). He is a prime candidate for a free agent pickup heading into the fantasy playoffs.

The second-year linesman saw a significant uptick in playing time in Week 12, and responded big time with a FF and two fumble recoveries (FR), a sack and six TT (four solo). After that performance, he should continue to see more time on the field and he now has two excellent matchups in line, with the Saints in town this coming week and then a trip to LA to take on the Chargers.

Kinlaw enjoyed a rare treat for a DL, picking off a pass and returning it for a TD against the Rams. Do not expect such heroics every week, or potentially ever again, but in mandatory DT leagues, he offers weekly tackles and until Week 12, was playing around 60% of the defensive snaps.

The second-year safety collected 10 TT against visiting Washington on Thanksgiving (nine solo), and has snagged 19 TT over the past two contests. With the run-heavy Ravens on tap, look for him to continue to put up serious IDP points in Week 13.

It is not likely he will ever repeat the back-to-back TDs on a pair of FRs, but if you had him in your starting IDP lineup in Week 12, great move. He was not only valuable for the TDs, though, as he collected 13 TT (seven solo), a QH, and a FF to provide overall IDP goodness. He is going to go fast from the wire, so if he is still available, grab him immediately.

Playing at slot corner for the Dolphins, Needham is seeing decent opportunities to collect tackles, including five in Week 12 against the Jets. He also had a PD, giving him four over the past three games. Week 13 has the best possible matchup for a CB possible when the Dolphins host Cincy.

Ryan has been a great addition to the Giant defense, and is on pace to again exceed 70 solo tackles in a season. In addition to racking up six TT against the Bengals (two solo), he also added a FF, FR and a PD to give him overall fantasy value, in big play and tackle oriented formats.

Sherman was a welcome returnee to action in Week 12, totaling seven TT (six solo, one TFL). He also picked off a pass (INT) and deflected one, too (PD). He has three great matchups on the schedule, with Buffalo and Washington coming to visit Arizona (as Santa Clara has evicted the team from their home stadium due to COVID issues), and then a trip to the fourth most generous offense for opposing CBs when the team heads to take on the Cowboys in Texas.

Hall was drafted in the 5th round, but the team released Pierre Desir , and now both Brian Poole and Blessuan Austin have landed on the IR, opening the door wide for the rookie to take the field. He is being targeted by opposing offenses, as is their wont with untested rookies, and thus is seeing tackle opportunities galore. He had six TT (five solo) this past contest, and has amassed 13 TT over the past two games. He has seen the most snaps of all Jet corners since be activated in Week 9, so with his frequent targets by offenses, and the starting status, he is well worth an addition to your roster.

Playing in a time share with David Long reduces his value for IDP purposes significantly. Even with Javon Brown out with an injury, his limited snaps and production mean that you can cut him safely.

He has been less than impressive over the 12 games he has participated in this season, collecting just 50 TT to date. He also is not racking up any significant big play production, which devalues his status as a useful LB in IDP leagues.

Clark was likely drafted by his owners to provide sacks, and he has failed to provide on that front, with just four on the season, and only one over the past seven weeks. He is not a source for tackles, averaging a mere two per game this year. This is not the season to own him, evidently.

Ramsey is a top real-life cornerback, but that makes him less than useful for fantasy purposes. He is not getting enough opportunity to provide tackle numbers or big plays, and thus pales in comparison to other less skilled NFL players, who due to being targeted by the offense, have more opportunity to provide IDP points.

Remember, the first team listed is the one to use your IDPs against. Do not go crazy, and play a LB5 against the Saints, but certainly you will do well if you own a top LB on the Steelers, a Packer defensive end, or a Dolphin corner and/or Detroit defensive back that you can plug in this week, for the most part.

Tremaine Edmunds BUF (Owned in 51% of ESPN leagues, “only” 36% of Yahoo leagues)