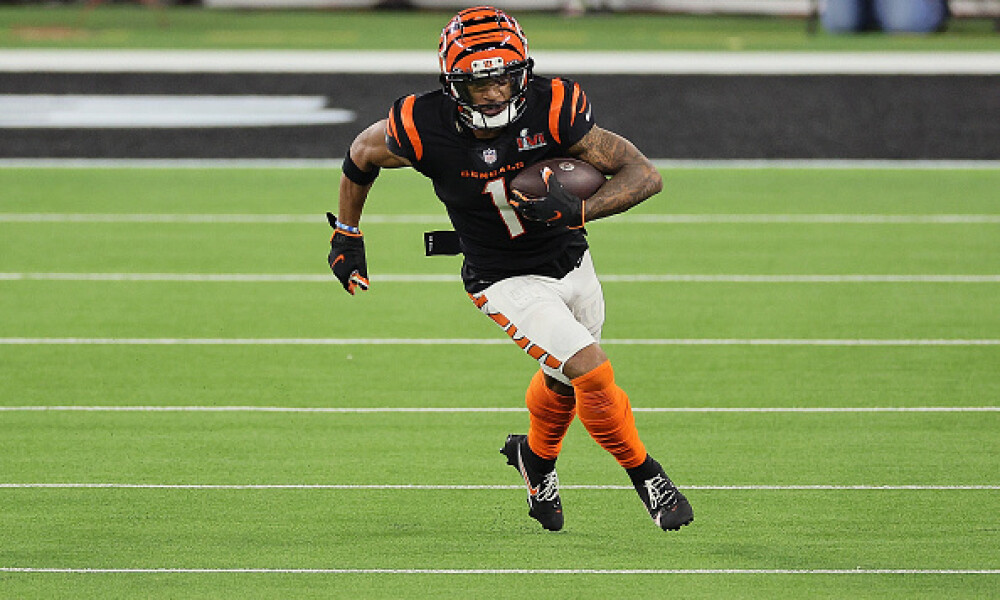 Let’s just take a section of some linear wide receiving rankings as an example. These are based on current Underdog ADP in the early WR3 range from WR 25 to 33 so this could realistically be the rankings of an analyst out there.

Think about how insanely different some of these players are, just in this short stretch. We literally don’t know how many games Chris Godwin will play and, for someone like Amari Cooper, we don’t know how many games Deshaun Watson might miss. So how do we compare them to a steady guy like Brandin Cooks who routinely puts up around 1,000 yards, no more, no less? How do we compare a hypothetical upside guy like Rashod Bateman to the conservative pick in JuJu Smith-Schuster? Or a rookie split end in Drake London to a field-stretching flanker in Darnell Mooney to a low aDot, target-dependent slot receiver in Amon-Ra St. Brown. Those guys hardly even play the same position. It’s a fool’s errand.

Think back to past seasons. Have you ever gone too far in the high-risk, high-reward department and ended up struggling to find starters? Let’s say last year you took Calvin Ridley, an injured Michael Thomas, Brandon Aiyuk in the doghouse, a crazy Antonio Brown, and Kenny Golladay on a brand new team. You didn’t have enough safety to even field a competitive lineup for large stretches. Or you could have been on the flip side. Drafting Keenan Allen, DJ Moore, Christian Kirk, Tyler Boyd, and Jakobi Meyers. Now you are just playing a weekly guessing game with a bunch of medium floor, medium ceiling guys. Cruising along on the commuter rail to third place.

What if I told you there was a better way to look at fantasy football sleepers and busts? To break free from the constraints of linear rankings? Where you can have a better idea of when to take the “best player available” or when to balance safety and upside. Where you can get the right exposure to breakout players without sacrificing the crucial early games of your season. For that, we introduce to you our new Dynamic Rankings!

The idea is pretty simple. Nearly every league has at least two starting wide receivers. Some have three, some might even have four. Maybe you have one flex spot, maybe you don’t have any, or maybe you have a bunch. Regardless of your setup, our goal is to help you build a more dynamic roster that minimizes your risk while providing you the correct exposure to the upside. Because not every league is the same, so not everyone should be thinking the same way. And you definitely don’t want to just draft off some arbitrary list.

Here’s a look at how the dynamic rankings are set up and how to use each section. 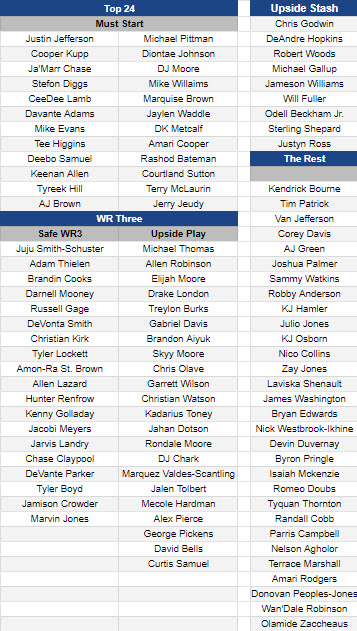 And here is a quick rundown of how the different sections work:

Must Start: Virtually every league has at least two starting wide receiver spots. If you have these players, you find a way to get them in your lineup every week, whether it’s a WR spot or a Flex spot.

WR Three: This is where you need to start considering your league rules and format in who to draft or roster. You don’t want to exclusively have guys from one side or the other. You want some sort of balance.

Upside Stash: Do you have an IR spot? Does your league have deep benches? Or are the starting spots shallow enough that you really just want to maximize long-term upside and ignore short-term production? These guys are typically either injured, suspended, or unsigned so they offer limited usefulness early on but also provide a glimpse of high upside down the stretch.

The Rest: For deep leagues and deep benches, this is how we prioritize the remaining fantasy-relevant options.

This isn’t your first rodeo. You are a Fantasy Alarm member so you take this seriously. So, on top of the classic linear rankings from your favorite personalities like Howard Bender and Adam Ronis, we are offering a new way to look at rankings. And we’ll be there with you every step of the way keeping these updated and offering our advice in the Discord Channel and on the Thursday and Sunday Live Streams to help you craft the perfect roster. If anything, these Dynamic Rankings are just another tool in your fantasy tool chest to help you think outside the box and outsmart your opponent every week. Now let’s win some leagues!