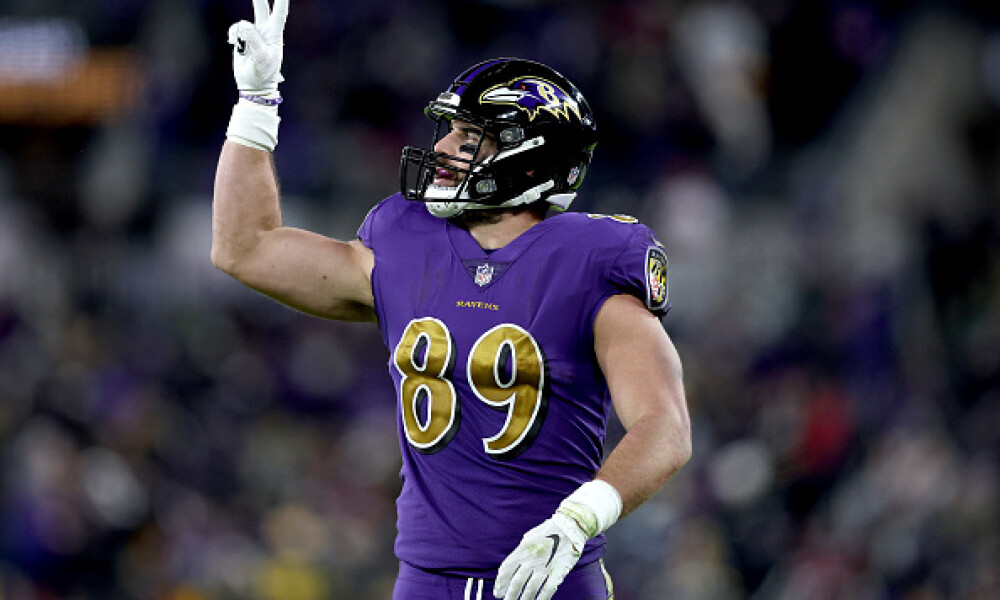 Tight end is arguably the hardest part of your fantasy football rankings. And folks often respond to that by avoiding the issue entirely. They might reach early in their draft for someone like Travis Kelce, Mark Andrews, or Kyle Pitts, sometimes losing value in the process. Or they fall victim to another fantasy football myth; that all tight ends after the top few are the same. They’re all just touchdown dependent and inconsistent. So they just draft whoever and then just leave him in there, hoping their running backs, wide receivers, and quarterback will carry their team. If that’s how you’ve looked at the position in the past, no amount of fantasy football cheat sheets or mock drafts have really been able to save you from yourself.

Fantasy Alarm members, however, know that we’ve found a new way to look at tight end. A late-round tight end drafting strategy that helps you beat the fantasy football waiver wire (or, at the very least, helps you identify the right waiver adds early). For a couple of years now, it’s been our secret weapon in finding fantasy football sleepers. It’s called Yin & Yang Tight End.

The concept is simple enough that you may have even done a version of it in the past without realizing it. Most fantasy leagues are 10-12 team leagues with one tight end. That means, if your tight end isn’t in the top five or six, you have a below-average tight end. That’s Math. The idea for our strategy is that, if you don’t get an elite tight end, you wait and take two. You take one player who is relatively “safe” early on but doesn’t offer a particularly high ceiling (Yin). And you take another that is potentially too risky to start week one but has some path to the high-end upside (Yang). You start the Yin early on in the season hoping that the Yang breaks out. If the Yang doesn’t look like he’s going to hit, you drop him and stash another upside play. Rinse and repeat until you find this year’s breakout.

We’ve done this in the past to find guys like Mark Andrews, Darren Waller, Logan Thomas, etc. If you think back to those seasons, you really couldn’t trust those guys to be your only tight end right from the jump. In hindsight, it seems easy to just draft and start guys like that but that’s ignoring all the hyped-up breakout picks that just did nothing and really hurt your fantasy teams while you scrambled to find a replacement. Looking at you, Jonnu Smith. So, you either needed to draft and stash these potential sleepers or get lucky off the wire. If you were in a league with us, where we were using Yin & Yang Tight End, they were not available on the wire. Because we already drafted them. So it’s high time you joined us in BEATING the waiver wire so you don’t need to leave your season up to chance or spend your entire season starting some boring, low upside option. That’s a great way to come in third place.

To help you with this process, we’ll be providing the Yin & Yang tight end options via our new Dynamic Rankings. If guys break out (or even if Yin guys prove more reliable than we thought) they will get moved up to the Standalone section. After Week One and each subsequent week, we will shuffle around the rankings so that you can create the right balance for your team and give yourself a shot at glory. Here is a look at the system. 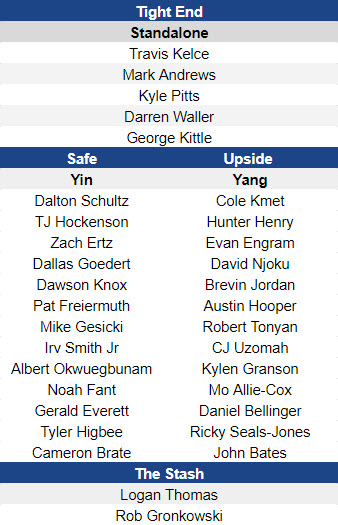 Standalone: If you’ve invested in one of these tight ends, you plan to start them every week. If you have deep enough benches maybe you can hold a second tight end but you only need to plan for their bye. If guys from the second tier prove they are worthy, they will be moved up here.

Yin: This player is safe enough to draft and start week one. But there are factors that might be preventing them from having high upside (not being a top-two target on their team, lack of athleticism, scheme issues etc.) So you still want to be using one bench spot trying to hit on a breakout.

Yang: These are your high-risk, high-reward options. It’s hard to trust them as your starter in week one but some of these guys could either lead their team in targets or at least be second, presenting an interesting path to upside. You stash them to see what it looks like early on then move on to the next guy if need be.

Injury Stash: This section says “injury” but can also be a spot for suspended players or interesting free agents. They have zero viability early but have some sort of long-term upside.

Fantasy Alarm members who have been with us for a while are familiar with this system. They’re obviously advanced fantasy gamers who stopped relying on casual, linear rankings a long time ago. Plus they know that they have access to expert advice either in the Discord Chat or via our Thursday and Sunday LiveStreams every week so they don’t need to go at it alone. If you aren’t a Fantasy Alarm member yet, it’s about time you joined the #FAmily so you can start thinking outside of the box and take your game to a new level. And have a lot of fun with us along the way!