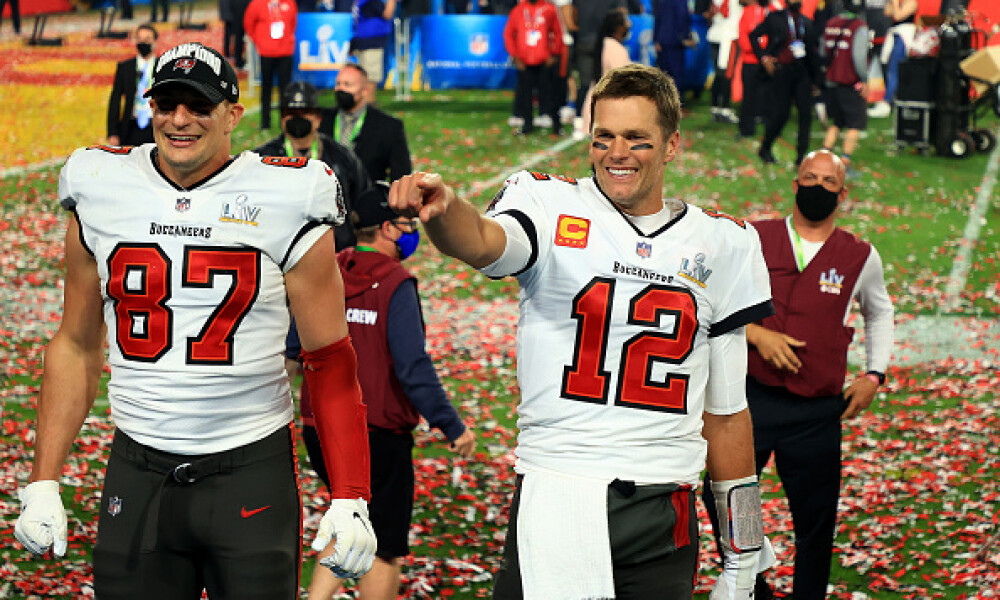 The Fantasy Alarm Draft Guide this season wanted to include some of the #FAmilys finest to write about their favorite teams and as such the Homer Corner was created! With this feature we have longtime #FAmily member JB Barry breaking down his favorite team in the Tampa Bay Buccaneers! Who said being a homer is a bad thing? Let's see what we can expect from the Bucs this season!

The Super Bowl Champion Tampa Bay Buccaneers are the odds-on favorites to not only win the NFC South Division, but also to win the NFC Conference this season. The Buccaneers are returning virtually every member of their championship roster, so the idea that they build off last year’s success is justifiable. Tom Brady still has a stable of weapons around him on offense including Mike Evans, Chris Godwin, Antonio Brown, Rob Gronkowski, Ronald Jones and Leonard Fournette. They also added to his arsenal by bringing in a receiving specialist out of the backfield in Giovanni Bernard to play the “James White role” in a Tom Brady offense. The offensive line, anchored by Ali Marpet, Ryan Jensen and Tristan Wirfs were the unsung heroes last season, keeping Brady upright and out of harm’s way.

On defense, the linebacker duo of Devin White and Lavonte David are arguably the best duo in the league and play behind a fierce Defensive Line featuring Shaquille Barrett, Jason Pierre-Paul, Vita Vea and Ndamekong Suh. The front 7 of the Buccaneers brings pressure to opposing quarterbacks which allowed the young secondary, led by Antoine Winfield Jr and Carlton Davis, to step-up last season and play aggressively. The architect of this fierce defense, Todd Bowles, just had his contract extended and is expected by many to be the heir apparent to Bruce Arians.

With all the pieces returning, there is no reason not to believe the Buccaneers will continue their success and win the NFC South this season, especially with some of the changes amongst the other teams in the division. The Falcons and Panthers are still trying to figure out their semi-rebuild and should still be very beatable. The Saints don’t even know who their quarterback is going to be this season and their star receiver just had surgery and is whining on social media in comic sans. I don’t see any of the other teams in the division having a chance at winning the NFC South and am confident that the Bucs come out on top with around 12 wins this season.

For our fantasy football world, there are an abundance of weapons on this offense who have serious fantasy relevance. Mike Evans and Chris Godwin are both being drafted as top 20 wide receivers at their current ADP and both are top 15 options in Howard Bender’s NFL Rankings here on Fantasy Alarm as well. Antonio Brown is also a solid option, being drafted as a WR3 with serious WR2 upside. With a full training camp and a full year of playing with Brady this season, we could see some vintage AB games in 2021.

The tight end room is a bit trickier with the return of OJ Howard to go along with Rob Gronkowski and Cameron Brate. Gronk is the most notable of the group with his history of success with Tom Brady, but I am a bit skeptical on him from a fantasy perspective. Gronk is a great blocker and has even come out and said how much he enjoys blocking for and protecting his buddy, Tom. With an emphasis on protection for Brady, I fear that we will see Gronkowski blocking more than we would like for our fantasy lineup. He will surely still be a red zone threat, but he is going to be very touchdown dependent in this offense. Make sure you check out the Player Profile on Rob Gronkowski by Colby Conway for more analysis!

I saved the running backs for last since it is the topic that nobody in the fantasy football community likes to talk about when discussing the Buccaneers. The Ronald Jones vs. Leonard Fournette debate is one that seems like nobody ever wins. With current ADPs of 86 and 91 respectively, there is no clear cut “alpha” in this backfield. The Fournette truthers will turn to the playoff performance where he became “Playoff Lenny” and then “Lombardi Lenny”, but prior to that outburst he was very pedestrian during the 2020 season. Fournette only had 3 games with 12 or more carries and only 2 games where he had more than 50 rushing yards in the regular season. He finished the regular season with 97 rushes for 367 yards and 6 rushing touchdowns. On the contrary, Ronald Jones finished the regular season with 192 rushes for 978 yards and 7 rushing touchdowns. He was the back who got the bulk of the workload and eclipsed the 100-yard mark on the ground in 4 different games. Fournette benefitted from Jones having stone hands and was the back who was trusted more in passing situations. I believe the addition of Giovanni Bernard to fill that role this season will chip away from Fournette, not Jones. I’m drafting Jones from this backfield as the lead back who is more explosive and has the big play potential. Running behind this strong offensive line, Jones has the potential to reach the 1,000-yard mark this season.

The Buccaneers are going to be a fun team to watch this season. Luckily for us, we get to see them in 5 prime-time games, including the Thursday Night Football season opener. Not only will the team be fun to watch, but the players will also help propel you to a Fantasy Football championship. Enjoy having a piece of that explosive offense and watching the defending champions in their quest to live up to their mantra of “Going for Two”.