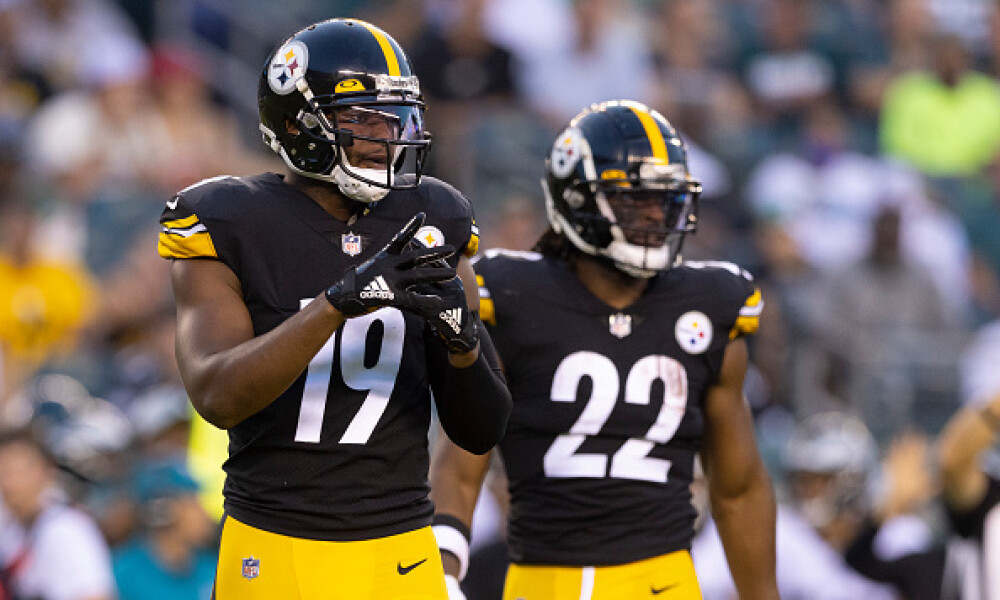 Pierogies, Primanti’s and Pittsburgh Steelers football… welcome to the homer corner western PA style. I feel very honored to breakdown this team for Fantasy Alarm considering I have been spitting at my television since 1995 most Sunday’s much like our Hall of Fame coach Bill Cowher watching the black and gold through the good and bad (It’s been mostly good) and now I get to expel my two cents on the Steelers so buckle up folks and fire up the Styx, here we go!

First thing to remember for the Pittsburgh Steelers is that Mike Tomlin has not had a losing season EVER, yeah what a sabermetric stat that is for you. I don’t think that streak ends this season, even with the Steelers set to play the toughest SOS (strength of schedule) in the NFL this season. With that established I’m taking the over 8.5 wins for the black and gold and locking in that futures bet right away. I also don’t mind throwing money on them to win the AFC North (+500), everyone is ready to anoint the Browns as the new kings in the north, but if you recall the north always remembers and sorry for the low hanging fruit pop culture reference. Every time the Browns are set to rock the boat in the division they get in their own way and the jury is still out on Baker Mayfield, but enough about them if you want to read about the Browns they have their own article in homer corner on the site.

With the futures and overall team stuff out of the way let’s start on our position’s breakdown with QB because why not they are the most important. Not to put it lightly Ben Roethlisberger controls the entire team’s destiny for fantasy owners this season, and I don’t expect the gigantic fall off just yet. Ben knows who he is, and I truly don’t believe he would continue to play if he couldn’t get the job done. The guy threw for 33 TDs in 2020 and was still able to keep the WRs relevant in fantasy, the sky is not falling people… That being said, for fantasy purposes he’s a QB2 because there are just so many other options around the league, I would rank him in the QB 15-18 range for the season with boom and bust weeks. I would take the under on his player prop of 30.5 Passing TDs as well.

On to the running backs, or tail backs as all my yinzer family likes to call the position. Najee Harris is set to be a 300-carry bell cow in the 2021 season, and I think he benefits the most from the OC change to Matt Canada. Canada runs a more diverse system with the bells and whistles and will help get men out of the defensive box this season, that coupled with his zone scheme and what should be a more aggressive blocking system I like Najee in this role.  Count on him to be a low end RB1 right on par with guys like CEH and Joe Mixon, although I feel he out-produces both. Looking at the futures market to have to hammer the daylights out of him to go over 999.5 total rushing yards, with 17 games he must average just 58.8 yards a contest sign me up! Also keeping an eye on Harris going over 44.5 total catches on the season seems like the sportsbook markets are low balling that one. Last thing to add McFarland is the guy to handcuff to Najee this season, Ballage is just #notgood and Benny Snell has fallen out of favor fast.

Now for the interesting part of the article and where most of you probably just scrolled to, the wide receivers! The Steelers have a long-standing tradition, at least since I’ve been alive of drafting and developing wide outs and this 2021 core is no exception. To put things simply, I like Diontae Johnson the most of the three guys in the discussion. He will command the most targets and will haul in between 7-10 TDs this season. I’m not worried about the drops in 2020, he’s got amazing hands and his problem is one of focus and that will improve with experience. Diontae is also the “X” receiver which in the Big Ben offense is the playmaker, see Antonio Brown from 2014-2018 or Mike Wallace from 2009-2012. So the ADP is right, draft Johnson first of the trio in Pittsburgh. Claypool is a different story as he is a freak physically, but I am most unsure of his role in the new offense. Canada loves to run jet sweeps so that is appealing for Claypool and his rushing potential but I really don’t see 11 total touchdowns again, there will be more red zone options in this year’s offense in Pat Friermuth and Najee Harris and won’t need to lean on Claypool as much. I am drafting some Claypool but fading him in most spots given the draft price tag. Lastly, we arrive at our Tik Tok Star JuJu Smith-Schuster. This guy has the safest WR3 floor in fantasy in my opinion with 85-100 catches almost guaranteed out of the slot. I like JuJu in fantasy circles because his receiving average will certainly improve in 2021 and he’s Ben’s favorite of the group. Let’s not forget that he is playing on a prove it one-year contract, always good to have a motivated player on your fantasy team. If any of these guys go down, James Washington is worth an add in deeper leagues or ones where you must use 3-4 WRs.

Touching on the tight ends quickly, the drafting of Pat Friermuth pretty much tanks any relevance in re-draft for him or Eric Ebron in 2021. For dynasty purposes I love Friermuth but this season it’s best to probably just skip on the Steelers TEs.

In closing the Steelers offense won’t be sexy like Kansas City or Buffalo but they will produce and do not be afraid to draft them in fantasy this season. Cheers to everyone on a great 2021 football season and I will see you all in October on the ice for the Wager Alarm NHL action!