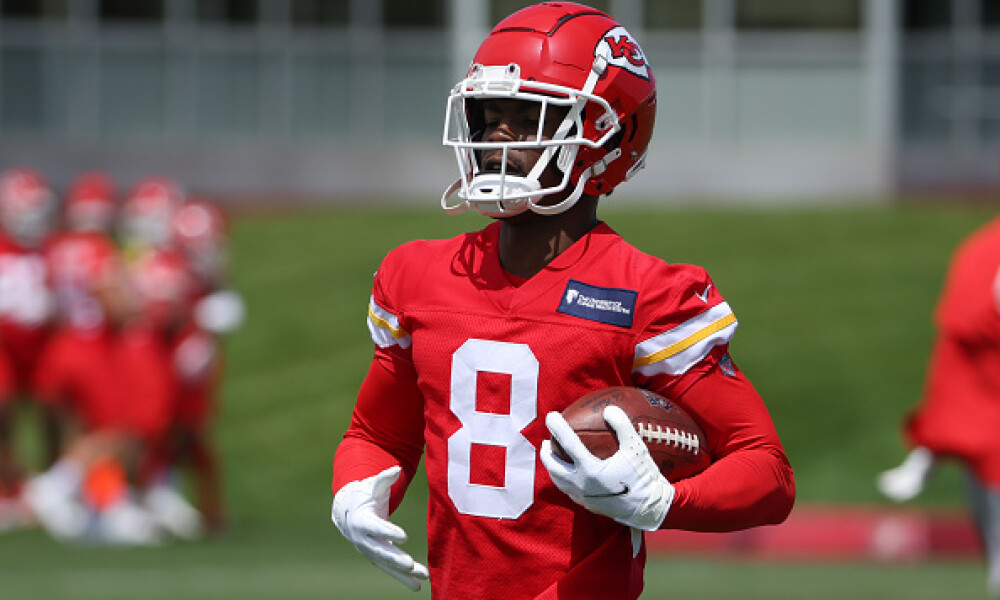 Woods had an interesting path to the NFL. Initially recruited to Oklahoma State as a quarterback out of high school, Woods transitioned to tight end after redshirting his freshman year and had 3 seasons of minimal production playing a hybrid role in Mike Gundy’s offense before transferring to Virginia this past season. He proceeded to exceed his entire OSU career output in one season while being named to the all-ACC team. That momentum carried over to the NFL Combine, where he put up a 4.61 40, 37.5” vertical, 10’9” broad, and a 6.95 3-cone at 6’7”, 253 lbs., numbers that are historic from a size adjusted perspective. The Colts gave him Day 2 draft capital and are an excellent landing spot for him in terms of the depth chart.

Ross is going to be a polarizing player in rookie drafts this summer. After one of the most dominating true freshman performances in recent memory, Ross had an up and down remainder to his Clemson career that included the revelation he had a rare spinal condition that forced him to miss the entire 2020 season and created doubt about his ability to continue playing football. After returning to the field in 2021 with mediocre production, he put up underwhelming athletic testing numbers at the Combine and went undrafted. He chose to sign with the Chiefs and has received positive reviews from the coaching staff and Patrick Mahomes thus far. The chances of him ever living up to the hype from his freshman year are slim, but at this point in drafts owners will start taking risks based on name recognition and perceived upside. I can see him going even higher.

Haskins slots in immediately as the backup to Derrick Henry on a thin backfield depth chart in Tennessee. The Titans invested fourth round draft capital in him after a stellar senior season at Michigan where he put up 1,327 yards and 20 touchdowns on 270 carries (4.9 YPC), adding 18 receptions for 131 yards. It was his only real year of production, however, and we do not have athletic testing numbers for him from either the Combine or Michigan’s Pro Day. He has feature back size and presumably would pick up the bulk of carries if Henry misses any time. That alone makes him worth a pick in this range as running back values are much more elastic relative to landing spot and subsequent opportunity than other positions. A Henry owner could even justify taking him in the third round.

Badie has a lot of fans in the dynasty community. He is undersized (5’8”, 197 lbs.) but put up strong testing numbers at the NFL Combine (4.45 second 40, 33.5” vertical, 10’1” broad). Despite his size, he was efficient (6.0 YPC) even on a heavy workload in the SEC this past season, turning 268 carries into 1,604 yards and 14 touchdowns. Most notably, he had 54 of his 126 college receptions in 2021. That production in the receiving game is very intriguing for his NFL prospects, but the Ravens and Lamar Jackson historically do not target running backs heavily. He also has two capable backs in front of him on the depth chart in J.K. Dobbins and Gus Edwards. Dobbins himself is strong in the passing game while possessing an all-around feature back skillset. Badie checks a lot of boxes and at this point in rookie drafts is a worthy dart throw who could carve out a standalone passing game role, but you are basically banking on Dobbins getting hurt again for him to be a usable fantasy asset anytime soon.

Austin and George Pickens have a similar dynamic to Christian Watson and Romeo Doubs on the Packers as second and fourth round picks respectively, and given the Steelers’ history of developing receivers Austin may have an even better chance of usurping his higher drafted classmate. Austin put up a combined 137 grabs for 2,202 yards (16.1 YPR) and 19 touchdowns the last two seasons at Memphis. He is pretty undersized at 5’8” 170 lbs. but put up insane athletic measurables at the Combine (4.32 40, 6.65 3-cone, 39” vertical, 11’3” broad jump). Given his size, he obviously profiles as a slot receiver, but as indicated by his athleticism and his per catch efficiency he can be more than that when asked to be. Despite his stature, I think he is about as high upside of a receiver as you can get at this point in rookie drafts.

Gray profiles similarly to Austin but with a little more size. At the Combine he put up a 4.33 second 40, 34” vertical and 10’6” broad jump at 6’0”, 186 lbs. In two seasons at SMU, he totaled 82 grabs for 1,251 yards (15.3 YPR) and 13 touchdowns. San Francisco invested a late third round pick in him, which tells me Kyle Shanahan has plans for him in his offense moving forward. No coach in the league is better at scheming touches for his players than Shanahan, and Deebo Samuel and Brandon Aiyuk still remain unsigned long term. Given that draft capital/landing spot, his efficient production, and his athleticism, I would probably take Gray higher than this, but this seems to be about where he’s going. He could end up being a great pick if he does fall to you in this range.

Continuing with the theme of slightly undersized receivers in a good situation, Shakir stands 6’0” 196 lbs. and ran a 4.43 second 40-yard dash at the NFL Combine. He led Boise State in receiving the last two seasons, including a senior year where he racked up 1,117 yards (14.5 YPR) and 7 touchdowns on 77 receptions. The Bills took him in the fifth round of the draft and while they may present a crowded depth chart at the moment with Stefon Diggs and Gabriel Davis, being tied to Josh Allen and this offense for at least the first four years of his career is a huge plus. Don’t expect him to have too much production this year, but he’s a great candidate to marinate on your taxi squad if you have the room.

Ingram was one of my favorite running back sleepers before the draft. After productive freshman and sophomore campaigns at Texas, Ingram was forced into a timeshare with future NFL star Bijan Robinson before transferring to USC for his senior year. He became the Trojans’ leading rusher while continuing to display strong receiving ability for a back his size (6’0”, 221 lbs.). His sixth round draft capital is a damper on his prospects, but his landing spot should provide him with an opportunity at some point to prove himself. Only Eno Benjamin and Darrel Williams stand between him and a perpetually banged up James Connor on the depth chart. I doubt he’ll ever be a long-term starter in the NFL, but he should provide enough production to justify a pick at this point in rookie drafts.

Pacheco fell to the seventh round of the draft after a career of lackluster production at Rutgers (career 4.3 YPC). He is interesting from a size an athletic profile perspective, however, after timing a 4.37 40-yard dash at 216 lbs. at the Combine. The Chiefs running back position has been a source of fool’s gold for the last few years as fantasy managers have chased a host of disappointments in what should be fertile ground for fantasy goodness. I am by no means saying Pacheco will be bucking that trend but given the struggles of this position group in recent years, it would not be surprising to see him get a crack at it in some point in the future. His physical stature stands out among Kansas City’s other backs, and he did have 47 receptions in college.

Chandler started his career as a Tennessee Volunteer, never putting up a season of meaningful production during his four years in Knoxville. Taking advantage of the NCAA’s flexible eligibility in 2021 due to Covid, he transferred to North Carolina to fill the void left by Michael Carter and Javonte Williams. He made the most of that opportunity with 1,092 yards and 13 touchdowns on his 182 carries (6.0 YPC), which led Minnesota to take him in the fifth round after he put up a 4.38 40 at the Combine. While he never had more than 19 receptions in a season, its worth noting he had 73 catches in his college career. The Vikings have a crowded and talented backfield depth chart, so his opportunities are going to be limited out of the gate.

Like Chandler, Harris is going to have an uphill climb against the depth chart he landed on early in his career. The former South Carolina Gamecock joins a crowded Patriots backfield that is shaping up to have very defined roles, and it remains to be seen if Harris will even be dressed on game days his rookie year. Still, I like his profile better than some of the other backs expected to go in this range of rookie drafts. His age adjusted production in the SEC stands out, especially his 185 carry, 1,138 yard (6.2 YPC) and 15 touchdown season as a 19/20 year-old sophomore where he also added 21 receptions. I would expect next to nothing from him this season, but he is a worthy stash as the Patriots continually turnover at the position rather than pay incumbent starters at or above market value.

Ruckert’s production profile (career totals of 54 receptions for 615 yards and 12 touchdowns) leaves a lot to be desired, but he is one of my favorite late round players this year and received Day 2 NFL draft capital that should entice dynasty owners to invest in his potential. Ruckert made a bevy of timely, dynamic plays for the Buckeyes in big moments that make me think he has more to offer in the passing game than his college box scores would indicate. He is the youngest tight end in the draft and is a proven in-line blocker that will get him on the field quickly for the Jets, who may have a suddenly fantasy-friendly offense if Zach Wilson is able to progress. I think he will take the more traditional tight end path of delayed production at the NFL level, but that he is worth stashing as a very good real life football player who should be in the league for a long time.