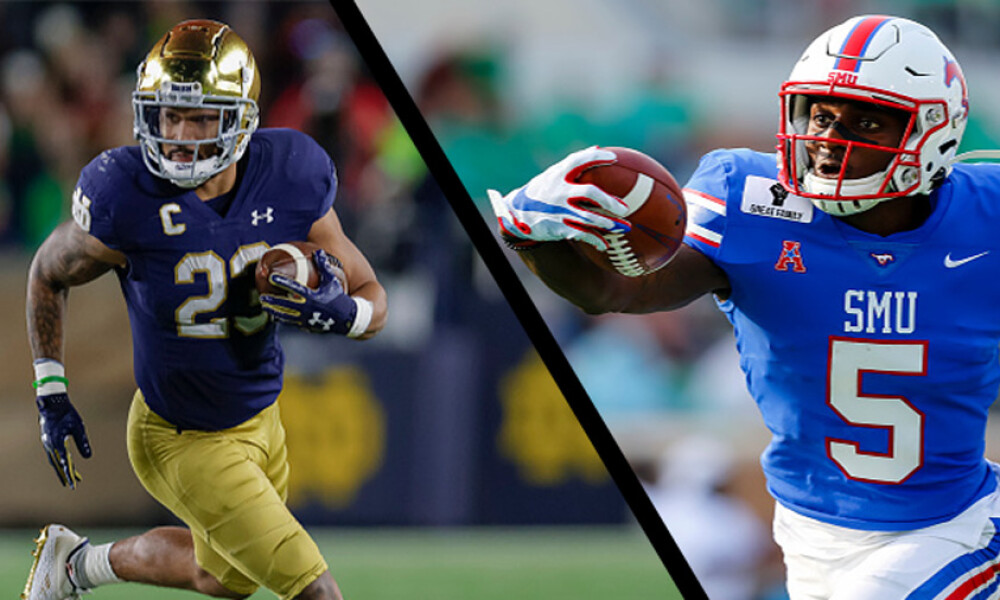 With the 2022 NFL Draft now over, it's now time to take stock in every pick and where the top college football players landed. Whether you play in a fantasy football dynasty league, are taking part in mock drafts, or are just a fan of an NFL team, it's important to know which NFL Draft picks will impact both the upcoming season and the future of franchises. Before you participate in dynasty rookie drafts or look at fantasy football rankings, be sure to stay up-to-date on how the draft shook out for every team across the league. Let's now hand out draft grades for the NFC West teams by looking at some best and worst picks for the Arizona Cardinals, San Francisco 49ers, Los Angeles Rams, and Seattle Seahawks.

If you're looking for NFL Draft grades for other divisions or teams, check out my other breakdowns:

The Cardinals came into this draft desperately needing pass rushers and Cameron Thomas can contribute immediately along the defensive line. He had 10.5 sacks and 20.5 tackles for loss last year at San Diego State as a productive and disruptive defender. Thomas also has the versatility to line up at multiple D-line positions, which is especially crucial to help spell J.J. Watt. Interestingly enough, Thomas has been compared to Watt at times – even by Arizona GM Steve Keim – and it sounds like Watt is fine with it:

It’s hard to call a seventh-round pick a bad one, but Arizona’s selection of Jesse Luketa was a bit unnecessary. After taking two edge rushers in the third round (Cameron Thomas and Myjai Sanders), the Cardinals didn’t need to take another one. They could’ve used this pick to address another position of need, add depth somewhere else on the field, or take a flier on another skill player. Instead, Luketa profiles as just a special teams player in his rookie season.

The Cardinals’ draft was overshadowed by the trade for Marquise Brown, who’s even more important now following DeAndre Hopkins’ suspension. The front office is clearly trying to give Kyler Murray as many weapons as possible and Brown brings familiarity and connection to Murray from their days at Oklahoma. Plus, Arizona’s second-round pick of Trey McBride will bring another receiving weapon into the mix and form a nice 1-2 punch at tight end with Zach Ertz. The Cardinals took chances on a few guys with later-round picks, and this draft class could be a huge win if USC RB Keaontay Ingram, Virginia Tech OL Lecitus Smith, or Oklahoma OL Marquis Hayes can develop into real contributors.

The reigning Super Bowl champs already had a contending roster filled with veteran talent, so they had the luxury of taking chances on guys in the later rounds of this draft. Daniel Hardy is one of those who could develop into a legit contributor in a year or two and prove to be a massive value from the seventh round. Hardy has freakish athleticism out of Montana State but his smaller frame and raw pass-rushing skills are why he went so late. Still, his measurables are comparable to the elite edge rushers of this draft class – a 4.64 in the 40-yard dash, 40-inch vertical jump, and 6.71 three-cone drill (the fastest among all incoming rookie edges and linebackers).

The fifth-round value for a talent like Kyren Williams is nice, but the Rams didn’t really need another running back. Cam Akers and Darrell Henderson are the 1-2 punch while Jake Funk and Xavier Jones are still around. Williams profiles as a third-down, pass-catching back but is now in an offense that didn’t pass it to the RBs much last year. Depth in the backfield is never a bad thing, but maybe Los Angeles could’ve gone another direction in the fifth.

First off, it’s worth understanding that the Rams didn't have a pick in the top 100 and previously traded away their early-round selections for guys like Matthew Stafford and Jalen Ramsey. With an older roster filled with win-now vets, Sean McVay and the front office weren't necessarily looking for immediate contributors in the draft and instead took upside guys or depth picks. Plus, the Rams had four picks across the sixth and seventh rounds – so it remains to be seen how they turn out. With all that being said, third-rounder Logan Bruss could challenge for a starting spot on the offensive line. Besides him, there's potential in Decobie Durant, Quentin Lake, or Derion Kendrick becoming a legit factor in the secondary. For now, it's wait-and-see. For what it's worth, the Rams arguably “won” the draft with this video.

Amidst all the Deebo Samuel trade rumors and contract negotiations, the 49ers got a steal at wide receiver in the third round. Danny Gray is a burner who ran a 4.33 in the 40-yard dash and his field-stretching ability will add another playmaking element to the San Francisco offense. He brings an explosive skillset to the receiving corps to complement Samuel, George Kittle, and Brandon Aiyuk. If Samuel does end up departing at some point, then Gray could emerge as a top receiving weapon for Trey Lance in the near future. Just check out Gray’s highlights while at SMU. He could end up being a steal of this draft as the 17th wideout off the board.

The San Francisco backfield continues to be a fantasy football nightmare. Even with Elijah Mitchell, Jeff Wilson, JaMycal Hasty, and Trey Sermon still around, the Niners spent a third-round pick on yet another running back. Tyrion Davis-Price is talented, no doubt, and could end up being the team’s starting RB at some point this season. Still, Kyle Shanahan and the 49ers have prided themselves on finding diamonds in the rough at the running back position and those later-round picks or undrafted players have gotten the job done. It’s even more mind-boggling once you remember San Fran drafted Sermon in the third round last year.

Despite not having a first-round pick, the 49ers made the most out of their seven total selections. Edge rusher Drake Jackson in the second will add more firepower to the defensive line and the USC product could end up being one of the top pass-rushers from this draft. We mentioned Gray looking like a steal in the third. Samuel Womack and Tariq Castro-Fields are upside Day 3 corners and give San Fran more depth in the secondary. Even though Davis-Price was a bit unnecessary, he'll make the rushing attack better nonetheless.

Everyone knows about Sauce Gardner, but the guy who anchored the other cornerback spot for Cincinnati was Coby Bryant. He's a physical, tough corner with a 6-foot frame that'll translate right over to covering NFL wideouts. Plus, Bryant won the Jim Thorpe Award – given to college football's top defensive back – not Gardner, Kyle Hamilton, Derek Stingley, or anybody else. The only reason he dropped to Day 3 was that he tested poorly. Still, Bryant fits the profile of physical corners with high football IQ that Pete Carroll likes and teams should be kicking themselves that they passed on him. If you needed any more convincing, Coby is named after the late Kobe Bryant and he even changed his number for the College Football Playoff matchup vs. Alabama to channel some “Mamba Mentality.”

Don't get me wrong, Kenneth Walker is a stud and should be a top dynasty rookie draft pick this year. Similar to the 49ers, though – did the Seahawks need to spend high draft capital on yet another running back. Yes, the Seattle offense is clearly going run-heavy with an uncertain QB situation and Russell Wilson gone. But that second-round pick could've been used to address a different position with so many holes on the rebuilding roster. For fantasy, though, Walker should be the starter over Chris Carson and Rashaad Penny. It's just that there was so much talent available early in the second and the Seahawks didn't NEED an RB there.

Seattle came into this draft with plenty of needs across the roster while in rebuild mode. On the surface, before these rookies play an NFL game, the Seahawks did an excellent job of drafting from need and building for years to come. First-round pick Charles Cross and third-rounder Abraham Lucas can ideally be the offensive tackles of the future. Second-round edge Boye Mafe brings plenty of upside, while Bryant and fifth-round corner Tariq Woolen could help Pete Carroll recreate Legion of Boom 2.0. Even though drafting Kenneth Walker in the second is questionable, he's arguably the best back of the draft class and will go a long way to Seattle's run-first attack. The only position they didn't address was quarterback, but it seems Carroll and Co. are perfectly content rolling with Drew Lock and Geno Smith this season before possibly finding the next franchise QB in next year's draft.