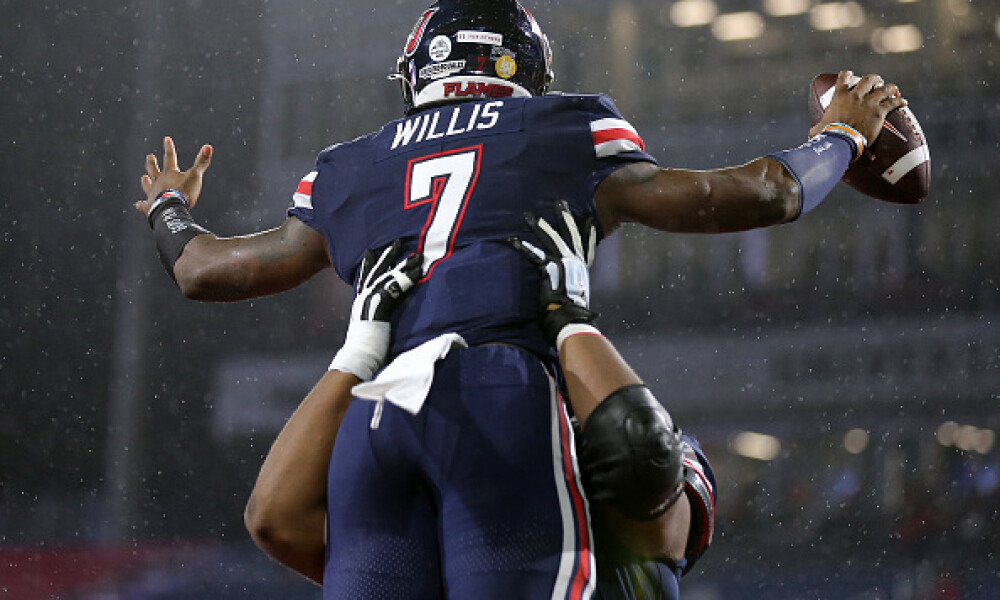 The 2022 NFL Draft is just days away! Millions of mock drafts have been done, and we’re all on the edge of our seats waiting to see where our favorite rookie prospects will go. While some of these spots could be great in a real-life NFL setting, landing spots can drastically affect a rookie’s success in a fantasy football sense. For example, last year, Najee Harris went to the Pittsburgh Steelers where, even with a bad offensive line, he had no competition for carries and finished the season as RB3 in PPR leagues. On the other hand, Javonte Williams, the second-ranked dynasty running back prospect behind Harris, went to the Denver Broncos where he competed for touches with Melvin Gordon. Williams ended the season as RB15 in PPR formats. Fantasy football is all about opportunity, and we hope the NFL Draft is kind to our favorite rookies. Here are some of the best landing spots where these rookie prospects could immediately produce in fantasy football.

After a stellar showing at the combine, Malik Willis put his name at the top of the list of quarterback prospects in the 2022 NFL Draft class. His arm strength is insane, and he has the ability to scramble out of a broken play. The Seattle Seahawks are arguably the most quarterback-needy team in the league this season after trading Russell Wilson for Drew Lock, and Willis could be an immediate starter.

Pairing Willis with big speedy receivers like D.K. Metcalf and Tyler Lockett would be a thing of beauty to watch, as they can stretch the field and allow Willis to air out the football for big plays. While a place like Detroit or New Orleans may be ideal for a developmental perspective, Seattle is clearly the best spot for Malik Willis to land for immediate fantasy value.

Breece Hall has all the traits you want out of an NFL running back, and he also possesses elite speed that makes NFL scouts salivate. Hall led the FBS in rushing yards in 2020 and finished in the top ten in 2021. He is also a capable receiver, racking up over 300 yards in the air in 2021. Since he’s such a desirable prospect, Hall’s landing spot could be anywhere, but where would he be the most productive in fantasy football?

The Buffalo Bills have been searching for their bell-cow running back, drafting Devin Singletary and Zach Moss in consecutive drafts, but neither of them has a firm grasp on the role. Buffalo ran the third-most plays per game in 2021 at 67.1, with nearly 41% of these plays being run plays. They also made improvements to their offensive line by signing guard Rodger Saffold III in free agency, a substantial upgrade over Jon Feliciano and Daryl Williams. Hall could immediately slide in as the lead back with Singletary picking up the complementary duties. The kind of workload Hall could command in Buffalo would be fantasy gold at the position.

Much has been made of Kenneth Walker’s ability, or lack thereof, to catch passes, leaving many fantasy football aficionados concerned about his value in both dynasty and redraft formats. You can argue that he just wasn’t used that way in Michigan State’s system, but for brevity’s sake, say he can’t catch.

Where could he make an immediate impact? The Philadelphia Eagles are the first team that comes to mind that would be an ideal landing spot for a pure runner like Walker. Although at first glance it seems like the Eagles have a crowded running back room, Miles Sanders has dealt with his fair share of injuries, missing nine games over the past two seasons, and Boston Scott and Kenneth Gainwell are primarily used in a pass-catching role. The Eagles also run the ball at the highest rate in the league, utilizing the rush on just under 50% of their offensive plays. Walker is two inches shorter than Sanders, but weighs the same and runs faster, so it’s conceivable he could take over the starting job sooner rather than later.

After the departure of Davante Adams, the Green Bay Packers are in serious need of wide receiver help. They signed Sammy Watkins and retained Allen Lazard and Randall Cobb, but they are still in need of a true WR1. Treylon Burks is the kind of receiver who would automatically be a productive playmaker on this offense, and he would have fantasy value in spades. Having a multi-MVP in Aaron Rodgers is obviously a huge plus, but Burks offers positive traits in his own right. He led the SEC in receiving in 2021 with a primarily run-first team at Arkansas, and at 6’2” and 224 pounds, he has a similar body type to Adams. Burks is extremely good at creating yardage for himself, averaging 9.3 yards after the catch in 2021, and with his on-field speed, he could put up similar, if not better, numbers in Green Bay. There really isn’t another team in the NFL with such a clear path to immediate playing time and offensive efficiency as Green Bay, and Burks would put up monster fantasy numbers in this system.

Michael Thomas is set to return to the field this season, but let’s face it, he hasn’t been fantasy relevant since 2019. There is room for a new WR1 in New Orleans, and Drake London is a perfect fit. He’s a physically imposing receiver at 6’4” and 213 pounds, and Jameis Winston has a history of developing quick chemistry with big body receivers a la Mike Evans. London was number one in the country in contested catches in 2021, and although there are questions about his ability to separate, he’s clearly shown that he can come out on top in 50/50 balls. The Saints did rank 30th in passing plays per game last season, but that was likely due to the personnel they had at the wide receiver position rather than an offensive philosophy. London showed he could produce with sub-par quarterback play at USC, and he has a path to putting up more impressive numbers with the Saints.

Despite drafting Zach Wilson as the second overall pick in last year’s NFL Draft, the Jets neglected to surround him with weapons. Any receiver would be an immediate starter on the team, but Garrett Wilson would be the best fit in this system. Jamison Crowder departed in free agency, and Corey Davis was often hurt, so Wilson could become the WR1 on the team rather quickly. He is an elite route-runner with 4.3 speed along with separation ability, and he produced from all over the field. The Jets played from behind a majority of the season, causing them to throw the ball over 63% of the time, so there will be plenty of opportunities for Wilson to produce for fantasy football.