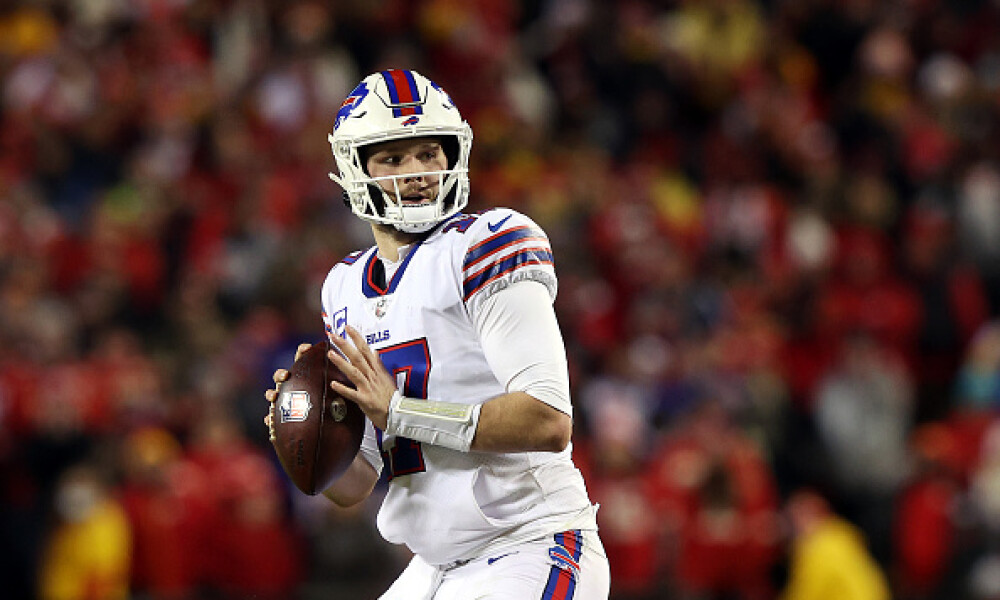 Before the 2022 NFL Draft commences at the end of the month, we’re continuing the dynasty fantasy football coverage here with some dynasty fantasy football player rankings and tiers to help those dynasty managers sort out their player evaluations and get a view of how players are ranked. Since the Super Bowl, NFL Combine, and NFL’s free agency, we’ve covered the beginnings of joining dynasty leagues and covered some of the finer points of the dynasty format to help you get your feet wet.

In these tiers for the quarterback position, many factors came into play with grouping these quarterbacks into tiers. These tiers are based on several factors, including (in no order):

Having that baseline projection of tiers and rankings at your disposal helps you decide between one or more players in your startup drafts.

Note: Listed with each quarterback is their age in September 2022, when the NFL season begins.

Allen and Mahomes have the long-term security with huge contracts extending through to the latter part of this decade, and Herbert should join those two in securing a big contract soon. All three carry huge weekly upside and are cornerstones of dynasty rosters. These quarterbacks (in any order) are the consensus top-three in Superflex startup drafts.

TIER 2 - “Next Best, With No Long-Term Contract”

These three quarterbacks are the consensus next three picks in Superflex startup drafts after Allen, Mahomes, and Herbert. They are excellent in their own right with huge upside but have a slight wrinkle surrounding them to push them into the second tier. All three have yet to secure a long-term contract with their teams. Jackson’s 2019 season was transcendent, but would it shock you that Jackson has only had four QB3 or better weekly total in the last two seasons? Jackson dealt with some injuries in 2021, but no quarterback carries the upside he does.

Burrow could begin to challenge the top-tier dynasty quarterbacks with the cache of elite weapons at his disposal and increased rushing ability. Burrow’s 2021 pedestrian rushing totals (7.3 rushing yards per game, total) could be forgiven after a mid-season ACL injury in 2020, but it would take a prime Aaron Rodgers-like efficiency year after year to vault Burrow into the top tier of dynasty quarterbacks.

Murray has weekly overall QB1 upside, but injuries haven’t exactly helped him reach that next level, and it leaves you wanting more. The Cardinals need to improve their pass-catchers to help give Murray a chance. DeAndre Hopkins is a great option, but he’ll be entering his age-30 season. Arizona brought back Zach Ertz, which helps as he was TE6 in fantasy points per game following his acquisition from Philadelphia. Ertz is 31 and will be 32 by the end of 2022, so needing a breakout from Rondale Moore or somebody not currently on the roster will help Murray’s overall outlook, especially if the Cardinals extend Murray to a long-term contract.

Watson deserves his own tier because he, as the kids say, “secured the bag” and has long-term security in Cleveland. He’s likely to be suspended for a portion of 2022. There could be off-the-field controversy as Watson is still facing 22 civil lawsuits. It’s a fluid situation, and it may take the offseason to find out just how long he could be suspended, but there is precedent to Watson being suspended without any formal charges brought against him. Former Pittsburgh quarterback Ben Roethlisberger was suspended by Roger Goodell and the NFL for six games for violating the NFL's personal conduct policy which stemmed from a 2010 alleged sexual assault, where Roethlisberger was never formally charged.

That said, Watson’s on-field value and dynasty valuation could bounce back close to his peak in Houston. Watson hasn’t played an NFL game since January 2021, so it could take some time for Watson to round into form.

It feels weird to call Prescott a “veteran,” but he’s entering his seventh season as the Dallas quarterback. His ankle injury in 2020 has taken some of the shine off of Prescott’s overall dynasty profile, as the rushing component Prescott displayed in his early career has withered away. Still, he’s a solid dynasty asset at quarterback who earned a long-term deal, so he has a good deal of job security.

Wilson and Stafford are locked-in low-QB1 options, and Wilson will look to do what Stafford did in year one: revitalize his career in a new city. Wilson gets a slight downgrade in weapons but a much better offensive line. We’ll see if new head coach Nathaniel Hackett and offensive coordinator Justin Outten #LetRussCook in 2022.

Stafford looked right at home for the entirety of 2021, and the best thing about it was that the Rams and GM Les Snead provided weapons and gave him everything he needed to lead the offense. Of course, having an all-time season from wide receiver Cooper Kupp certainly helps matters.

These five quarterbacks represent the “Konami Code” quarterbacks fantasy managers look for - young, mobile quarterbacks with rushing upside that can help buoy one’s fantasy points floor if they don’t have a great day passing the ball. All five haven’t shown enough production to be considered in the top tiers but have the ability to do so. All but Hurts were consensus top-three overall rookie draft picks the last two seasons and are either growing into their role or, in the case of Lance, haven’t gotten the starting nod yet.

For Hurts, he represents the closest rushing upside to Lamar Jackson. He is proof you do not need to be a particularly good NFL quarterback to be an elite fantasy option or dynasty quarterback. There seem to be yearly rumors of Philadelphia either drafting a quarterback or acquiring one, but Hurts remains in this tier for now.

Both Rodgers and Brady are year-to-year values at quarterback, who could retire at any time. We already Brady retire and return once, so anything is possible. They’re easy trade targets for contending teams looking to make a championship run. Both represent zero rushing upside but are both steady QB2 options with weekly QB1 value. Just get Rodgers some weapons, please?

TIER 6 “Promise and Production - All With Warts”

This tier was probably the most challenging tier to rank, as I don’t think Wilson belongs in Tier 4, and I certainly wasn’t going to put him in with Rodgers and Brady just because he’s entering his age-23 season. Same with fellow 2021 draft class quarterback Mac Jones, whose cupboard is still pretty bare in terms of weapons - though the acquisition of DeVante Parker from Miami helps to a degree.

Besides Wilson and Jones, it’s a relatively unsexy tier, though Carr did get a bit more shine to his name after the Raiders traded for Davante Adams. Carr tier jumping is possible with not just Adams, Waller and Renfrow, but new head coach Josh McDaniels tying everything together.

These quarterbacks have to be looking in the rear-view mirror at any potential challengers to their spot. Rostering these quarterbacks is one thing - they’re all slated to be their team’s starter in Week 1. But starting them is a different animal altogether. Of this tier, I think Trubisky has a real chance to surprise and have a “Tannehill-esque” career revival if he’s still the Pittsburgh starter when the season ends. The Texans gave a vote of confidence to Mills, but they’d be wise to explore anything that comes to them in the draft as far as a higher-upside signal-caller for the future. This season is a turning point for Jones, whether he can be a franchise quarterback or cause the Giants to spend high draft capital on an arm for the future. Jones should have 2022 as the starter, but the bottom may fall out permanently for Jones’ dynasty value if he falters.

Names like Lock and Darnold are starters in name only, as another quarterback could replace any of them. However, priority backups like Minshew and Huntley have a decent amount of value - especially Huntley, who put up a QB1 overall week late last season and showed the rushing ability we’re ultimately looking for.