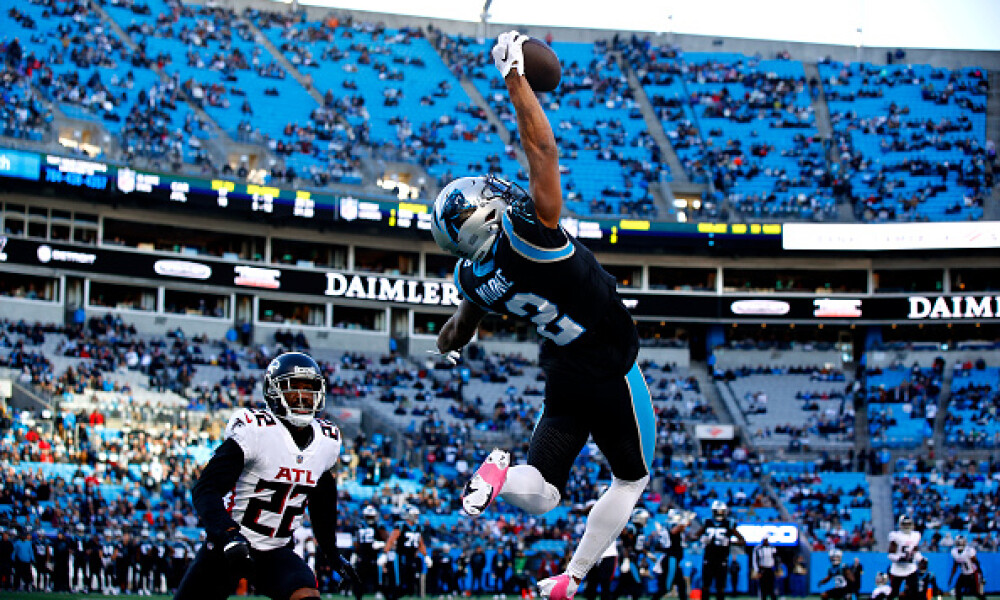 The NFL offseason is chugging along at a pretty brisk pace; it seems like just yesterday that the playoffs were just starting. NFL free agency has come and gone, while the NFL Draft is less than two weeks away now. The NFL season is no longer just a fall and winter league - the rise in popularity of Best Ball has given fantasy football managers the opportunity to draft teams at any point in the offseason. What better way to stay connected to player movement and values than getting into an Underdog Best Ball league?

Previously, we looked at value quarterbacks on Underdog and Andrew Cooper researched and uncovered some value tight ends. Today, we’ll be looking at some values at the wide receiver position based on ADP (average draft position) and highlighting the best bang for your buck when drafting a wide receiver.

Of course, there are the best of the best fantasy football wide receivers - Justin Jefferson, Ja’Marr Chase, Davante Adams, etc. - but they all come at the cost of significant draft capital. So let's get into some excellent Underdog value plays at the wide receiver position.

The talent is undeniable for DJ Moore. Moore was a 2018 first-round pick, and he’s been productive every season since entering the NFL. Sporting an elite prospect profile that includes a 97th-percentile Breakout Age, 100th-percentile College Target Share, and a 98th-percentile College Dominator rating (all per PlayerProfiler.com), Moore has been featured as Carolina’s top pass-catcher since 2019.

Moore has had every opportunity in this Panthers offense to flash and become a top-flight fantasy football option. While he’s done so at times, fantasy managers are left wanting more and hoping that “this is the year” Moore takes that next step into the elite tier at the position.

So, what’s holding Moore back?

He'll now have Matt Corral waiting in the wings to sling passes, which is an excellent sign for not just Moore but also Robby Anderson and Christian McCaffrey. The lack of quality targets (70th in the league in 2021) being thrown at Moore despite earning the sixth-highest target total (162) in the NFL makes Moore’s PPR WR23 finish in fantasy points per game (FPPG) even more staggering.

Moore capably earns targets despite the quarterback issues - notching a 2021 season-long 26.2% targets per route run (TPRR), good for sixth among all wide receivers. TPRR is an important metric because it directly correlates to how well a wide receiver earns targets when he’s on the field. In addition, Moore’s WOPR (Weighed Opportunity Rating - which combines target share and air yards share into an efficiency metric that takes both target and air yard shares into account with his team’s overall opportunity) was in the top-five among wide receivers - just trailing 2021 studs like Justin Jefferson, Davante Adams, Cooper Kupp, and A.J. Brown.

When Darnold opened 2021 guns blazing (QB5 in FPPG from Weeks 1-4), Moore was at the forefront of that hot start, averaging 22.4 FPPG and starting the first four weeks of the season as fantasy football’s WR4. From Week 5 onwards, Moore was WR28 with 11.4 FPPG.

Moore can be a top-6 fantasy football wide receiver if the quarterback position stabilizes, whether through Darnold or the newly-drafted Corral. It may not have gotten worse than last season, so I’m happy to take him between WR16-19 (or later) to get a potential league-winner.

It seems like so long ago that Allen Robinson was as trusted a wide receiver as you could find in fantasy football drafts. As a consensus third-round pick in PPR formats the last two offseasons, Robinson was our generation’s DeAndre Hopkins - a professional wide receiver that still thrived despite the lack of skill and talent from the quarterback supplying him the ball. In 2019 and 2020, Robinson reeled off at least 150 targets and an average of 100 receptions despite receiving passes from Mitchell Trubisky and Nick Foles - in a Matt Nagy-run offense.

Robinson’s career could have had an even earlier, loftier ascension after being selected in the second round of the 2014 NFL Draft. His 2015 season saw Robinson tie for the NFL league lead in touchdowns with 14 and rack up 1400 receiving yards. That put Robinson on the fantasy football radar in his second season as a Jaguar. 2016 (PPR WR24) was a step back from 2015's fantasy top-six season, but Robinson was primed to recapture his 2015 magic. Unfortunately, 2017 saw him completely tear his ACL early in Week 1 against the Houston Texans and that derailed his career trajectory quite a bit.

Robinson’s opportunity in 2021 dwindled to the point where some were even asking if Robinson could be drafted in fantasy. Fantasy managers could not start him, but it may not have been all his fault. The offensive philosophy for the Bears shifted to a run-focused attack, but with rookie quarterback Justin Fields learning the ropes, Matt Nagy put training wheels on him - just like he did with Trubisky early in his career.

Robinson’s lost season ended as fantasy football’s PPR WR81. After two consecutive seasons of Robinson reaching at least 150 targets, Robinson only received 66 targets, at a clip of just over 5.5 per game in 2021. Yikes.

Robinson now gets a chance to go west to Los Angeles and join the Rams, where he will get an opportunity with Matthew Stafford and, as Harry would say in Dumb & Dumber: “Totally redeem yourself!”

Robert Woods is out of town as he was shipped off to Tennessee. Odell Beckham Jr. could find his way back to the Rams, but he’s coming off of an ACL tear in the Super Bowl, so if he does, he won’t factor into offensive plans until mid-season at the earliest. Cooper Kupp, Van Jefferson, and Tyler Higbee exist, but this is close to the perfect situation for Robinson to get back to being a yearly fantasy football stalwart. No NFL team used more 11 personnel and three-wide receiver sets than the Rams did last season - which is not likely to change in 2022. 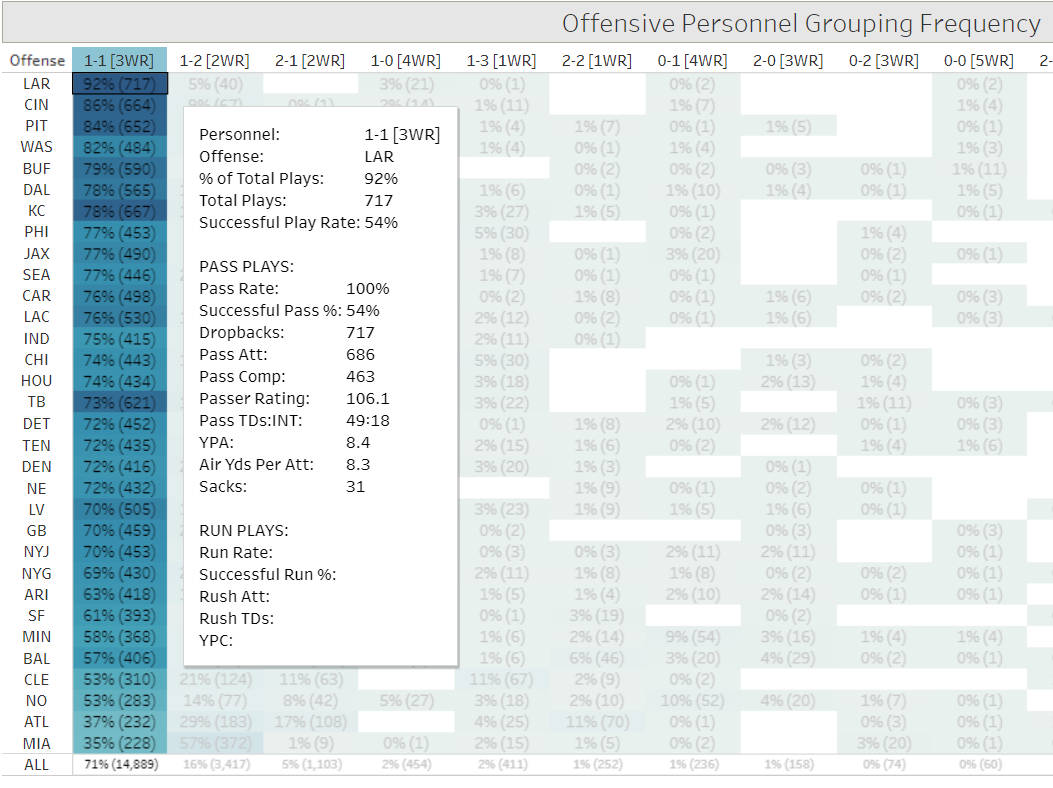 Robinson is still only 28 years old and is now playing with the best quarterback he’s ever played with. If he can get back to being the consistent, steady WR1/WR2 fringe player we know he can be and has shown he can be, Robinson will be one of the biggest bargains at his current WR43 ADP in Underdog Best Ball contests.

Courtland Sutton came into the league as a high second-round draft pick. He broke out his second NFL season with 126 targets, 1112 receiving yards, and a half-dozen touchdowns. Everything looked rosy until Sutton tore his ACL in Week 2 of 2020, ending his season before it began. Sutton put together a solid season with 58 receptions, 776 receiving yards, and two touchdowns in 2021. The surface stats don’t paint a great picture for Sutton’s future fantasy value, but the underlying statistics and a quarterback change brighten up Sutton’s outlook for 2022.

While 2021’s surface stats painted a pedestrian picture of Sutton’s season, Sutton was 12th in the NFL in total air yards and first in average depth of target (aDOT) with a minimum of 60 targets. Additionally, PlayerProfiler’s Target Quality Rating has Sutton as the top wide receiver in that metric - which combines catchable targets with average target depth to put a premium on deep, catchable targets. Add in Sutton finishing as PPR WR62 in FPPG (8.8) and the addition of Russell Wilson, and this potential connection could get spicy in the best of ways.

The phrase “a rising tide lifts all boats” couldn’t apply more to the 2022 Denver Broncos’ outlook, especially in fantasy football. The addition of the former Seattle Seahawk quarterback Wilson should propel Sutton, Jerry Jeudy, and Albert Okwuegbunam to their best NFL and fantasy football seasons yet. Of course, Wilson could return to the fantasy elite at the quarterback position after a subpar 2021 marred by a thumb injury. He’ll likely be asked to throw the ball more than ever - certainly more than last season, as the 2021 Seahawks ran the fewest average plays per game in NFL by a pretty sizeable margin.

Sutton’s value should surpass WR45, and after the NFL Draft, I can only see that number climbing as we get closer to the 2022 season. The buzz on the Broncos will reach its apex during the summer’s peak draft season. So if you’re drafting on Underdog and looking to get out ahead to capture some of the spring’s best pre-draft values, Sutton should be on your shortlist with the other two wide receivers we profiled - Robinson and Moore.