2022 Best Ball Fantasy Football Quarterback Busts: Should We Invest in Trey Lance at His ADP? 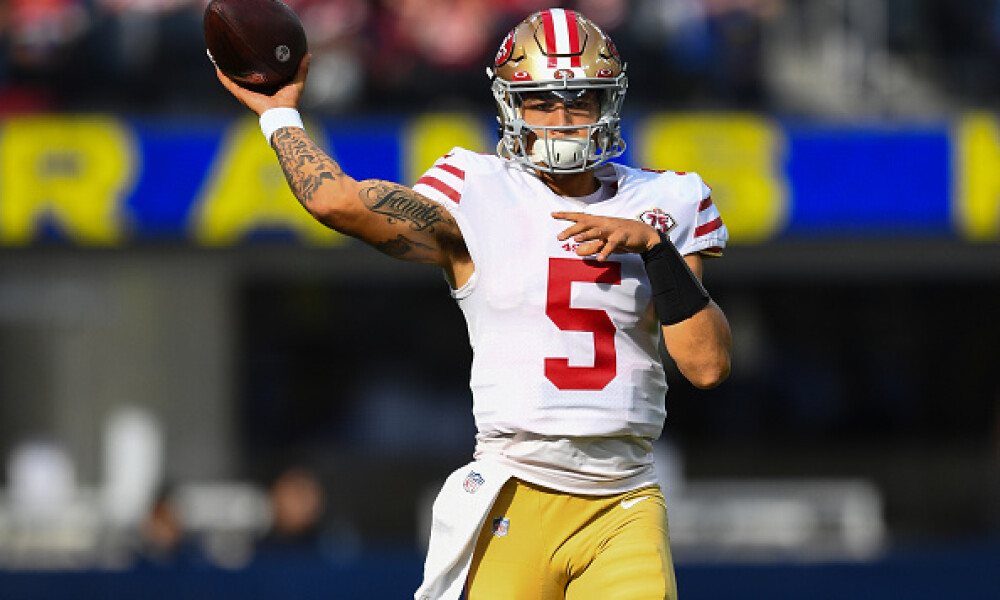 I hate to admit it but sometimes you have fantasy football seasons where a quarterback just comes out of nowhere and wins you the trophy, almost singlehandedly. Anyone who drafted Cam Newton in 2015 when he threw 35 touchdown passes and ran for another 10 knows what I’m talking about. Patrick Mahomes in his first season as the starter was going well outside the top 100 picks at this time of year in early fantasy football mock drafts and wasn’t even drafted to start for fantasy teams. Then he threw 50 touchdown passes. Lamar Jackson in 2019 is another. Game over. You really just need to draft a serviceable team at the other positions if you hit on that kind of quarterback sleeper.

On the flip side, investing a high draft pick into a quarterback that doesn’t deliver can absolutely devastate your season. The running back rankings and wide receiver rankings can be quite top-heavy and your opportunities to nab studs are fleeting. In a best ball tournament like Underdog’s Best Ball Mania III, you need to finish in the top 99.9% so you can’t afford to blow it. What CAN help you afford your Underdog entries, is using promo code ALARM at signup where they will match up to 100% of your first-time deposit with bonus credits. See what I did there?

Once you are signed up and ready to go, take these quarterbacks and just wipe them off your board at their ADP. There just isn’t enough upside to be worth the floor. Especially since we are going to provide you with comparable players you can draft later.

This might be borderline blasphemy to some. Top five quarterback every season? Capable of 50 touchdown passes? Shared the cover of Madden with Tom Brady? He’s been the league’s golden child for the last half decade and the standard for “elite quarterback”. But as our own Britt Flinn broke down in a full article already, it’s not all sunshine and rainbows for Mahomes.

I encourage you to check out that article in full but the short and sweet of it is that the conditions for Patrick Mahomes have changed and, with that, so must our projections. Everyone knows Tyreek Hill is gone but familiar faces like Demarcus Robinson, Byron Pringle, and Darrell Williams were also poached away this offseason. There can be growing pains at times with players that are new to the system and the Chiefs have an entirely new slate of them in JuJu Smith-Schuster, Marquez Valdez-Scantling, Skyy Moore, and Justyn Ross (who might not even be cleared for contact due to a congenital spinal issue). I understand these guys can all play but none of them are Tyreek Hill. If Marquez Valdez-Scantling was going to be something special you'd think he would have done it with the back-to-back MVP in Aaron Rodgers.

Britt also mentions Mahomes’s inconsistency from week to week (which we don’t mind in best ball honestly) but one thing she doesn’t touch on is a narrative that we once saw with Peyton Manning and the Colts. Like Mahomes, Manning had to put the team on his back in years like 2004 when he threw 49 TDs and the team went 12-4. The following year they improved to 14-2 but he only threw 28 TD passes. Why? The run game and the defense improved. They no longer need to rely on Manning’s arm alone. The Chiefs not only drafted defensive end George Karlaftis in the first round but traded up to get corner Trent McDuffie as well. They now have a stout offensive line featuring Orlando Brown, Joe Thuney, and stud center Creed Humphrey and they added Ronald Jones in the run game for good measure. If I’m drafting a quarterback at QB2, I need him to either be running for hundreds of yards or throwing 40-50 TDs. I’m just not quite sure Mahomes is in line for that kind of season. What did Patrick Mahomes do last year that Matthew Stafford didn’t do? And you can get Stafford 50 picks later.

I fully understand the upside for Trey Lance. There is no substitution for a quarterback who is capable of running the ball 16 times in a game which is something we saw Lance do in his limited starts last season. And folks have been heaping praise on him this offseason from NBC Sports’ Peter King to 49ers legend himself Steve Young.

But even when you look into those comments from the people seemingly in Lance’s corner, it gives you a glimpse of the concern. Peter King, who named Lance one of the NFL 22 most influential people for 2022, had this to say, per Kyle Madson:

“I just want the football world to keep this in mind about Trey Lance: He’s 22. He threw 318 passes in his college career, at a level below the top level of college football, at North Dakota State. And he played sparingly as a rookie in San Francisco. He needs time to develop, to make mistakes, to make dumb throws, to not have judgment passed on him after a three-interception game in Week 3.

And Steve Young’s warning/criticism was even more concerning. His quotes were essentially that Trey Lance has “raw upside” and that he is “actually processing as well as anybody” but that he needs to work on physically delivering the ball to receivers. That the issues he’s seen are “more of a throwing thing than a mental thing”. I’m pretty sure the single most important thing a quarterback does is physically deliver footballs.

Now, I completely understand taking a shot on a young, 22-year-old, mobile QB with limited experience as my second or even third quarterback in a best ball draft. But the hype surrounding this guy has him currently going off the board in the QB1 range. You tell me you have an offense built to run the ball (not just with running backs like the three they have drafted over the last two years but with wide receivers like Deebo Samuel) and it’s going to be captained by a guy who needs to develop his ability to throw the football and that’s simply not a bet I’m making as my first quarterback off the board. Rather than reach for the second-year quarterback that we’ve seen nothing from yet, why not wait and take another mobile option in Justin Fields 40 picks later? Or a second-year player who is better at “physically delivering” the football like Trevor Lawrence? To me, it’s a lot less risk with similar potential rewards.

Honestly, sometimes fantasy football does not need to be that hard. The Green Bay Packers needed to figure out what direction the team was moving in. Should they go all in one more time or try something a little more sustainable? They decided to clean up the roster a bit and go with something more sustainable. They cut some gaudy contracts like Za’Darius Smith, traded Davante Adams, and signed their quarterback Aaron Rodgers to an extension that would keep him around for multiple seasons rather than “one last hurrah”.

With that, however, they’ve built a less than inspiring offense in the short term with a combination of aging veterans like Randall Cobb and Sammy Watkins, unproven youngsters like Amari Rodgers and Christian Watson, and steady journeymen like Allen Lazard. Not only is Davante Adams gone but their second-leading receiver for the last couple of years in Marquez Valdes-Scantling is also gone. As well as their offensive coordinator Nathaniel Hackett and their quarterback coach Luke Getsy. Their starting tight end is coming off an ACL tear. If this team is going to win now, it’s going to do so based on defense and the run game which isn’t particularly inspiring for a non-mobile quarterback.

The real difference maker for me, however, when it comes to Rodgers’ ADP and the best ball landscape is stacking. We really don’t know who the top targets will be in this offense. Lazard has been steady yet boring. As have Sammy Watkins and Randall Cobb. Christian Watson is incredibly raw coming from Division II and has reportedly been struggling with drops in early practices. We did a full breakdown of how crucial stacking is in fantasy football and how you can engineer your draft to ensure you end up with beneficial stacks. Not only is there uncertainty surrounding who you should even stack with Rodgers but the ADPs for the top options (along with Rodgers) are so close together that you either need to reach for someone or risk missing out. For instance, Allen Lazard is going at pick 94, Aaron Rodgers pick 103.3, and Christian Watson at pick 108.4. If you have the swing pick in that range, perhaps it’s reasonable to pull the stack off with bang-bang picks (though that typically means you are reaching slightly on someone). Otherwise, you risk missing the mark completely.

I’d much rather just take Derek Carr at QB14 who now has three pass catchers all better than Rodgers’s best one in Davante Adams, Darren Waller, and Hunter Renfrow. Or you can hit a much more predictable and reasonable stack in a similar price range by taking Adam Thielen and pairing him with Kirk Cousins at QB15. Kirk Cousins actually threw for more yards than Aaron Rodgers just last season and he still has his top weapons in Thielen and Justin Jefferson- unlike Rodgers who lost Davante Adams and his 123 receptions for 1,552 yards and 11 touchdowns.