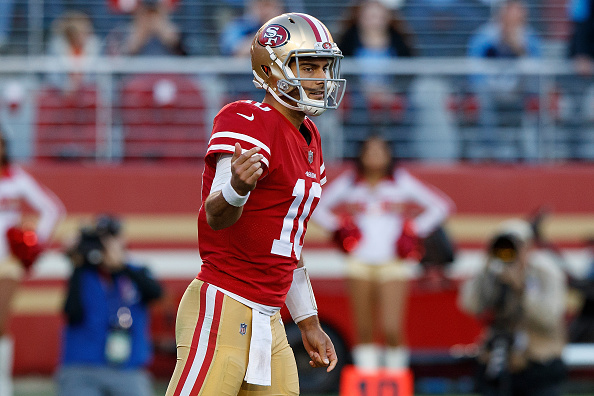 San Francisco quarterback Jimmy Garoppolo has millions in the bank despite making just 10 starts in the National Football League. He’s played in 26 total games, and after two wins in New England, he parlayed it into a starting gig with the 49ers. Oh yeah, and nice contract, too! Garoppolo is entering his sixth professional season and will be turning 28-years-old in November, and while he has proven that he can win football games, he has yet to prove that he can a difference maker for fantasy owners. In five games with the 49ers in 2017, he threw just seven touchdown passes. Last season, before going down with the torn ACL in his left knee, he slung five touchdown passes in three games. His 5.6 percent touchdown rate would have placed him 11th in the National Football League, tied with Baker Mayfield . In 2017, his touchdown percentage of 3.9 percent would have ranked 24th this past season. The fantasy community was rather high on Tom Brady ’s supposed protégé, but this season, the lust isn’t there, as Garoppolo is currently QB20, per NFFC average draft position (ADP) data.

Garoppolo has dealt with numerous injuries in his young career, limiting him to a season-high of six appearances and five starts in any single season. That’s a knock on Garoppolo, and seeing as he just tore his ACL last year, there’s cause for concern heading into this season. At time of writing, there was no guarantee that Garoppolo would be ready for the season opener. Also, let’s take into account the fact that the young signal caller took a whopping 13 sacks through the first three games last year. Only Russell Wilson took more during that span! Well, the primary players from the line last year are coming back in 2019, so to say that there are some concerns with the protection for the team’s franchise quarterback is a massive understatement.

There were some positives in his brief time in 2018, as he posted the eighth-highest average depth of target (aDOT) through the first three weeks, per Pro Football Focus. His 5:3 TD/INT ratio is okay, considering he faced admirable passing defenses (Vikings and Lions) in the first two weeks. However, there were other more glaring factoids from his 2018 season.

Here are a few:

Also, here is something a bit crazy, and actually quite alarming. Compare the three players below:

Yes, from a few sentences above, you can make the correct assumption that Quarterback #3 from the table above is Garoppolo. Do you happen to know who the first two are? They are his teammates C.J. Beathard and Nick Mullens ! Yes, Garoppolo didn’t even average the most fantasy points per game on his own team last season, and he even had the smallest sample size! WHAT!? That’s concerning. Furthermore, after averaging 308.4 yards per game and posting a 67.0 percent completion rate in five games in 2017, those numbers fell to 239.3 yards per game and a 59.5 percent completion rate through the first three games in 2018.

It’s not all doom and gloom for Garoppolo in 2019. There are some positives for him.

His head coach and play caller, Kyle Shanahan, is an offensive guru. Under Shanahan’s control, his team has produced a top 15 passing attack each of the past four seasons. He’s done it with a quarterback better than Garoppolo (Matt Ryan ), but he’s also done it with guys who are far less talented or “toolsy” than Garoppolo. The trio of Garoppolo, Beathard and Mullens would have been a high-end QB2 in fantasy last season, with George Kittle as the only healthy and consistent receiver for the entirety of the season.

Garoppolo has an offensive-minded coach with a track record of fantasy success, and the health of the receiving core should be in his favor. Kittle cemented himself as an elite tight end, receivers Dante Pettis and Marquise Goodwin should prove to be reliable pass-catchers for Garoppolo, and the trio of Tevin Coleman , Jerick McKinnon and Matt Breida should keep defenses honest. Furthermore, San Francisco’s defense won’t be among the league’s best, although they should be better than last season. This leaves the door for open for some shootouts, which are typically fantasy gold mines.

He’s currently the 20th quarterback off the board and has the potential to crack the top 12 at his position. However, he should be drafted as a QB2, not your team’s primary option at the position.