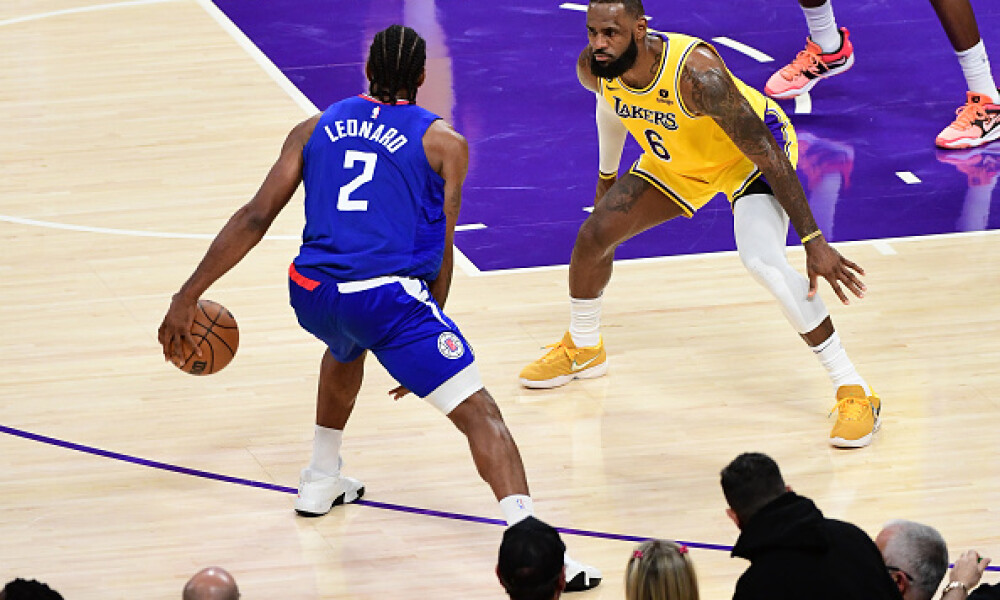 We have an interesting matchup for our DFS Showdown slate tonight. It is the Battle of Los Angeles as LeBron James and the Lakers are taking on Kawhi Leonard, Paul George, and the Clippers. The Lakers look to snap their nine-game losing streak that they are on against the Clippers.

Be sure to check out our NBA DFS projections, powered by FanJections, NBA DFS Lineup Generator, and all of the rest of our NBA DFS content and tools! Let's break down Dylans' top picks of the day for the DFS showdown slate DraftKings and FanDuel!

Lebron heads into this game as questionable as he seems to be every night. The Lakers are on a front end of a back-to-back so I would imagine that he will suit up in this contest and more than likely sit during tomorrow's contest. Lebron has scored over 60 fantasy points in four of his last five games. He has the highest ceiling on the slate tonight and should be your captain.

Over the last three games with Paul George back in the lineup, it looks to be Kawhi who is the alpha in this offense. He has played at least 36 minutes in three-straight games and has scored over 49 fantasy points in two of those three games. Kawhi has also been on a tear scoring the basketball as well, scoring at least 24 in seven straight games. On incredible efficiency as well shooting at least 50% in all seven of those games.

Westbrook is coming off a clunker in which he shot terribly. He shot just 3-13 scoring just six points but he still dished out five assists and grabbed eight rebounds to salvage his night for fantasy purposes. He is in the MVP portion of this over Paul George because he just has a higher ceiling than George does. I do not mind the play of Westbrook tonight,

George has been fine since coming back from his hamstring injury. He is averaging 16-6-5 and 35 fantasy points. His ceiling each night doesn't seem to be there however with Kawhi Leonard in the lineup as well. Leonard has outscored George in each game since he has been back. I am not telling you not play him on this slate, but he is a little too pricey for my liking at $10,000.

With Paul George back in the lineup Norman Powell was moved back to the bench. Terence Mann has been starting at the defacto point guard spot, but Powell has played more minutes than him in three-straight games. Powell has just been killing it offensively scoring at least 16 points in seven straight games. I am in on Powell tonight as you should be as well.

Thomas Bryant just exploded again in the Lakers last game going for 31-14 and finishing with 55 fantasy points. He had been trending in the wrong direction before that game as he hadn't played more than 22 minutes in the four games prior. Wenyen Gabrial had been eating away at his minutes, and I am not sure why, Bryant is the superior player.

Shroder has played at least 33 minutes in three of his last four games and has put up great numbers in back-to-back games. He put up 46 and 49 fantasy while dishing out eight assists in each game. The glaring number that sticks out is that he has gotten to the line 10 times in his last two games as well. That may not continue, but if Schroder keeps attacking like this he is a good play.

With all the wing issues the Lakers have, Troy Brown might be your best option as we wait for the debut of Rui Hachimura in a Lakers uniform. Brown has scored at least 15 fantasy points in five straight with three games over 20. He doesn't have the ceiling you would like, but he should get some extended run in this after they traded away Kendrick Nunn yesterday.

It was hard picking between Batum and Covington but I ultimately ended up going with Batum, just because of the consistent minutes he gets. Batum has played 20 minutes or more in nine straight games. He has finished with 20 or more fantasy points in three of his last five games and that could continue tonight. Batum is a knockdown shooter and has at least four three-point attempts in four of his last five. If he keeps getting fed open looks from Kawhi, and George, Batum will continue to be a solid play at $3,600.

Join the Discord and get your NBA DFS and Fantasy Basketball questions answered by our Fantasy Alarm experts!