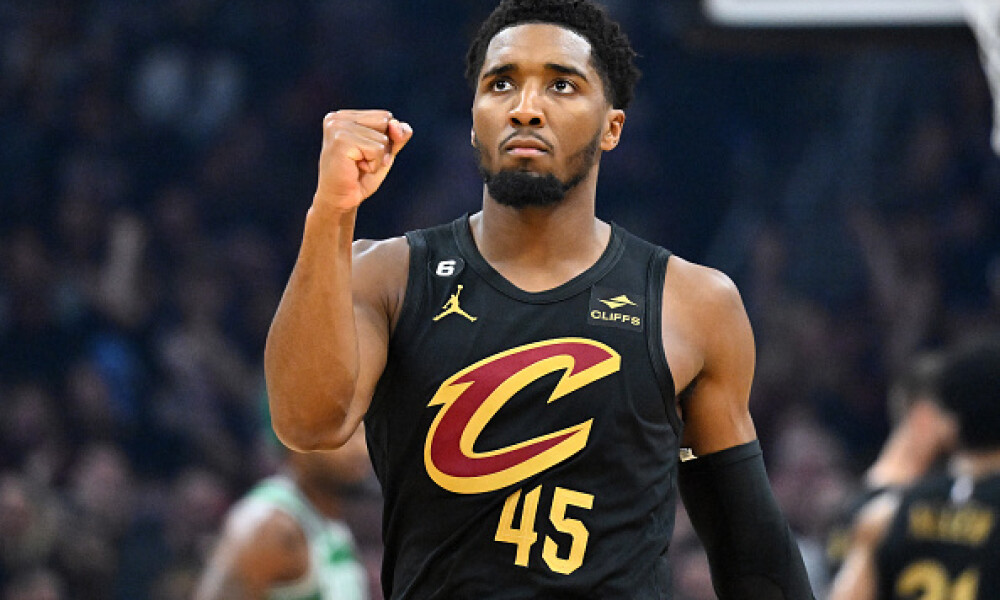 In a DFS showdown battle between two of the NBA’s toughest defensive teams, there are still plenty of offensive options to create a variety of showdown lineups tonight. Paul George, Donovan Mitchell, and Darius Garland highlight an all-star matchup tonight in Los Angeles. Here are the NBA DFS top plays we can invest in for our lineups on FanDuel and DraftKings!

The MVP question tonight in Showdown lineups is not whether you will have Paul George on some rosters, but rather how much Paul George is too much. He is far and away the most talented player available on his team, there is no Kawhi Leonard to take away touches, and he has more than 45 fantasy points scored in three of his last four games. Defending small forwards is the weak link in the Cleveland defensive armor as they that position to score almost 24 points per game against them. George had a pretty terrible streak of two games, but random poor shooting was to blame and he has fully busted out of that mini-slump lately.

Mitchell may not be putting up nearly 60 fantasy points every night like he was when Darius Garland was on the sidelines, but he has established a nice baseline of expectations between 45-50 points nightly even with another high-usage player in the same backcourt. Mitchell has scored less than 25 actual points just one time all season and the Clippers allow top-five production in both points and three-pointers to the shooting guard position.

This is a sneaky opportunity to get Garland for slightly less than Caris LeVert while the pricing algorithm still adjusts to Garland being back in the lineup after his opening-night eye injury. In the two games since his return, Garland averages 40 minutes and 50.8 fantasy points per night. That Garland can still put up 26.5 points and 9.5 assists per night with Mitchell there alongside him just shows what kind of player he is evolving into. With so much inconsistency at the position to start the year, the Clippers are a bottom-seven team against point guards.

Zubac is in for a very tough matchup tonight against the twin towers of the Cavaliers, but his salary has dropped $1,000 since he was on a Showdown slate with the Rockets last week, and he has scored at least 34 fantasy points in three of four games. The best thing going to Zubac, however, is his minutes. He has typically been a 25-minute-per-night player in his career. But in those recent three big games, he is averaging over 33 minutes on the floor.

With John Wall and Kawhi Leonard out and Reggie Jackson battling nagging injuries, the Clippers’ offense has been searching for some signs of consistent play, and they have found it most recently in Morris. He has not scored less than 21 fantasy points yet this season and averages 33 fantasy points per game over his last three. If we want a couple of the elite players in this game, we are going to need plenty of reliable options at Morris’ price range, and he fits that bill perfectly.

Speaking of consistency, how about Jarrett Allen who averages 33 fantasy points on the season and has been between 34 and 39 fantasy points each of his last three games? He is likely not going to be a mega-high ceiling play at $8,000 on DK, but the high floor is usually worth paying for. For Allen it’s all about how much he can contribute in boards and blocks. The Clippers are just 15th in defensive rebound rate and all the way down at 29th in offensive rebound rate, so Allen should have no problem cleaning the glass tonight.

Mobley is slightly more boom-or-bust than Allen on most nights. We have seen him as high as 43 fantasy points this year and as low as 23. But I’m predicting he will be on the higher end of that tonight, facing a Clippers squad that gives up one key advantage in the power forward department. Marcus Morris is not a post-up, back-to-the-basket player. As a result, the Clippers allows the most rebounds in the league to power forwards (12.85 per game) while also letting them go off for 19 points and 1.5 blocks per game.

Kevin Love isn’t technically a dart throw as he is one of the more established players in the NBA and a sixth man of the year candidate, but he is simply too cheap for what we have seen him do recently. In his last four games, Love has a 51-point outing and a 44-point outing under his belt, with some games also in the 20’s thrown in there. To have that kind of ceiling at just $5,600 makes him ideal tournament or Showdown target. He actually leads the team in rebound rate and is second in fantasy points per 36 minutes.

Terance Mann is likely starting for the Clippers in this game and is $2,600. It really shouldn’t get more complicated than that. In his start last night, he played 30 minutes and put up 26 fantasy points while he was $3,400. Now he is much less and should get all the minutes he can handle, especially if Luke Kennard sits out tonight’s game. Mann will likely be the most popular Utility player in this Showdown slate tonight.