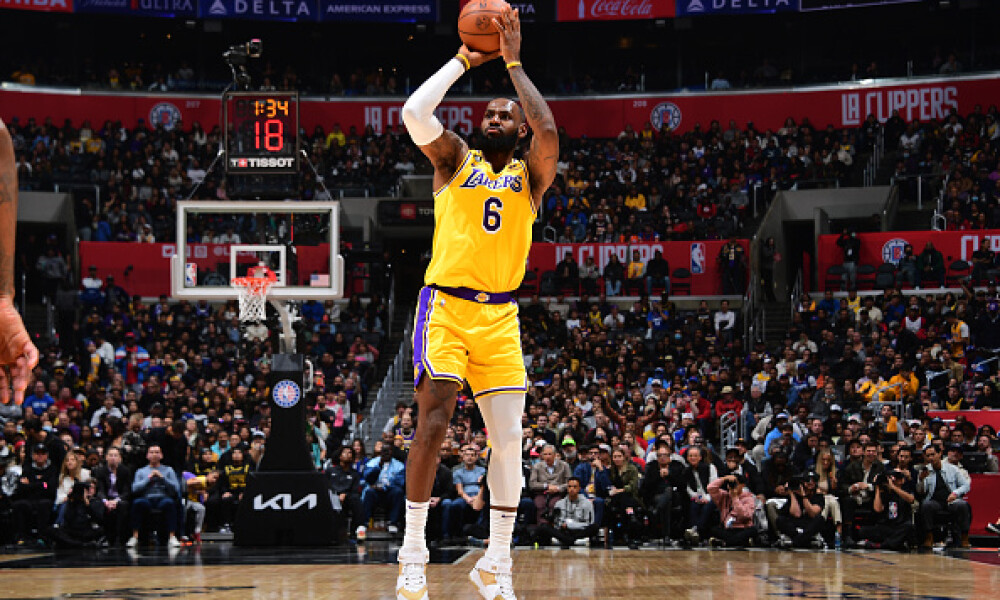 The Los Angeles Lakers come into Wednesday’s home matchup with their two superstars healthy, but the Blazers should be ready for the challenge. Portland features a number of reasonably-priced role players led by Anfernee Simons and Jerami Grant. The two high-dollar Lakers should make for interesting lineup decisions and sacrifices will have to be made somewhere. Here are the NBA DFS top plays we can invest in for our lineups on FanDuel and DraftKings!

While LeBron James was nursing an injury, Anthony Davis played simply out of his mind for a stretch of five games, averaging 67.85 fantasy points between November 11th and November 22nd. Now that James is back, Davis is back to being an elite option on any slate. He has 57 and 58 fantasy points in his last two games, but most encouragingly, is healthy and playing 36 minutes per night. The Blazers rank just 17th in defensive rebound rate this year and give up the seventh-most field goals in the league within five feet of the basket. Considering his past two games and the 56 fantasy points he put up against Portland in their first matchup, that appears to be about what to expect tonight at home.

LeBron James has been all over the place since returning from injury on November 25th. He has had one elite game (64 fantasy points), one average game (42.5), and one terrible game (37) since he took the court again. But this should clearly be a get-right spot for James with an undersized Jerami Grant and or Justise Winslow likely to guard him tonight. The total is also a strong 226 as of Wednesday afternoon and Portland ranks 21st in defensive rating this year. James already dropped 60 fantasy points on Portland once already this year, and for a discount off Davis in the MVP spot on DK, he makes for an excellent choice in any lineup.

With Damian Lillard out of the lineup for the foreseeable future, Anfernee Simons will continue to stand out as a valuable option for a fraction of the salary of big names like Davis and James. When Lillard is off the floor in 2022-2023, Simons’ usage rate is over 30% and he scores more than one fantasy point per minute. In addition, the Lakers (first in pace) are a huge bump up for the Blazers (28th) and the Lakers allow the second-most fantasy points to point guards this season.

Jerami Grant is the other main beneficiary when Lillard does not play, as his usage shoots up to 27% and he has been absolutely crushing over the last three games that the All-Star point guard has been out. In that span, he averages 47.5 fantasy points per game, meaning he still has an opportunity to 5x his salary even at a lofty $8,400 tonight. Grant, of course, gets the same pace bump as the rest of the Blazers and has been on the floor for 39 minutes per game over the last week. He will be needed for at least that many minutes tonight if Portland has any hope of slowing down Lebron.

Hart is the perfect player for these types of Showdown tournaments because he has a very reliable floor (scored less than 20 fantasy points once all season) but can also pop off for 40+ on any given night, just like he did on the 25th against the Knicks. Hart is the rare shooting guard who crashes the glass with reckless abandon, and he has at least six boards in all but two games this year. The Lakers allow almost seven rebounds per game to the position this year, plus Hart isn’t going to have to exert too much defensive energy trying to chase Lonnie Walker around the floor tonight. Hart for $7,800 with a guaranteed 33 minutes tonight is a great play.

Speaking of perfect tournament options, Westbrook is about as boom-or-bust as they come this year, with games ranging between 23 and 40 fantasy points just in the last week. While he may still be struggling with his shot, Westbrook still averages over five rebounds and seven assists per game. His roster percentage may also come down tonight with Patrick Beverley returning from suspension, but Westbrook should get 26+ minutes regardless of what happens with the other point guards on the roster.

Brown should draw the start at small forward for the Lakers tonight, which makes it quite the head-scratcher that his salary is only $3,000 on DK, less than players like Austin Reaves and Thomas Bryant. Brown has played at least 20 minutes per night in every game over the last 12 days, and he has shown 20-fantasy point upside on multiple occasions. He is the very definition of a dart throw tonight, as Brown could just as easily give you eight fantasy points, but the combination of the salary plus time on the court makes it worth the investment.

The Lakers really struggle against opposing big men this year, ranking third in fantasy points per game allowed to opposing centers. That of course is a huge benefit to Jusuf Nurkic who is another great play tonight, but it should also benefit Watford, who will play between 16-22 minutes with most of those coming against the Lakers’ frontcourt backups. Watford’s season-high in fantasy points is 21 this year, but he has also at 10 fantasy points or more for five straight games, so he isn’t going to get you zero. Watford should benefit from providing backup minutes to both Grant and Nurkic tonight, and the pace-up plus lazy Lakers interior defense make him a worthy dart throw.