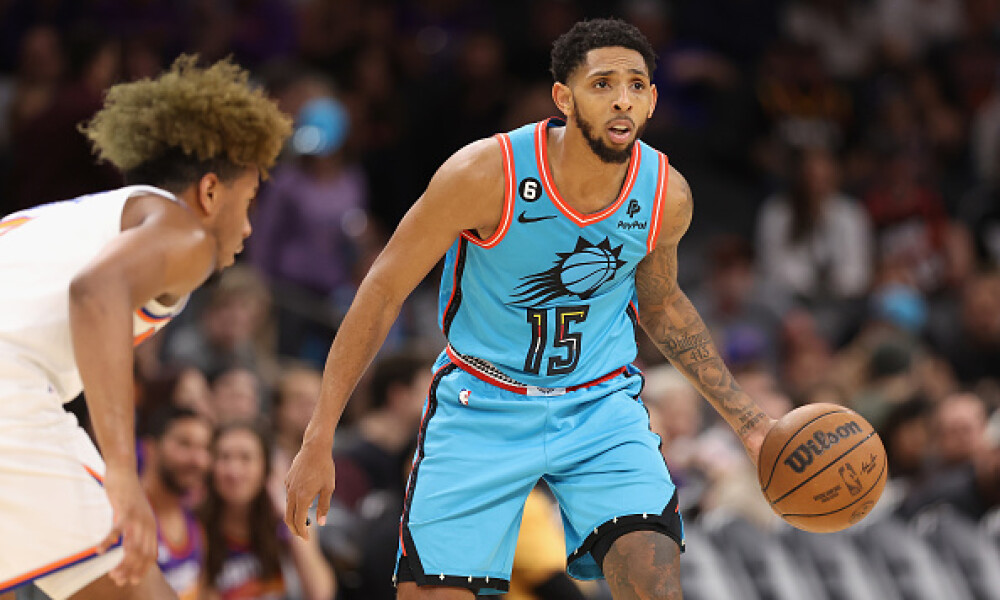 With both LeBron James and Chris Paul sidelined tonight, we are missing a large piece of potential star power in the NBA DFS Showdown Slate. At a high level, the attention essentially shifts towards some combination of Devin Booker and Anthony Davis, but there are multiple ways in which you can build your lineups. As the Lakers travel to Phoenix to take on the Suns, let us take a look at who we are targeting for our NBA DFS Showdown Slate lineups. With Los Angeles coming in as 10-point underdogs, it remains to be seen how competitive of a game we truly have tonight.

Booker gets the nod here as he has the slightly better matchup from a statistical perspective while also coming in about $2k cheaper on DK than Davis. There has to be some concern about a reduced workload for Booker as the Suns are favored by 10 points this evening, but he is also talented enough (especially without Paul in the lineup) to do his damage before the game gets out of hand. With no Paul in the lineup, Booker will be busier in the backcourt from all perspectives. Before picking up just three assists against the Knicks on Sunday, Booker had 19 assists in his two previous games and he is averaging 27.6 points, 5.9 assists, and 4.8 rebounds per game to begin the season.

All things considered, the price on Davis is pretty reasonable here with James still sidelined and also based on what the former has been doing in his absence. In a quest to regain some measure of respectability, the Lakers are currently working on a three-game winning streak and 35 points and 17 rebounds per game in that stretch, it is hard not to give Davis a large part of the credit as he has broken the 60 DK point mark in all three games. At 25.6 points and 12 rebounds per game this season, this is some of the best basketball we have seen out of Davis. He is more than living up to the task of leading billing on the Lakers, and if Los Angeles is going to stay competitive in tonight’s game, that is going to be based on what Davis does.

Scoring comes easy to Payne, and when Paul is out of the lineup, that becomes readily apparent. In each of his last six games, Payne has played at least 30 minutes while going over 20 points in four of those games. Payne is also averaging seven assists per game in his last three while also grabbing a few rebounds.

Westbrook continues to be a force off the bench for the Lakers, and the good news is that there not appear to be any lingering issues with the thumb injury he suffered on Sunday. He appears to have found a new life as the sixth man for the Lakers, and Westbrook is looking for his fifth straight double-double as he is averaging 13.8 points and 11.3 assists through his last four games.

For as good as Davis has been on the offensive end, opposing centers have had success against the Lakers this season, and that puts Ayton in a favorable situation tonight. The center is just three rebounds shy of four straight double-doubles, and at 14.6 points and 8.1 rebounds per game this year, he is as reliable as they come.

While nothing about Craig may be exciting or dynamic, he has stepped into a dependable role for the Suns with Cameron Johnson, and now Paul, sidelined. In his last four games, Craig is averaging around 14 points per game with just under eight rebounds per game, and you could argue that his price has not caught up to his recent volume and level of play.

From an offensive perspective, things are pretty predictable from Walker as he is generally going to hit double figures offensively while playing around 30 minutes per night. The issue though is the fact that Walker does little else other than score. With that being said, if he did more, his cost would reflect that, but the groundwork is there for him to surpass the 16.4 points he is averaging per game.

With Paul out, Bridges moves up in the offensive pecking order for the Suns, he has bumped up his performance as of late as well. Of course, we would like it better if Bridges scored at a more consistent level, but we do have a solid base to work with as he is averaging 15.8 points, 5.5 rebounds, and 3.8 assists per game overall. In two of his last five games, we have seen a little more ceiling than we were previously accustomed to out of Bridges as he broke the 50 DK point mark, but the price is not too bad here either.

We saw Schroder get up to 23 minutes on Sunday, partly because Westbook left early with a thumb injury, but given the former’s production and the other options around him, I would expect to see something similar again tonight. Based on his skill set, it should not have been surprising to see Schroder score 13 points along with two rebounds and two assists as we know he is capable of at least that.

Lee has seen his workload pick up as of late, and if this game goes in the direction it very well could, that means increased run for Lee. In a similar situation on Sunday, Lee finished with 15 points, four rebounds, and four assists in 23 minutes of action and there is no reason why we cannot expect a repeat tonight.