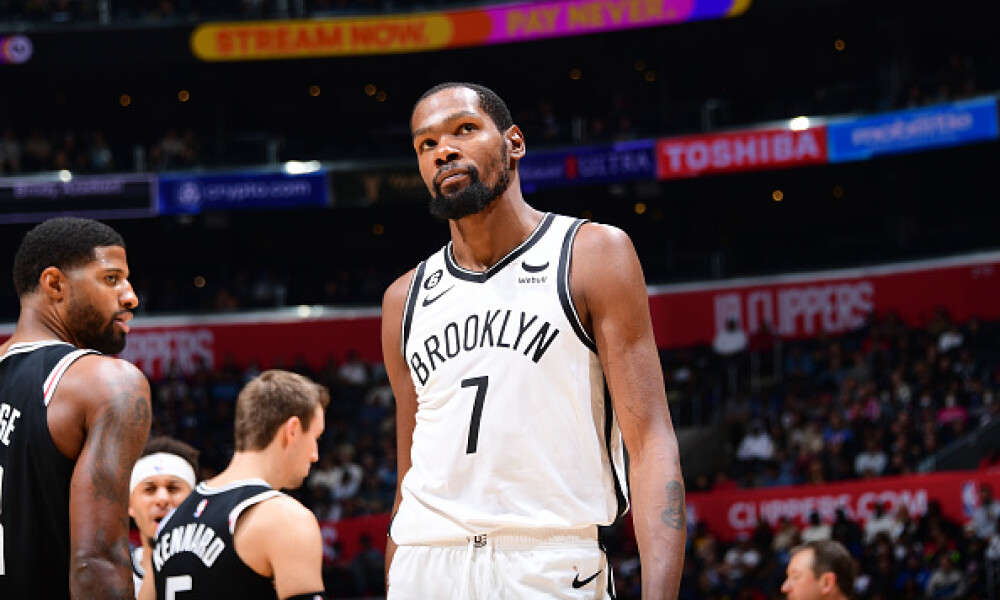 What better way to end your Sunday night than with an NBA DFS showdown slate between the Brooklyn Nets and the Los Angeles Lakers? We have two big-name players out and former teammates LeBron James and Kyrie Irving. But we still have a few big names like Kevin Durant and Anthony Davis on the slate.

Be sure to check out our NBA DFS projections, powered by FanJections, NBA DFS Lineup Generator, and all of the rest of our NBA DFS content and tools! Let's break down Dylans' top plays for the Showdown slate on DraftKings and FanDuel!

Kevin Durant is the best player on this slate and it's obvious by the way he is priced. Durant is $1,500 more than the next closest player Anthony Davis, and rightfully so. The Slim Reaper is still putting up great numbers this season averaging 30/6/5, even with all the drama surrounding this team. It was just two games ago we saw Durant score 72.5 fantasy points with an absurd 29/12/12 triple-double. Durant will be the highest-played captain tonight I'd assume, and if you don't play him it might be hard to cash.

With LeBron James doubtful in this one, you can definitely make the case that Anthony Davis should be in the captain spot tonight. In the Lakers, last game with James out Davis registered 24/14/3/3 for 56.5 fantasy points. The Nets do not have much size outside the likes of KD and Nic Claxton, so in theory, Davis should feast. He could, I'm just not sure he will because he has transformed more into a jump shooter this season, instead of relying on his size. Perhaps, he will tonight.

Say what you want about Russell Westbrook as a basketball player, but all he does is stuff the stats sheet for fantasy purposes. Russ has scored at least 34 fantasy points in his last eight games. If you want to take your lineup completely off the rails and go Westbrook to save money, I do not hate the idea.

Nic Claxton has been very solid for the Brooklyn Nets this season averaging 12/9 and swatting away two blocks per game. He is the only rim protection the Nets have, especially with whatever Ben Simmons is doing. Claxton just needs to stay out of foul trouble. Claxton has scored at least 36 fantasy points in four of his last five games, and there is no reason to believe he will not do that tonight.

Royce O'Neale has been everything the Nets could have wanted and more so far this season. You could make a case that O'Neale is the Nets second-best player. He has done everything they have asked him to do, from guarding the other team's best player, and being the team's best outside shooter, with Seth Curry out. O'Neale has knocked down a career-high 42% from behind the arc. With him averaging 27.3 fantasy points, he should be in your lineup tonight at $7,200.

Walker continues to have a large role on this Lakers team even after a two-game absence. He came back and played 33 minutes scoring 19 points and finishing with 25.75 points. With Lebron out once again tonight, I would expect Walker to be the second scoring option behind Anthony Davis.

Troy Brown is a solid piece of this Lakers wing rotation. He has seen at least 22 minutes off the bench in his last five games. He is coming off his worst game in some time scoring just nine fantasy points. I expect him to have a bounceback game, and he should score close to 20 fantasy points once again. At $4,400 you will take that.

With LeBron James injured Wenyen Gabriel got the start. But he only played 19 minutes. The Lakers went small for the most part which lead to Austin Reeves playing 33 minutes off the bench. Reeves took full advantage of that run scoring 19 points and corralled five rebounds and scored 27.5 fantasy points. If the Lakers play small once again, against a small Nets team, Reves could have another solid game.

Edmond Sumner continues to start at point guard for the suspended Kyrie Irving. He is getting around only 20 minutes though, but he is making every minute out on the court count. Over his last two games Sumner has scored 26, and 31 fantasy points. At his price of $4,000, I am getting him in my lineups.