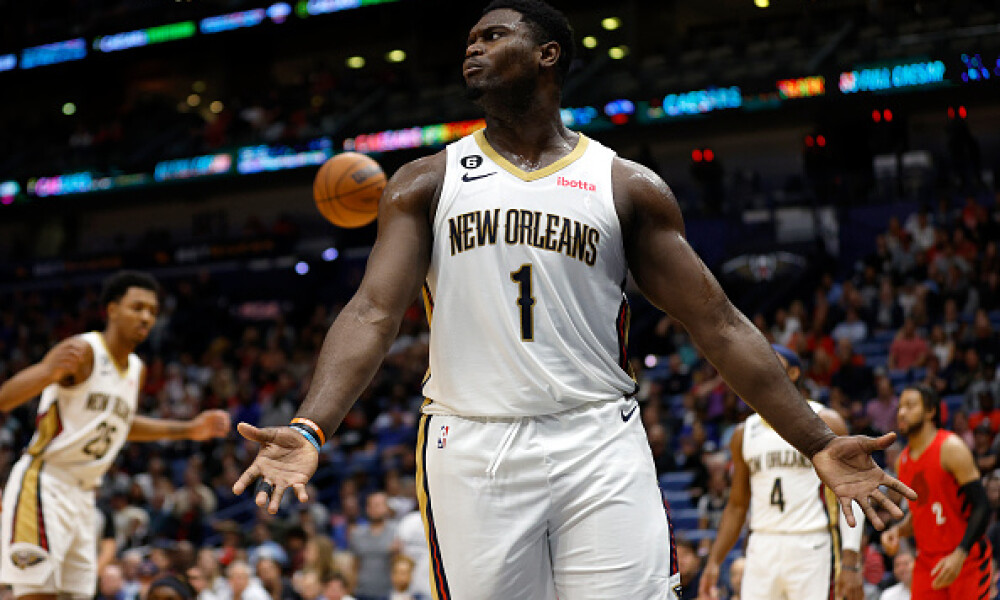 Tonight’s Showdown Slate with the Rockets versus the Pelicans may be about how many New Orleans players you can fit in your lineups. The New Orleans Pelicans get a nice bump up in pace and the Rockets are 29th in defensive rating this year. Here are the NBA DFS top plays we can invest in for our lineups on FanDuel and DraftKings!

Considering the matchup and pace of this game, I am having a hard time finding anyone but New Orleans players in my MVP slot. I will try to differentiate evenly between the three of them, but there are three mega-productive fantasy players in positions where the Rockets’ defense really struggles. That starts with Zion Williamson who has been a little up and down this season, but has more than 40 fantasy points in three of his last four. Where Zion has been lacking in his box scores, the Rockets have been very generous. Zion has one game above seven rebounds in November, but Houston allows the fifth-most rebounds to the position and is 23rd in the NBA in defensive rebound rate.

There are teams that are bad against shooting guards, and then there’s the Houston Rockets. Houston’s 47.31 fantasy points allowed to the position are two more than any other team this year, and they allow 24 points, six rebounds, five assists, and three three-pointers per game to the position. Ingram struggled in his last game against the Trail Blazers on Thursday, but he has been very productive since returning from injury. He has at least 38 fantasy points in four of his last five games and has recently rediscovered his shooting stroke. He is above 50% shooting his last three games.

McCollum knocked off the rust of a couple of bad games on Thursday against Portland in a revenge game. He poured in 38 fantasy points in 38 minutes, but it’s the minutes that impress me most for tonight. The Rockets now have passed Detroit for the worst team against point guards, and if McCollum can get 38 minutes against this squad with a big bump in pace, he can easily outscore his superstar teammates, plus he is the cheapest of the three. McCollum at almost $1,000 less than Zion allows you to get other high-priced players in your lineup tonight.

The best thing we can say about Porter’s fantasy production lately is that the Rockets have been surprisingly competitive in almost every game. They’re still losing them, but it’s allowing Porter to play a full allotment of minutes. He is over 34 minutes in every game except one this season, which has allowed his fantasy points to creep close to 40 per night. Even in a terrible shooting night on Wednesday (36% from the field, 16% from three), Porter finished with 31 fantasy points thanks to his contributions in rebounds and assists.

In a vacuum, I think I would take Sengun over Porter tonight if I’m forced to make the choice. He is $800 cheaper, he has been more consistent over his last four games (never less than 33 fantasy points), and the Pelicans are just middle of the pack against opposing centers. Unlike Porter, Sengun has discovered his shooting stroke lately, hitting more than 60% of his shots in three of his last four, plus averaging almost 10 rebounds per game in that span. Jonas Valanciunas will have a hard time guarding Sengun on the perimeter tonight, so I’m expecting big things out of the Turkish center.

For pure high ceiling tonight, Green might be the best option on the Rockets. We just saw it against Orlando on Monday, when he put up 49 fantasy points in 38 minutes and contributed in assists, rebounds, steals, and blocks. The Pelicans are a top-five team against shooting guards and Ingram will be a pesky thorn in Green’s side. But he is cheaper than his Rockets’ teammates and will have no feat shooting the ball in what should be a high-scoring game (230.5 total, highest on the slate).

With Bruno Fernando hurt and Christian Wood out of town, it’s Usman Garuba who has been getting the backup center minutes to Sengun. The Rockets still don’t want to push the 20-year-old Sengun more than about 30 minutes per night, so Garuba has been on the floor between 12 and 25 minutes the last four games, averaging 18 fantasy points per game in that stretch. We can count on Garuba for about eight points, six or seven rebounds, and he has at least two steals or blocks in three of his last four.

We have already seen how the Rockets recently passed the Pistons for the worst team in the league against point guards. Alvarado has clearly passed Devonte Graham as the backup to McCollum and has only played less than 14 minutes in a game once this season. With the fast-paced matchup and a reasonable probably that this game is a blowout, I like Alvarado as a way to fit in more high-priced Pelicans. He is putting up over 15 fantasy points per game this year.