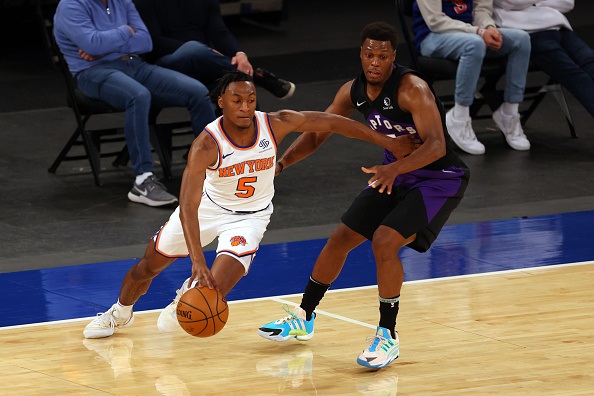 I’m not sure where the Knicks would have been in Game One without the 27 points he scored to keep New York in the game while Julius Randle struggled. Those struggles were contagious as Burks also had to make up for RJ Barrett and Reggie Bullock ’s shooting woes, and even if all three do turn it around tonight, he will still be heavily involved tonight. With Elfrid Payton being dreadful and slated to lose even more time from the eight minutes he played on Sunday, it wouldn’t surprise me to see Burks running the point a little more as well. It’s hard to ignore

Between Favors’ price on DK and his Game One performance, I’m not sure what jumps off the page more. In 22 minutes, Favors scored 12 points and grabbed 11 rebounds while also blocking four shots. There is the danger in chasing that performance, especially the blocks, but at this price the risk is minimal and the potential for another double-double is real.

On a short slate, we have to go hunting value, and playing time is often a fine place to start. We have that part covered as O’Neale played 36 minutes to kick off the playoffs against Memphis. The problem is that he only scored three points and grabbed five rebounds in that time which was below his season averages of 6.9 points and 6.8 rebounds. We have seen more out of O’Neale and with the playing time there, he could be a good source of salary cap relief.

I didn’t copy this from over the weekend, but Green did exactly what we needed out of him as a value option. In 31 minutes of play the swingman scored 11 points to go along with two rebounds, assists, and steals. Nothing about that line stands out, but 24 FD points at this price point certainly works for our lineups.

Bertans is priced accordingly for the risk he brings, but it’s hard to argue with the 14 points he scored in 27 minutes of play in Game One. Washington will likely be playing catch-up again so Bertans will be shooting early and often, and if the shot is falling, the value will be there.

Washington will have to score in order to keep pace with Philadelphia, and Hachimura does have the ability to do so. With 12 points in 36 minutes of action in Game One, that ability wasn’t exactly on display, but he did add five rebounds and one or two additional field goals makes his day look a whole lot different. The good thing, is that we don’t have to worry about his role.

The playoff stage didn’t seem to be too bright for Quickley who scored 10 points in 21 minutes of play while handing out three assists and grabbing two rebounds. With Payton likely out of the rotation, the Knicks will roll with the hot hand, and that very well could be Quickley if the shot continues to fall.