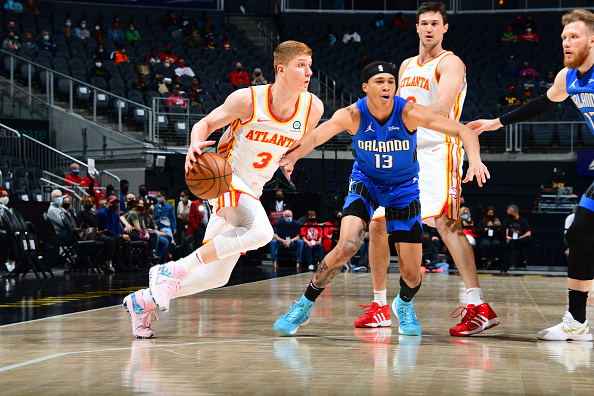 I’m not sure we can count on Gibson to play much more than his standard 20 or so minutes, but it wouldn’t surprise me to see that total creep up slightly against Atlanta. New York will have to work to counter Clint Capela on the boards, and Gibson likely gives them the best chance at doing so. There isn’t going to be much game planned for Gibson offensively but he usually finds his way into a few buckets while most importantly being active on the boards.

Huerter has had more than a week off to ensure his ankle is healthy and to get back to his 25 to 30 minutes of playing time per night. Towards the end of the regular season his offensive production was down compared to his levels earlier in the season, but he did score 14 points and grab six rebounds in 26 minutes of play in his last regular season game. The Knicks are a tough defensive opponent, but Huerter will get his shots and he should have a relatively clear path to at least 25 fantasy points.

Green might not be the most exciting option, but in the playoffs (when everyone is pretty much healthy, or at least actually plays) we have to look at value options a little differently. We can expect to see Green play around 30 minutes most nights and he is the type of player who becomes more valuable in the postseason and he has the experience to go with it. Green does a little bit of everything which is a plus from a DFS perspective.

Rose is playing like it’s five years ago, and with a week in between the regular season and today’s game he certainly will be well rested for tonight’s game. New York has really come to rely on Rose offensively and it is with good reason as not only has he consistently been strong offensively with 20 points being a realistic expectation, but he should be good for around six or seven assists as well. Rose has also seen his minutes increase at the expense of Elfrid Payton ’s struggles.

While Crowder is averaging 10.1 points per game, there is always the possibility he goes for 20. Of course, we could go the other way as Crowder has had some recent games where the offense was simply non-existent, but we do know that the playing time will be there for the veteran forward.

Allen played 25 minutes against the Warriors on Friday to secure Memphis’ playoff berth, and I would expect a similar workload tonight. He made four of his five three-point attempts while grabbing four rebounds but more importantly picking up four steals for a successful DFS outing. The steals I wouldn’t bank on being repeated, but a similar shooting effort is in his wheelhouse.