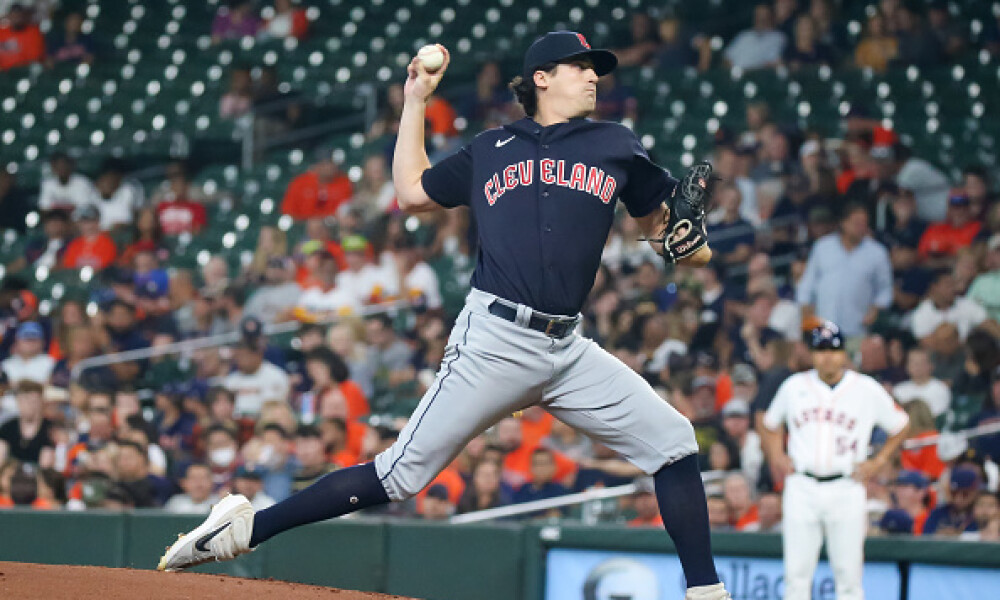 With only a mere half dozen arms that are residing in the upper tier, the pickings are slim, indeed, heading into Week 9’s contests. Take heart that a baker’s dozen hurlers are profiled in the middle group below.

Quantrill has twirled six quality starts (QS) in his last seven appearances, although he has only one win and three losses over that stretch. He also features an attractive 3.52 ERA and 1.19 WHIP through his nine 2022 starts (53.2 IP). This week finds him on the bump, plying his trade in Cleveland against a pair of sub-.500 teams, which bodes well for the 27-year-old righty.

Hudson demonstrated much better control in his last trip to the hill, not issuing a free pass during the course of his seven inning, one run allowed victory over the visiting Padres. His command has been an issue until this latest appearance, as he has handed out nearly as many walks as he has collected Ks this season: 28:24 K/BB ratio. His second start against the Reds at home looks the most promising time to plug him into your fantasy rotation.

Despite seeing his ERA grow over his past couple of outings, it still sits at a superb 1.88, with an accompanying alluring WHIP of 0.86 for Springs. He has given up four solo homers over his last couple of outings, which resulted in all of the runs scored against him. He has picked up the K rate recently, whiffing better than a batter per frame, much more his norm.

Gray racked up 12 Ks during the course of dealing a seven inning QS to the visiting Rays in his last start. He has a pair of road starts coming up this week, but the good news is that both opponents are in the sub-.500 realm entering early June. Do not expect a plethora of Ks, though, as the White Sox and Guardians rank 29th and 30th in strikeouts among all MLB teams.

Quintana may not be seeing the results tally in the victory column, but the fact remains that he has been pitching effectively this season. His 2.32 ERA is certainly useful, although he is just an average K producer (7.3 K/9 through 50.1 IP). Neither matchup is great, as the Tiger ace Tarik Skubal is opposite him to open the scoring period, and then he heads to Atlanta for his end of the week performance.

The veteran southpaw Bumgarner has pitched well this season, and seems a perennial feature in this weekly report whether pitching twice or simply as a streaming option. His ERA sits at 3.31 with a nice 1.20 WHIP accompaniment on the side. He does have a pair of road games, but taking on the Reds is not a daunting task and the Phillies have underperformed this year as well.

Pilkington, the rookie lefty who figures to stick in the Cleveland rotation for the time being with Aaron Civale on the IL with a glute issue, is coming off a 5.0 IP shutout effort against the visiting Royals. He now is lined up for another two home contests against teams that are sitting at under .500, although both have played better on the road than at home this season, so be careful in relying on the 240year-old southpaw totally.

Another left-hander, Snell is coming off a QS where he limited the host Cardinals to just two earned runs on two hits (and three walks). Snell has two home tilts on the schedule in Week 9, and his recent history suggests that is a factor in his favor. He is striking out plenty of opposing hitters, but needs to harness his control to find better effectiveness on the hill.

Kopech was coming off a streak of three consecutive QS when the Jays roughed him up for five earned over just 3.0 IP. He will look to rediscover his mojo at home for two games this coming week, although the first matchup against the Dodgers is not full of promise. His second start of the week against the visiting Rangers glistens just a tad more brightly on the positivity scale.

Whitlock did not record a K in his latest outing, but has been striking out a batter per inning on average. He also sports a tasty 3.02 ERA and 1.10 WHIP through his 44.2 IP on the season. Two road contests are not an impediment for the road warrior second year righty.

Stripling is set to join the Jay rotation with the injury sidelining Hyun Jin Ryu (forearm), and was a hit and miss spot starter for Toronto earlier this season. Taking on two of the non-dominant teams in the AL Central is a positive, but that is tempered by being on the road for both contests.

Irvin is also pitching on the road for both his Week 9 trips to toe the rubber for the A’s, and he has been decidedly better when pitching at home this season, following a recent trend. His peripherals hint at some negative regression in his future (4.13 FIP, .278 BABIP, 82% LOB), so maybe this is not the week to employ him as part of your fantasy rotation.

Greene garners interest due to his K production, with 64 Ks over his 48.0 IP looking awfully tempting. The 6.19 ERA and 15 dingers allowed? Pshaw. But in truth, unless you really need the strikeouts, he is not a pitcher to rely upon even when he has two trips to the mound on his dance card.

As is the usual situation, plenty of two-start SPs that truly are not worthy of a place in your fantasy rotation unless you play in a large league, or one with extremely deep rosters. A couple of these pitchers could be worth a shot as a streaming option, such as those hurlers who will be taking on the Orioles or the Nationals at home, as those two teams are not faring well away from their home parks at all. Other than those couple of games, though, you are better served to simply avoid being tempted to use one of these potential ratio destroyers.

Locating a positive aspect to the 2022 Cincinnati effort has not exactly been a fertile endeavor, but Ashcraft has been a bright spot for the Reds. He carries a stellar 153 ERA and 0.96 WHIP into this contest against the visiting Diamondbacks. His K rate has suffered since he joined the MLB ranks but his MiLB results indicate that may be a temporary struggle. He has two consecutive QS heading into this Week 9 matchup.

Both these arms are worthy of consideration for your rotation mid-week this scoring period. Neither of these SPs are good potentials if you are seeking QS, as they each only have one outing where they pitched through the sixth inning, but the possibility of picking up a win is in the cards. Their impediment to achieving victories has to do with their sub-.500 teams’ ability to pick up wins. Their ratio stats over the past several starts are useful, but if you are seeking Ks, go with the Pittsburgh pitcher as Faedo is a sub-par K producer on the season.

Singer has looked like a different pitcher since being recalled from the minors in mid-May, producing a superb 1.37 ERA and 0.86 WHIP over 19.2 IP, along with a 9.2 K/9 rate in the whiff category. Facing Toronto at home is a plus, too.

Due to injuries suffered by Wade Miley and Drew Smyly, the Cubs will likely turn to Thompson to help fill the rotation for the present time. He has yet to suffer a loss and has collected six victories, four as a starter. He is merely an average K producer (7.5 K/9) but his ratios are outstanding: 1.99 ERA and 1.08 WHIP over 45.1 IP.

Contreras has had limited action as a starter, but has been effective nevertheless, allowing just two earned runs over 10.0 IP, while collecting 8 Ks. Not eyepopping results, but if he can continue to hold opposing offenses off the board, his 1.80 ERA and 1.10 WHIP as a starter can be useful for streaming start use.

Otto has delivered two QS during his last three trips to the hill, and has yielded just four earned tallies over that trio of contests. His ERA and WHIP are still inflated due to a disastrous eight earned run effort against the visiting Red Sox mid-May, but he is working to bring his ratios into appealing status again. This is a good matchup for a road contest, as the White Sox are struggling.

Kuhl has settled in fairly nicely in Denver, although he has seen his K rate fall as his control has improved. He has put together a couple of QS in the last two times he has been called upon to start the contest, and his ratios are attractive: 3.17 ERA and 1.26 WHIP.

The 26-year-old southpaw may not pitch with high velocity, but he is effective at his craft, having a pair of QS to his credit over the past two games he has started. His excellent control helps offset his woeful K production (1.5 BB/9, 4.5 K/9 over his four starts in 2022). Taking on the visiting Rays at home is a positive aspect to this start.

The righthanded picked up a victory by going 5.0 innings in his last appearance, holding the Nationals off the scoreboard while allowing just three hits and two walks (alas, just one K). This is a tougher matchup than would be desired, but the Mets are not a team to fear a road contest this season.

Junis has seen his ERA rise during his last three outings, but it still is below 3.00 (2.68 actually) and his WHIP is superb at 0.97 as well. Granted, this is not the premier matchup, especially with a pitcher who is more of a road warrior than one who relishes home cooking, but his overall pitching prowess makes him worthy of a streaming start.