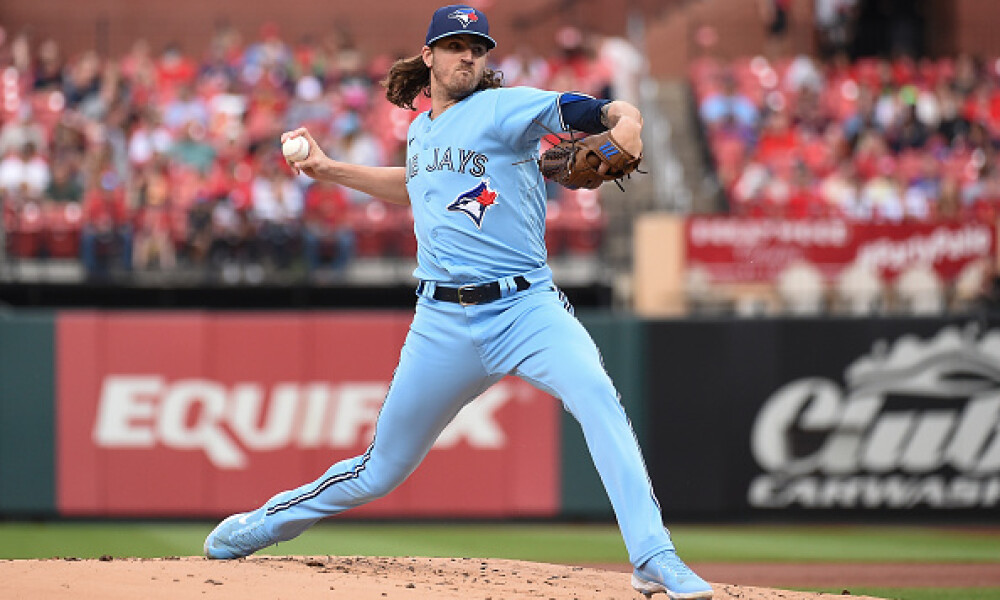 Heading into June, here’s hoping your fantasy baseball roster is graced with one or more of top tier starting pitchers to aid you in your fantasy baseball lineup decisions. Of course, keep an eye on the weather in the host MLB cities this coming scoring period, as this can have an effect on a pitcher’s dual start eligibility, as well as shifting the streaming matchups potentially. This week sees the middle tier packed with potential two-start possibilities to populate your fantasy baseball lineups, and naturally, a boatload of SPs to simply avoid in the third group below. Do take advantage of the wealth of arms to choose from that offer a pair of starts, as the streaming options are as limited as they have been early on this year.

Please realize that these articles feature most recent rotation information available when the article is written, but that circumstances do change due to weather conditions, injuries and general craziness with managers. If a pitcher listed here as having two starts ends up with one (or perhaps none) in the upcoming week, apologies but this article is meant to provide analysis, it is up to the manager to set the lineups or rotations. Without further ado, here are this week’s two-start pitchers.

There are some new additions to the top tier this week, notably the Tigers southpaw Tarik Skubal. The 25-year-old has tossed five quality starts as part of his last seven trips to toe the rubber, and is striking out better than a batter per inning with great control. The Brewers’ Lauer and Perez of the Rangers are also new denizens of the upper grouping. Start all these starting pitchers with confidence, realizing noting is guaranteed in life, and certainly not fantasy baseball, but for the most part, these arms are dependable no matter the venue or opponent.

Rasmussen rarely pitches deep enough into contests where he starts, and thus only has one QS on the season, but then again, a 5-1 record with a sub 3.00 ERA (2.68) and a stellar 0.98 WHIP are all adequate recompense for that paucity in the stat line. A 4.10 K/BB ratio adds to his utility as a two-start option in Week 8

Blackburn is taking to the mound for two home starts this coming week, although he is a fine choice for your rotation even if he is on the road the past season plus. He also offers some extraordinarily attractive ratios with a 1.70 ERA and 1.01 WHIP to his credit through his nine starts over 47.2 IP. He is 5-0 on the year, and has been touched for just a single home run to date.

Pitching for the underperforming Reds is a burden that Castillo has to endure, and his first start in the upcoming scoring period is against the surging Red Sox on the road, but the second start at home against Washington holds promise. He might be a dual start option to only consider fully for the late week start, although if you are seeking Ks, his counting stats might be of value despite the venue.

Joe Ryan was placed on the COVID IL list but is expected to return in time to take the ball twice in Week 8. As a distinct road warrior SP, heading to Detroit and then Toronto is not a daunting prospect for the second-year righty. An 8.7 K/9 rate to go along with superb ratios (2.28 ERA, 0.99 WHIP) through his eight starts to day makes him an attractive dual start option, assuming he is recovered from his bout with the virus.

Gallen’s ERA took a hit due to his allowing six earned tallies by the Royals in his last start, but it still sits at a useful 2.22 on the season. Prior to that, he had gone seven consecutive starts without allowing more than two earned runs while striking out nearly a batter per inning. His control is good if not exceptional, resulting in a fine WHIP to offer his owners as well: 0.83. Both matchups this week are not terrible, if not exactly overwhelmingly positive.

Bassitt’s last two outing have seen his ERA inflate by nearly one and half runs, as he allowed 12 earned runs to score over his last 10.2 IP. The good news is that the Nationals are first on the slate for him in Week 8, and he takes them on at home. Heading to LA to visit the Dodgers in his second start is certainly far from ideal, thus he like Castillo above, might be better served as a single start option given the competition on tap at the conclusion of his week.

Fedde has managed to collect three victories in a season where not a lot has gone right for his team, and collected that win against the NL West leading Dodgers. His lack of control hurts his potential as a fantasy asset, although he does offer decent K potential (4.3 BB/9, 8.3 K/9). He has two road games on the schedule, but has been superb away from his home park this season so far.

Gibson was not originally scheduled to pitch twice in Week 8, but his weekend start was pushed back, making him a low-end middle-tier option this week. He recently dropped his ERA below 4.00 (3.94), and also offers decent K production (8.4 K/9 through 48.0 IP). Two home starts improve his viability as a dual start option.

Montgomery is still winless on the 2022 season, despite having three QS to his credit and pitching for the team with the most victories in the MLB. He has a superb 3.30 ERA and 1.06 WHIP, so the ratio stats are attractive, and he is an average K producer. There is nothing tremendously exciting about the Yankee southpaw, but the fact that the Tigers come to visit as the second of his two home starts holds promise that he might notch a win this week.

Junis picked up a victory (his second on the season, against one loss) while notching his first QS of the season, to boot. Aside from a poor outing against the Padres, he has been effective, and sports a useful 2.76 ERA and 0.95 WHIP as his ratios, to go with his excellent control (1.4 BB/9 over six starts). The Ks are less than stellar, sitting at just 24 over 32.2 IP. Two road starts lined up for Week 8, but he has been an effective pitcher away from the confines of his home park, so that is no reason not to use him.

These arms are those you want to avoid plugging into your rotation for their two trips to the bump, unless you do not value your pitching stat lines. There may be occasion to employ one or two of these SPs based on matchup, but in truth, nothing jumps up and begs to be noticed in the scheduled appearances for these 19 hurlers. Nothing to see here, move along.

The Tampa Bay hurler sports excellent ratios currently, and despite being due for some negative regression, his peripherals do not speak of huge adjustments to his excellent stat line: 1.32 ERA and 0.80 WHIP through 27.1 IP.

The Oakland southpaw does not have a tremendous matchup in this contest, taking on the Astros with Verlander opposing him on the hill. He has tossed three QS over the course of the season, and this is a home start for the 28-year-old. With a below average 5.9 K/9 rate, though, do not expect a ton of Ks to pad your counting stats.

Prior to his last trip to the mound, the veteran lefty had twirled a pair of QS. Even after his short 3.2 IP effort in St. Louis where he was tagged with the loss, he features a 2.43 ERA and 1.18 WHIP, both respectable ratio stats. Heading to the bump in Dodger Stadium is not exactly prime territory for a return to dominance, but he is an experience hurler and has not yielded more than three earned tallies in any of his eight starts to date.

Lyles takes on the visiting Mariners at home, where his results so far in 2022 have been stellar: 2.19 ERA with nary a dinger allowed to opposing hitters. He has tempered what was a problem last season, when he allowed a whopping 38 round trippers, nearly two per every nine innings pitched (1.90 HR/9). He produces Ks at a good clip and the opponent is 10th best in the MLB in swinging and missing thus far in 2022.

With a rainout on Friday at home against the Guardians, Faedo’s scheduled start got pushed back a day. He has been effective in limiting offenses to score against him, and he faces a division rival at home in this matchup, in an afternoon getaway game. Despite a hint toward negative regression in his peripherals, the sample size is small. A more telling showing will come in his Saturday start at home against Cleveland, and if that goes well, this is a fine time to stream him.

In his limited action since being activated, the veteran righty has been mowing down hitters effectively, striking out a batter per frame, and carries an unblemished 0.00 ERA into his third start this weekend before taking the ball in Tampa later in Week 8’s action. Cueto has been an effective road warrior over his past two plus seasons, so heading out of the Windy City for a game is not reason to avoid him, despite the near certainty that he will not hold opponents scoreless the rest of the season.

Singer has not yielded a run, earned or otherwise, over his last four appearances. He will have a chance to extend that streak before meeting the Astros at home for this game, when he takes on the Twins on the road, so keep an eye on his weekend work. He does offer an attractive 4.50 K/BB ratio through his limited 19.2 IP, to accompany his stellar 1.83 ERA and 0.97 WHIP.

The injury to Max Scherzer resulted in the southpaw’s recall from Triple-A, and he delivered a victory in his first start back in the rotation whilst visiting San Francisco. Here, he gets another West Coast start to demonstrate his value to the division leading Mets, although his average K production rate will be tested against the patient Dodger bats.

Seems odd to be promoting a pair of Pirate arms as streaming options, but the 28-year-old hurler has been effective if not unscored upon as his teammate Cueto has been of late, posting a useful 3.62 ERA over his last five starts (27.1 IP). He has also struck out three hitters for every walk he has bestowed upon the opposition, and despite a stellar 9.9 K/9 rate this year, he would benefit from improved control to push his inflated 1.36 WHIP down into a more respectable neighborhood. He does get to face the Diamondbacks at home here, where he has been much more effective this season and last.