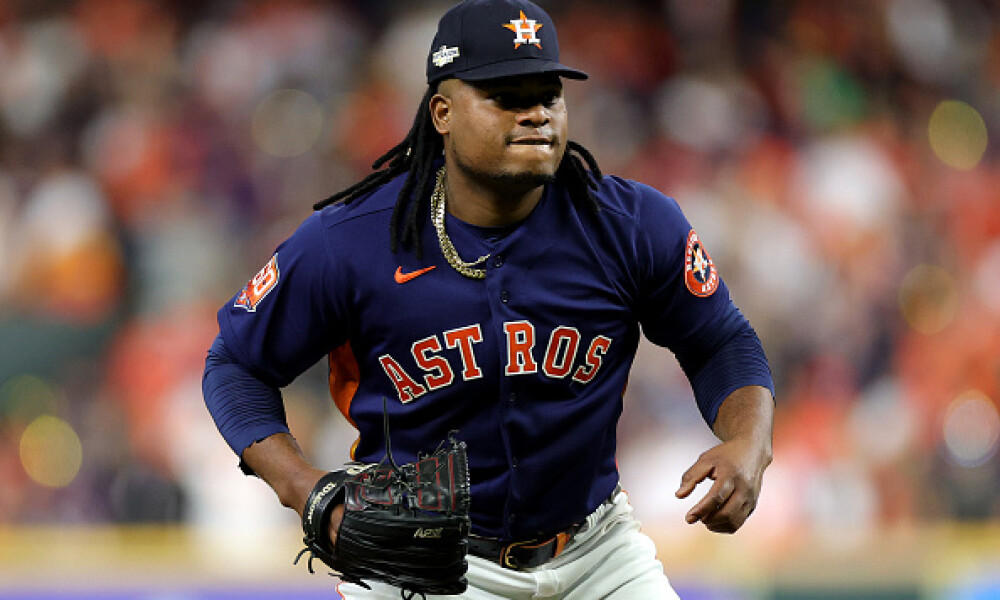 It's Game 2 of the World Series, so let’s break down tonight’s MLB DFS showdown slate for Saturday, October 29th, on DraftKings and FanDuel. The Phillies had a dramatic comeback from 5-0 down to win on a home run in extra innings by J.T. Realmuto. Do the Astros have what it takes to battle back from such a tough loss in Game 1? Let’s break down our favorite MLB DFS Showdown options for tonight’s game.

Don't forget to check out the MLB lineups page before locking in MLB daily fantasy lineups. Plus, use the MLB daily projections, our MLB DFS Optimizer, and the rest of our MLB DFS lineup tools before setting your lineups. Now let's look at our MLB DFS top picks for Saturday, October 29th.

One of the most reliable pitchers in the league from start to finish has been Frambar Valdez and he would probably have gotten more Cy Young consideration if not for his teammate, Justin Verlander, outshining him. Valdez has allowed two earned runs throughout 12.2 innings this postseason, including seven shutout innings against the Yankees.

It’s been a very boom-or-bust postseason for Hoskins, but that could pay off here in the captain spot if we get the boom version. He’s homered four times over his last five games and five times over his previous eight. Hoskins has a .272 ISO and .397 wOBA vs. LHP, both leading the team.

I understand it’s a lefty-lefty match-up here, but Harper is on a different planet. He’s notched three straight multi-hit games and has an 11-game hitting streak during this postseason alone. Over his last ten games, he’s slashing .450/.476/.900 with four home runs, ten RBI, and nine runs scored.

Another Philly heating up as Realmuto notched his second straight multi-hit game in Game 1 of the World Series while hitting the game-winning homer in extra innings. Realmuto has hits in eight of ten games and has homered twice over his last three games. Realmuto has a .191 ISO and .343 wOBA vs. southpaws.

He’s obviously in play to be a captain as well considering how well he’s pitched this postseason. He’s allowed just five earned runs over 25.1 IP over his first four starts. He has back-to-back starts in which he’s struck out eight. He’s allowed three earned runs or fewer in seven consecutive starts dating back to the regular season.

After getting off to a dominant postseason start, he hasn’t homered in six straight games and is still hitting .293 with a .957 OPS over his last ten games. Alvarez has a .338 wOBA and .424 wOBA and you’re more than welcome to use him in your captain slot.

This dude has had an incredible postseason, notching hits in seven of eight postseason games including three home runs, four doubles, five runs batted in, and seven runs scored. What’s not to like out of Pena in the two-hole?

We saw the type of upside Tucker has when he’s on. He homered twice in Game 1 and we saw throughout the year, he can do everything offensively. He hit 33 home runs and stole 25 bases while driving in 112 more runs. He had a .206 ISO and .355 wOBA vs. RHP this year.

It’s been an up-and-down postseason for Bohm, but he had a solid performance last night, in which he helped his team battle back from 5-0 with a two-run double. He’s hit in three of his last five games and has at least one RBI in each of those games. He has a .385 wOBA vs. LHP this year.

There have been few hitters hotter this entire postseason than Yuli Gurriel. He’s hit in seven of eight games and is riding a six-game hitting streak. It was a tough regular season for Gurriel, but all of that is forgotten with how he’s hitting right now.

Don't forget to check out the MLB lineups page before locking in MLB daily fantasy lineups. Plus, use the MLB daily projections, our MLB DFS Optimizer, and the rest of our MLB DFS lineup tools before setting your lineups. Now let's look at our MLB DFS top picks for Saturday, October 29th.