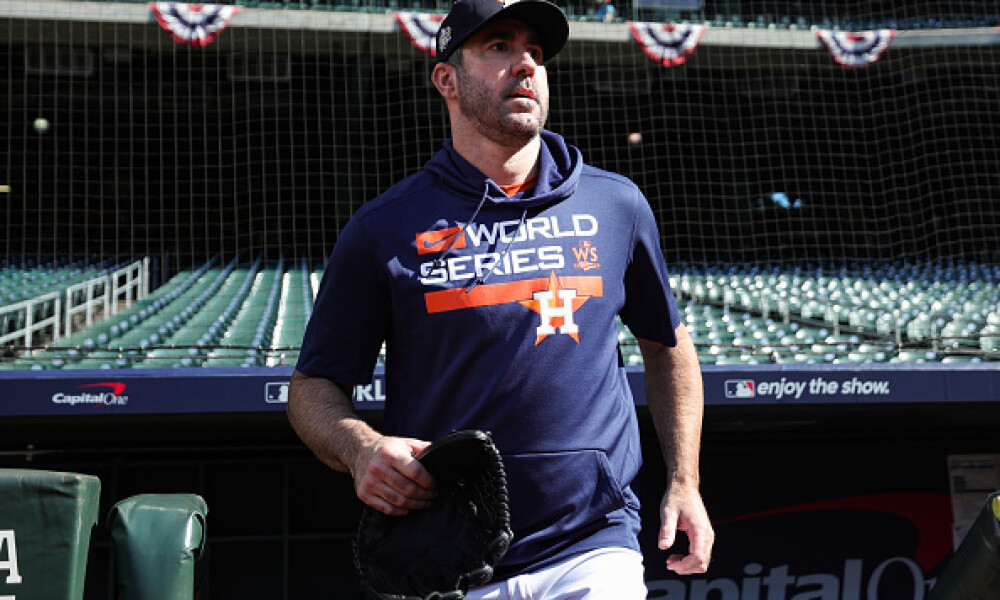 It’s time! The MLB World Series kicks off tonight with Game 1 action! The Phillies will send Aaron Nola to the mound while the Astros will counter with Justin Verlander. This has the look of a pitcher’s duel and, as you can see above, the Astros are pretty big favorites.

Don't forget to check out the MLB lineups page before locking in MLB daily fantasy lineups. Plus, use the MLB daily projections, our MLB DFS Optimizer, and the rest of our MLB DFS lineup tools before setting your lineups. Now let's look at our MLB DFS top picks for Friday, October 28.

JV is the chalk play at MVP, but Nola has a good case himself too. He had a 3.24 ERA on the year with a 0.97 WHIP and 253 strikeouts across 222.1 innings. He was slightly better on the road with a 3.17 ERA, compared to 3.32 at home. He faced the Astros once this year and was dominant, firing 6.2 shutout innings with nine strikeouts in a win, finishing with 35.8 dk points.

Gurriel has been performing very well, slashing .333/.350/.487 over his last 10 games with two home runs and a stolen base. He was slightly better at home this season and his price tag is extremely cheap.

Maldonado is starting behind the dish for Game 1 and he is a nice punt play at a super cheap price (cheapest starter in the game tonight). He had 15 home runs this season, so there is a bit of upside with him (albeit not much).

Schwarber is who he is, a bad hitter who hits bombs. He had 47 dingers this season and he has three over his last 10 games (despite hitting just .226 in that span). I would NOT have him in my lineup tonight if entering just one lineup, but he is worth having exposure to in multi-entry.

Castellanos is one of the only Phillies who was better on the road this season than at home as he slashed .269/.309/.383 away from Philly, compared to .251/.295/.382 at home. I don’t see him having super high ownership tonight and his price tag isn’t too shabby,

Segura is the only player with a solid amount of BvP data today and he is a solid 4-14 (.286) with a home run against Verlander in his career. He provides a little pop and a little speed upside at a cheap price.