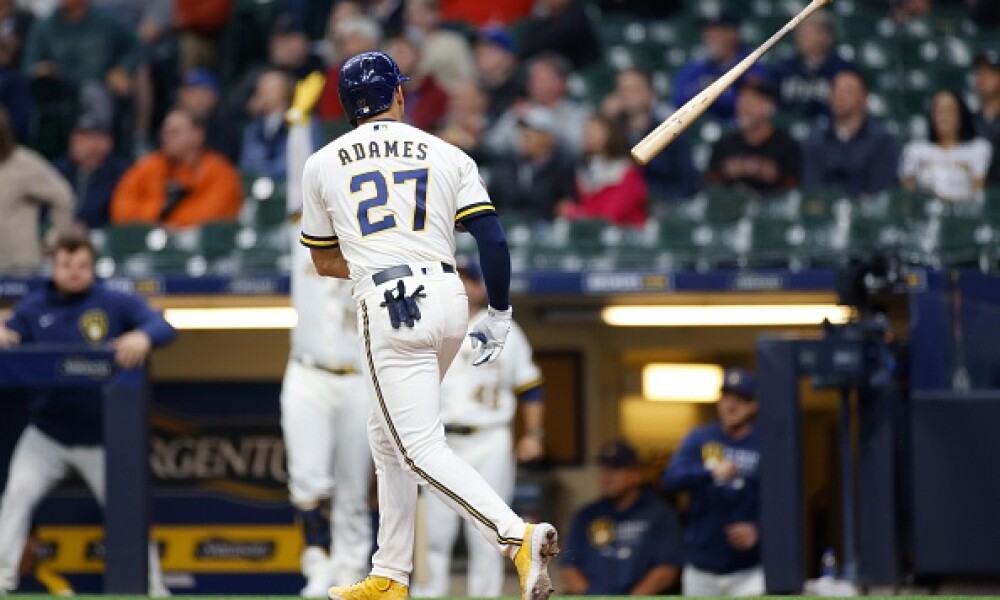 We often see a change of scenery giving a boost to a player. Sometimes, things don't work out with a team and moving to a new organization can often unlock success.

On the road, Adames had a line of .293/.366/.497 with 27 home runs. Adames had mentioned how he had trouble seeing the ball in Tampa Bay and the stats reflect it could be true. Adames still has some flaws. The strikeout rate has increased the last two seasons. Adames has become more aggressive and making less contact this season. He is making more hard contact and has a career best barrel percentage.

Adames has hit second in the Milwaukee lineup the last two games. He's in a better hitters park and there's indications he could be better for the Brewers. Adames highlights the players rising in my latest rankings.

Here are some more players moving up:

(Reds): There are a lot of positive things on the Statcast page for Winker. He is hitting .341/.403/.621 with 37 runs, 13 home runs and 29 RBIs in 182 at-bats. While he has a 26.5 HR/FB rate, his career average is 21.4 percent. Winker is hitting the ball hard consistently with a 54.2 percent hard hit rate. The home/road splits are similar. The only blemish is the lack of success against left-handers, but the Reds haven't faced many. He has a .703 OPS and .316 wOBA in 36 at-bats against lefties. It's nothing to be concerned about and it's all about staying healthy.

Mark Canha (A's): Canha was underrated before the season. He has been good at getting on base the last couple of seasons and hit 26 home runs in 2019. He is hitting .251/.385/.462 with 43 runs, 10 home runs, 16 RBIs and seven stolen bases. The seven steals tie a career high and he's in the 73rd percentile in sprint speed. He has been caught stealing once.

Adolis García (Rangers): An obvious one, as he wasn't on the radar before the season. After five home runs and one stolen base in the first month with a 33.8 percent strikeout rate and 4.2 percent walk rate there was doubt whether he would be productive. Garcia improved in May with a 26.1 percent strikeout rate, 5.2 percent walk rate and a .981 OPS. He hit .312 with 17 runs, 11 home runs and 27 RBIs and five stolen bases in 109 at-bats. Garcia is hitting the ball extremely hard and while the strikeouts are high, he has a xBA of .273. Even if Garcia struggles the rest of the way, he will still provide power and some steals.

Kevin Gausman (Giants): I have always liked Gausman and wanted to see him out of Baltimore. It has been real and spectacular watching him pitch in San Francisco. Gausman is 6-0 with a 1.40 ERA, 0.81 WHIP, 30.9 percent strikeout rate and 5.9 percent walk rate. While there's been some luck with a .223 BABIP and 89.5 percent left-on base percentage, the skills are legit. The splitter is a nasty pitch and he has a .282 xERA. It's always wise to shop someone like Gausman to see if someone will overpay. He will see the ERA rise, obviously, but he's for real.

Rich Hill (Rays): I didn't draft Hill anywhere, but added him off the waiver wire when he was dropped after a bad start. He's been great since the first three starts of the season. Hill is 4-2 with a 3.32 ERA, 1.02 WHIP, 26.4 percent strikeout rate and 8.4 percent walk rate. Over his last five starts, Hill has pitched 31.2 innings and allowed 16 hits, three earned runs, walked 11 and struck out 32. We know the deal with Hill. He's 41 years old and injuries have been a concern. He pitched 58.2 innings in 2019 and 38.2 innings last season. If someone offers something good for Hill, take it.

Amed Rosario (Indians): Playing time was the concern for Rosario entering the season. He fell far in drafts and Andres Giminez was going 10 rounds earlier in many drafts. Gimenez is in the minors and Rosario has been playing every day, often hitting second. After an awful April, Rosario was better in May hitting .295 with 12 runs, one home run, 10 RBIs and four stolen bases. He added another steal on Tuesday.