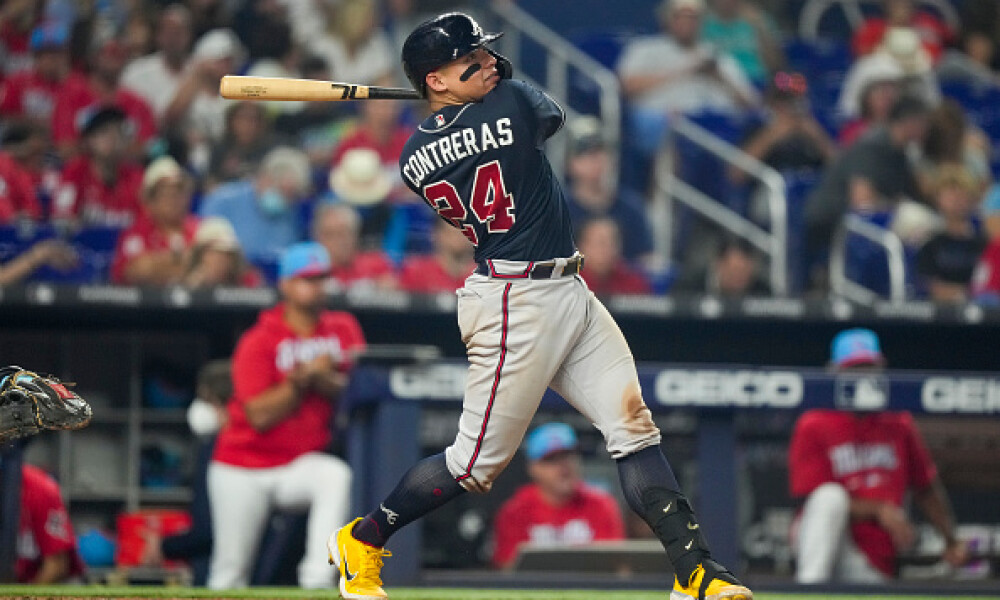 We’re well past the point in the 2022 MLB season of having enough of a sample size. I typically like to get about 40 games in before I start to buy in to certain players either sustaining their hot start or on the other end of the spectrum I’m growing concerned with players that are under performing. I’ve taken advantage of our MLB Season Stats page as well as our Rest of Season Projections. More than any season before I’ve been making use of our MLB Lineups page to see not just who is getting more playing time, but if they’re moving up in the order. All this is to say that I have struggled in some leagues whether it’s from injuries or players who haven’t panned out so far. I’ve been more aggressive with my FAAB bids and waiver wire activity than I can remember.

The catcher position in fantasy baseball is where most managers just try to keep their head above water. I’m even guilty of punting the position during draft season and simply trying to tread water with options on the waiver wire. Earlier this month we looked at Adley Rutschman and more recently we talked about Jonah Heim, Daulton Varsho, and Gary Sánchez. I’ve been mixing and matching those names the last couple weeks and trying to just find whoever was hot at the position to plug into my fantasy baseball lineup just to see what could stick. In arguably my worst league I’ve had William Contreras of the Atlanta Braves since he was recalled about a month ago and while I knew he was hitting the ball well I wasn’t aware how truly excellent his run has been.

Through his first 13 games of the season Contreras had seven home runs, joining the likes of Ronald Acuña Jr., Justin Upton, and Dale Murphy as the only players in Braves history to start a season with seven dingers in 13 games. Following Sunday’s series finale against Miami, Contreras now flaunts a slash line of .281/.369/.702 with a .448 wOBA and 187 wRC+ and he ended up going 2-for-4 with a double and one RBI. Is he likely to regress? Sure, but it’s likely that he can still provide value to your fantasy baseball roster. For starters he’s only 24 years old and looks ready to finally contribute to the Braves for a full season. Additionally, the Braves don’t need to commit to him as their full-time backstop. That’s a luxury when you also have someone like Travis d’Arnaud. Similar to Gary Sánchez’s player spotlight last week, Contreras has been getting reps at DH over the last three weeks and Braves GM, Brian Snitker, even plugged him in at left field last Monday. It’ll take more starts for Contreras to gain additional position eligibility, but Atlanta hasn’t been shy about getting his bat into the lineup even if it takes some creativity.

As of Monday morning Contreras is available in about 20% of ESPN leagues and just over 40% of CBS Sports leagues so even in shallow formats he can be had for nothing off your league’s waiver wire. The Catcher eligibility is a luxury since the position can be a bit of a revolving door if you don’t invest early draft capital. Contreras might be better suited as a DH considering he started the season at Triple-A Gwinnett to improve on his defensive skills. Still he’s in the bottom 20% in framing and he’s no Yadier Molina behind the dish. But take advantage of the Catcher eligibility and reap the power rewards. I’d expect his rostership numbers to spike a little bit ahead of Monday’s scoring period considering the Braves hit the road for seven games this week with four of them being in Coors Field.

There is a bit of an “all or nothing” approach with Contreras. His launch angle is a putrid 3.6 degrees which explains why, despite all the power over the last month, he also has a 53.1% ground ball rate. However, his maximum exit velocity of 113.4mph puts him in the 92nd percentile and he has a 47.2% hard hit rate according to Statcast. If you can get past the first three games against Arizona this week, you’re rewarded handsomely with the Braves getting four in Coors Field. You’ll want his power on your fantasy baseball roster and this week is a big test considering most of his playing time has come at home and Truist Park has played as one of the more hitter-friendly ballparks so far this year.

The Braves have struggled offensively so far. Entering Sunday they were 19th in runs scored and 24th in team batting average despite being 6th in home runs. Matt Olson has struggled in the month of May but the bat has shown signs of life over the last week. Ronald Acuña Jr. has been a little beat up and he only has two home runs and a 34.1% strikeout rate to start the year. Eddie Rosario is on the IL with an eye injury and Adam Duvall has been on a milk carton after hitting 15 home runs and driving in 44 runs over his three-month tenure with Atlanta last year. Injuries and the under-performing offense have led to the Braves falling 8.5 games behind the Mets in the NL East. It would only be beneficial to Atlanta to keep Contreras in the lineup on a full-time basis if they want to make a deep run to defend their World Series championship.