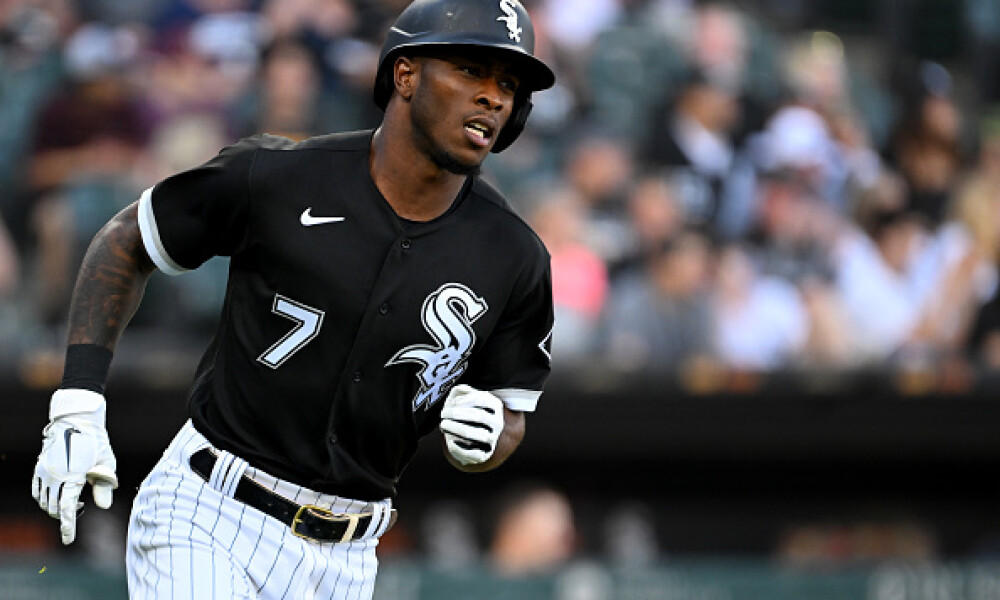 It’s becoming increasingly rare that one player can win you a whole category in fantasy baseball. You might think about Aaron Judge in home runs, Trea Turner in steals, or Josh Hader in saves. But it’s clear once again in 2022 that Tim Anderson is a player who can win you batting average all by himself. Looking back at preseason fantasy baseball rankings and average draft position (ADP), Anderson was taken as the fifth shortstop in drafts, around number 37 overall. It seems we were all too low on Anderson and what he can do in all five rotisserie categories. Anderson is giving us a level of batting average with such a high number of plate appearances his managers may never need to scour the waiver wire for help in that category. Let's take a closer look at the Chicago White Sox shortstop and see if his MLB projections tell us this level of production will hold for the rest of the season.

We have known for four seasons now that Tim Anderson is a batting average savant. His cumulative average since 2019 is a robust .324 He already has one batting title under his belt in 2019 and after another two hits on Thursday, looks poised to battle for another this year. His .346 average is behind only Taylor Ward and Manny Machado among all qualified hitters, as he passed Xander Bogaerts and Eric Hosmer yesterday.

In a year when the average major league batting average is just .235, Anderson is now a full 111 points above that. It’s just his latest showcase of an elite average that places him far and above the rest of the league. 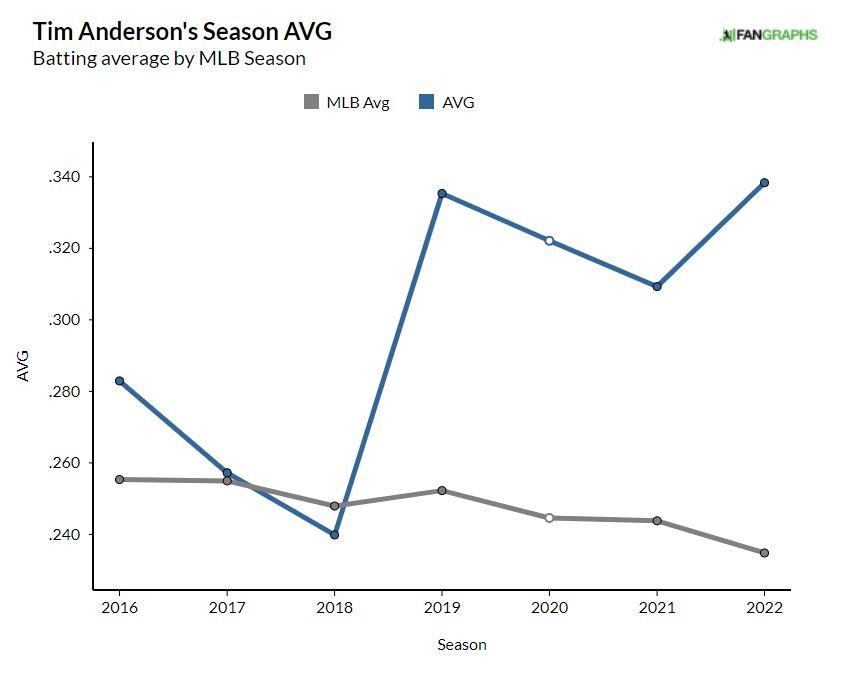 You can see that as the overall league average slowly declines, Anderson’s has peaked and stayed mostly steady over .320 the last four seasons. But while many high-average hitters achieve their success because of a combination of high walks and elite command of the strike zone, Anderson’s walks-be-damned attitude is extremely rare. 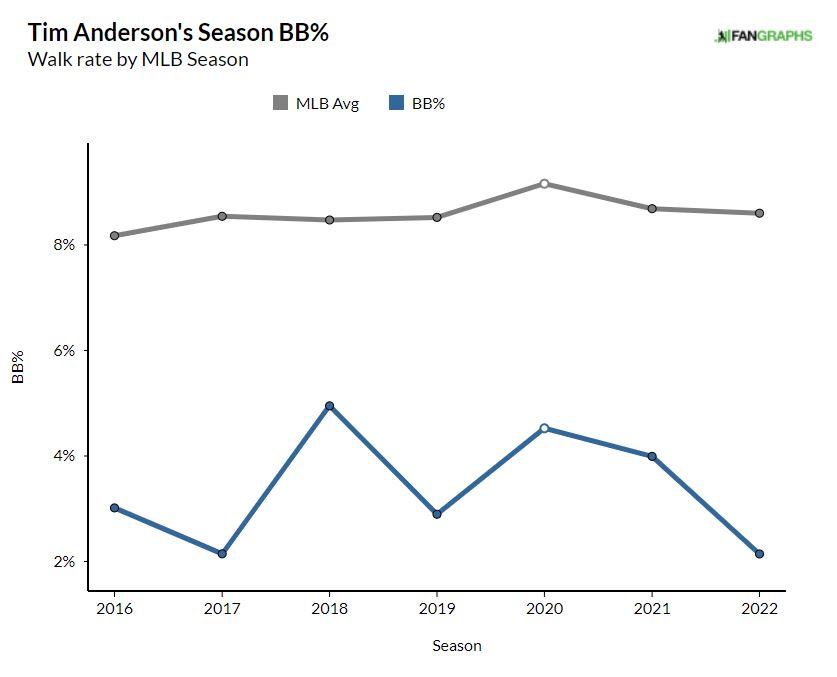 Anderson’s walk rate has always trailed the major league average by a significant margin. This year, that trend is even more magnified than usual. Even though Anderson is top-three in the majors in batting average, he is dead last in walk rate at (2.1%).

To put that in perspective, none of the MLB batters with walk rates double that of Anderson (4.2%) or lower have an average over .272. But Anderson’s batting average (.346) is close to the best in the league.

How does he do it? It’s not just as simple as a strong overall contact rate. In fact, Anderson only ranks 40th among batters in overall contact rate this season after ranking 82nd last year. Where Anderson does his damage is by ensuring he does not make a mistake when he swings at balls in the zone.

He is never lower than 15th among all major league hitters. If a pitcher puts a ball in the zone for Anderson, he is going to swing at it, and he is going to make contact. Anderson’s swinging strike rate of 11.1% this season ranks 82nd which puts him among the elite in the league at avoiding swinging strikes. His called strike percentage of 10.0% is also the seventh-best in baseball this season.

But beyond the league-winning average he brings, the best thing about rostering Anderson is he is not just a one-category stud a la Myles Straw or Joey Gallo. Anderson already has accumulated four homers, five steals, 19 runs, and 13 RBI through mid-May.

He bats at the top of a formidable White Sox lineup, which is going to give him ample opportunities to pile up runs, stolen bases, and RBI. Coming into Friday, only Trea Turner was a better full-time shortstop in rotisserie formats than Anderson this season. Jazz Chisholm is also eligible there depending on your format, but it’s clear Anderson is among the cream of the crop.

The 37th-overall pick in 2022 spring drafts may have seemed like a lot to pay at the time. But now we can look back and say we were all too low on Tim Anderson.