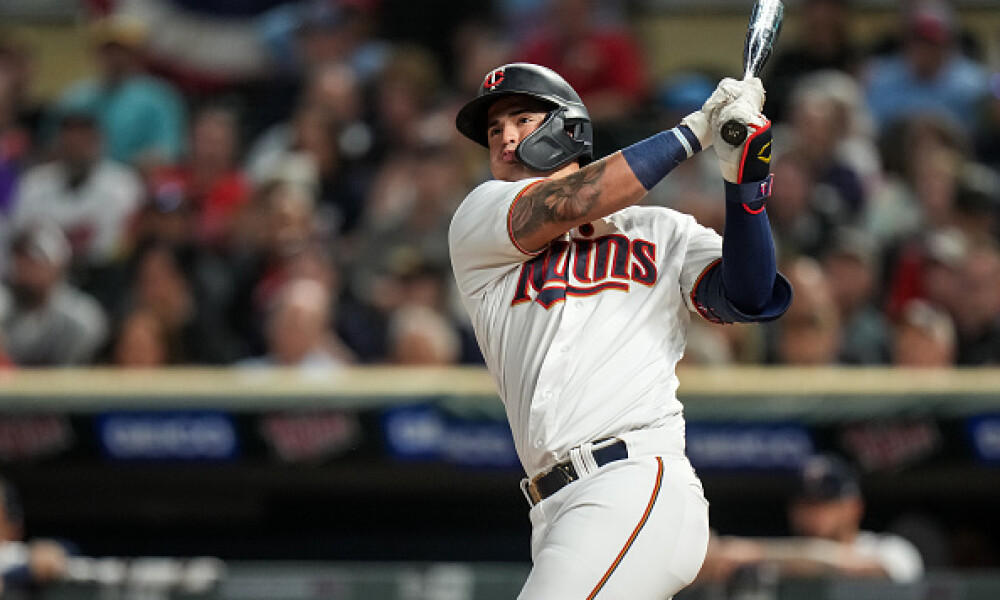 Jose Miranda, the Twins exciting power-hitting rookie, may not even be the most famous person in his family. That honor goes to his cousin, “Hamilton” creator and Broadway heavyweight Lin-Manuel Miranda. He has, though, made a name for himself across the baseball world and has even thrown his hat into the AL Rookie of the Year race. Has Miranda and his offense earned a place on fantasy baseball rosters? These questions come at a perfect time since it’s “Third Base Day” in the Fantasy Baseball Player Spotlight Series. Every Thursday, I break down a different MLB third baseman for your fantasy baseball lineups. Some weeks it is a prospect and others it may be a “Sell High”, “Buy Low” or even totally avoid at all costs-type player. Today I am going to dig into Jose Miranda, the Twins 2021 Minor League Player of the Year and see if he worth a pickup right now in your fantasy baseball leagues or is he more of a wait and see approach.

Jose Miranda was taken with the 73rd overall pick in Lottery Round B of the 2016 MLB Draft.

He was also the third straight high school position player taken by the Twins on the first day of the Draft, as they took high school outfielder Alex Kirilloff with the No. 15 overall pick and high school catcher Ben Rortvedt with the No. 56 overall selection. Outfielder Akil Baddoo was taken right after Miranda with the 74th pick - four players that started in the Twins system that have already had solid MLB experience. Miranda, who wasn't ranked among the top draft prospects by MLBPipeline.com at the time of the draft, was listed as having a really good and aggressive swing with above average defensive skills but “not known for his speed” per Deron Johnson who was the Twins scouting director at the time.

Miranda started the 2021 season with the Double-A Wichita Wind Surge where he was mashing the ball all season long. He had 67 hits, 13 home runs, 38 RBI and a batting average of .345, all league best marks. He got promoted to Triple-A Wichita in mid-June after being named the prospect of the week at first base by MLB.com. Miranda had a 23rd birthday that he will never forget as it was the day of his Triple-A debut, and he went an amazing 5-for-6 at the plate with three home runs as St. Paul Saints beat the Omaha Storm Chasers 15-4. Miranda, who scored four runs, also doubled and singled to give him 15 total bases on the day. By comparison, the Twins' major league record for total bases in a game is 14, set by Kirby Puckett on Aug. 30, 1987, at Milwaukee.

Miranda ended up slashing .343/.397/.563 with 17 home runs in 80 games at Triple-A and appeared to be big league ready after only half of a season at the Twins highest minor league level.

Miranda was promoted to “The Show” in early May of this season and he hasn’t looked back.

The club's third-ranked prospect and the Twins' reigning Minor League Player of the Year (2021) was off to a slow start this season at St. Paul, slashing .256/.295/.422 through his first 95 plate appearances. Advanced scouting, though, saw Miranda as an advanced, pure hitter that was good enough to help the Twins at multiple positions, while they dealt with injuries to Miguel Sanó, Kevin Garlick and left fielder Alex Kirilloff. Miranda has crazy advanced bat control, striking out at a microscopic 12% in the minors and walked even less than he struck out (6.3 percent over 507 games in MILB).

The Twins had no idea what they were getting because after Miranda made his MLB debut on May 2nd, he headed back to St. Paul by the 26th with a .484 OPS following Royce Lewis’ return to the big club. When it was determined that Lewis would need season ending surgery, Miranda was back only a few days later and the rest is history.

In 65 games, since May 30, Miranda owns an .877 OPS while batting .305 and contributing 22 extra-base hits. He’s launched 10 homers and has shown a knack to produce with runners in scoring position, earning a spot as the coveted cleanup hitter.

One last thing- check out Miranda’s advanced metrics compared to some of the best hitters in the game in 2022- not too shabby (courtesy of Fangraphs):

Fantasy Baseball managers are sleeping at the wheel on Miranda. Why is he available in over 50% of ESPN leagues? 35% of Yahoo leagues? Since the All-Star break, the 24-year-old is batting .333/.387.510 with five homers and 21 RBI in 26 games. Over the last 30 days he is the seventh ranked third baseman on Yahoo with a .304 average and 5 HR/20 RBI yet can be plucked off waivers in many leagues? This is a young hitter that already knows how to make adjustments. He can use the whole field and can get the barrel to a lot of different pitches on a lot of different planes. If he’s available Jose Miranda is worth a shot to add to your roster.