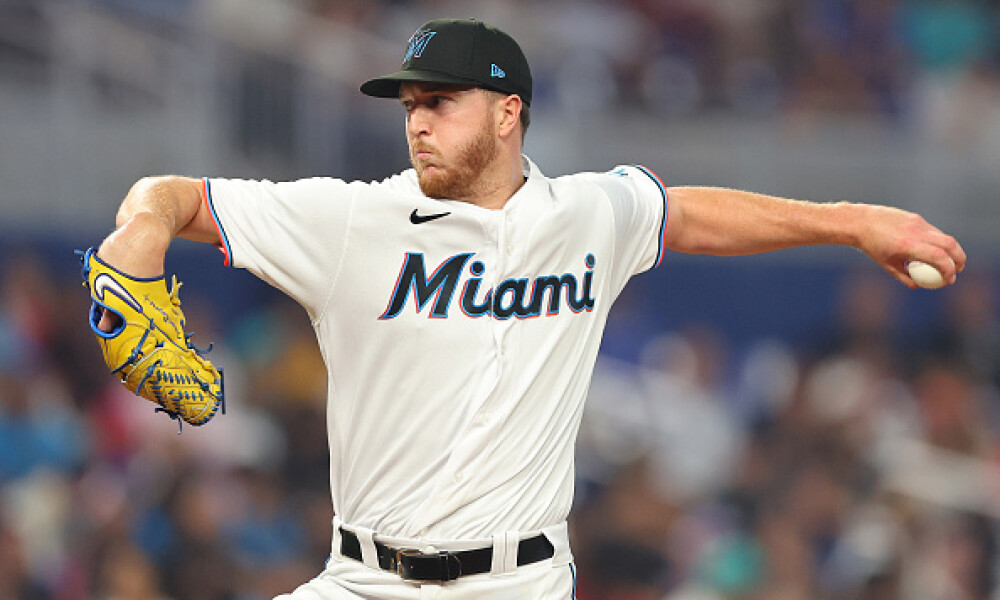 As mentioned above, Rogers has struggled mightily out of the gate this season. His 5.80 ERA and 1.56 WHIP are surely hurting ratios in head-to-head and rotisserie leagues. The 2-5 record through 10 outings and subpar 39 strikeouts over 45 innings don’t help much either. The Miami left-hander has been especially mediocre over his last three outings:

Granted those two of those starts came against the dangerous Atlanta Braves offense and the other was at Coors Field. Still, the results are likely causing fantasy baseball managers to think twice about drafting him this season. Rogers has allowed a combined 13 runs, 17 hits, eight walks, and five homers over his past three starts spanning just 12.2 innings. He's now given up at least five runs in three of his last six appearances as well.

That's a far cry from a guy who had a sub-3.00 ERA a year ago and looked poised to be an NL Cy Young candidate coming into this year.

So what are the reasons behind Rogers’ poor performances so far? Well, the advanced stats and early trends tell us a lot. Just take a look at the differences between his 2021 and 2022 stats in some key areas:

Across the board, Rogers is performing significantly worse than he did last season. Maybe we could find some silver lining in one or two stats being on par with 2021 – but that's really not the case.

His 5.19 FIP and 5.24 xERA suggest Rogers is pitching about as bad as the ERA and WHIP on the surface. Furthermore, his 19.2% strikeout rate is far lower than last year’s 28.5% mark. In turn, Rogers’ 8.9% K-BB rate is notably worse than the 20.2% from his 2021 breakout campaign. The higher batting average against, home run-per-fly ball rate, and barrel rate also show us that opposing hitters are hammering him when they do make contact.

So, Rogers isn’t striking out as many hitters while opposing batters are having more success against him overall when compared to last season. That would definitely help explain his slow start. Why is that the case, though?

A closer look at Rogers’ repertoire of pitches shows some clear signs of worry. He utilizes just three pitches – a four-seam fastball, a changeup, and a slider. When he lacks conviction or success with one of those three pitches, Rogers is simply not as effective.

Rogers is also struggling to command his fastball when compared to last year. Check out his strike zone Statcast data of the fastball in 2021 and 2022 and you’ll see the wider range of pitch locations (courtesy of Baseball Savant).

Since Rogers isn’t locating his fastball as well, it’s allowed opposing hitters to work the count more and hammer the pitch when it does come into the zone. That has resulted in a high 43.3% hard-hit rate and 91.7 average exit velocity allowed with the 94 mph four-seamer in 2022. Rogers has also allowed six homers already on the fastball, compared to just five all of last season.

As for Rogers’ other two pitches, he’s having mixed results with them so far. The slider is actually better than last year. Used 18% of the time, the lefty’s slider has a .240 BAA and 33.3% K rate compared to a .273 BAA and 18% K rate last season. The changeup, however, has declined a bit. The 16.5% K rate with the change is notably less than his 27.9% K rate on the pitch in 2021. Plus, like with the fastball, Rogers is struggling to consistently locate the change this year. Check out his strike zone data for the change from 2021 to 2022.

Notice how Rogers’ changeup is a bit all over the place in the lower part of the zone this season. In 2021, though, he has regularly throwing it in the bottom-right portion to get ahead in counts and use it as a strikeout pitch. That’s not the case as much in 2022. Since he’s unable to put away hitters with the offspeed stuff, Rogers is thus forcing his fastball into more predictable situations when behind in counts. It’s a big reason why he’s struggled with the four-seamer as noted above.

Fantasy baseball managers of Rogers are likely still holding onto the hope of last season’s breakout. It’s worth mentioning that the Miami lefty is only 24 years old and is a former first-round draft pick. The raw talent certainly exists for him to figure things out. We need to see some quick improvements in the short-term, though, to trust him in fantasy baseball lineups moving forward.

Rogers’ lack of success with his three-pitch arsenal is a big worry. If he isn’t getting hitters out with the fastball – which makes up more than half of his total pitches – then the changeup and slider become much less threatening. It could be a long season for a young pitcher that opposing offenses are now figuring out following his breakout 2021 campaign.

For what it's worth, here are some rest-of-season projections for Rogers from ZiPs, FanGraphs, and THE BAT (courtesy of FanGraphs):

You'll notice that ZiPs and FanGraphs projections are a bit more generous than THE BAT. Either way, those numbers would all be improvements on his current stats. Still, they're not nearly at the level we saw Rogers pitching at in 2021.

If you have Rogers on your roster, it may be best to sit and hold until we see a couple of solid outings in a row – then you can cut bait if someone wants him in a trade. However, he showed some late-season struggles last year and it seems that’s carried over into 2022. Rogers compiled a 4.08 ERA in July and then a 3.52 ERA in September last season after missing all of August while on the bereavement list. If, in a month or so, we see Rogers still getting knocked around with an ERA sitting in the 5.00 or higher range – you can probably feel fine about dropping him in favor of a better option on waivers.

Conversely, you can look to buy low in trades and the price tag shouldn’t cost you much considering this slow start. Still, temper expectations because there's a good chance Rogers will continue to struggle all season unless he changes some things drastically. Whether you have him on your team or not, at least you have a better understanding of why Trevor Rogers isn't living up to preseason expectations thus far.