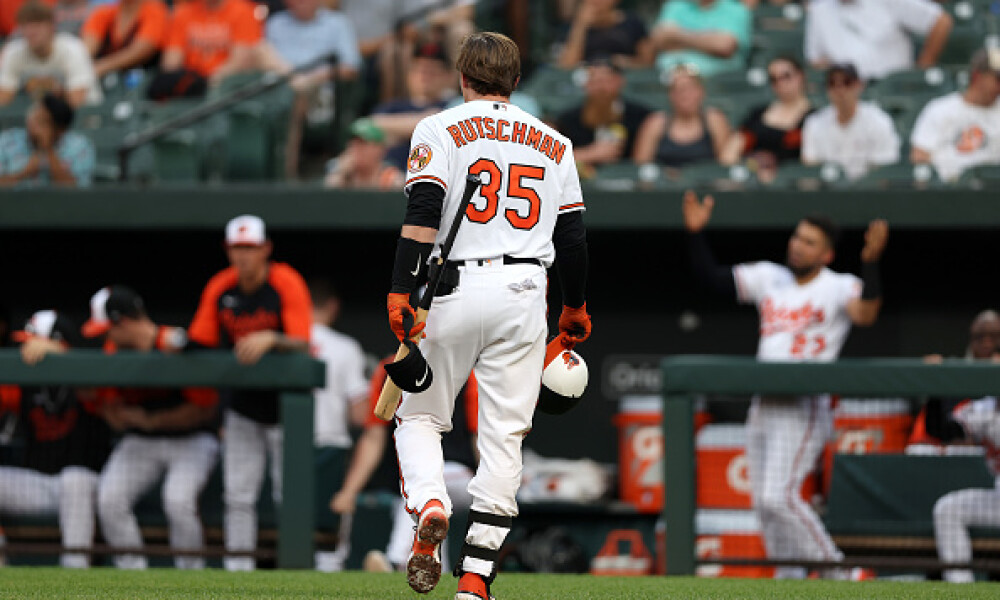 Fantasy baseball can be a cruel witch at times. You can do plenty of work ahead of time with zero payoffs. You could be scouring the fantasy baseball waiver wire, looking for two-start pitchers or streamers, or staying up-to-date on the latest MLB injury report news. You can pay attention to the MLB Lineups as they come in, and even be on the lookout for the updated fantasy baseball rankings as they become available each month. Sometimes all the research in the world just doesn’t quite pay off. This year, like most, is all about drafting well, making the most of trade opportunities, and being proactive on your league’s fantasy baseball waiver wire. The catcher position is no different. You can punt it or commit draft capital toward it. You can be flexible and swap in waiver options with a cavalier attitude, or try to be ahead of the curve and take advantage of a top MLB prospect making his debut. If you have subscribed to the latter, you’ve had to deal with the poor debut of Adley Rutschman. About a month ago, I previewed Rutschman about 2-3 weeks before he was called up to get you ready for the debut. While we were all optimistic about his upside at the time, it hasn’t been the most rewarding of debuts so far. Let's take a closer look at the Baltimore Orioles catcher in the latest MLB Fantasy Baseball Player Spotlight!

It’s no secret that Rutschman has struggled. It’s been about as ugly as you can imagine. But he’s a rookie and patience must be exhibited given the circumstances. He’s been fine defensively as exhibited below:

Gotta love the quick release, but fantasy baseball production doesn’t reward defensive prowess. Should we be so surprised by his struggles on the offensive side of the dish? This appears to happen often with MLB top prospects, as evidenced by the following tweet from an account named “Locked On Orioles” from roughly a week ago:

Following Sunday’s 3-2 loss to the Cleveland Guardians, Rutschman is now slashing just .137/.228/.196 with 15 strikeouts and four walks in just 13 games. That’s ugly, no doubt about it and it easily explains why Rutschman has been dropped in about 12% of leagues. But this tends to happen with rookies. We rarely see players come up and take the league by storm as Mike Trout did as a rookie a decade ago. Keep in mind that we only have a small sample size with Rutschman. He hasn’t even appeared in 10% of a normal MLB season yet.

Still, it’s a bit surprising just how bad Rutschman has been. He tripled in his debut, and I won’t lie, I took an internal victory lap since I started him in a handful of leagues when he was called up. But since then he has just one extra-base hit, zero home runs, and zero RBI. And this is coming on the heels of Rutschman routinely being slotted in the fifth and sixth spots in the lineup. The Orioles do have that kind of luxury though. They’re currently sitting in last place in the AL East with a 23-33 record. With names like Rutschman, Grayson Rodriguez, Gunnar Henderson, Colton Cowser, and DL Hall they can afford to be patient with their prospects and allow them to develop. In Rutschman’s case, they can continue to play him so he gets valuable big league experience despite the struggles. It doesn’t make much sense for them to send Rutschman back down just so he can rake at Triple-A. It’s best if he stays with the big-league club to develop through the struggles.

That’s all fine and dandy, but we’re here to discuss fantasy baseball. If you’re cutting him now you’re doing so at little-to-no cost because you likely added him off the waiver wire for peanuts. It’s not overly promising but according to Statcast, Rutschman does possess a .215 xBA, .279 xWOBA, and a 39.4% hard-hit percentage. Since his debut, he has a wRC+ of just 16. He’s making decent contact, but he’s just not getting on base at the moment. Frustrating? Sure. But it’s the growing pains of a top prospect making adjustments to the big-league level.

At this point, it’s hard to remain patient unless you’re in a dominant position in your league where you can wait this out. But that’s awfully hard to imagine. I’m not opposed to jumping on the Alejandro Kirk bandwagon at the moment. Kirk is riding a bit of a hot streak over the last two weeks. Since May 24th, Kirk has 15 hits, four dingers, four doubles, 15 runs scored, and nine RBI. It’s a little frustrating because he has to share time behind the plate with Danny Jansen and there’s the threat of Gabriel Moreno being called up later in the season. If you’re like me, and you’re the kind of fantasy baseball manager that tries to ride the wave, then Kirk is our current cup of tea. The Blue Jays hit the road this week, but they’ll be taking on Kansas City and Detroit and Kirk should take advantage of these matchups in the upcoming scoring period.

The frustration continues to grow with Rutschman, but most rostership numbers suggest fantasy baseball managers are willing to be patient. Our very own monthly fantasy baseball rankings suggest that he’s still a top ten option at the catcher position. I think it’s more rewarding to be aggressive, but the O’s have some favorable matchups coming up this week. Give him another week or two, but if you’re in a position where you can’t afford such patience then by all means cut ties and get somebody into your lineup that can contribute. If you attempt to wait this out for the elite hitting profile, then more power to you. Fantasy baseball is a fluid game so it’s better to remain flexible rather than firm in your own beliefs on a rookie catcher on a bad team.