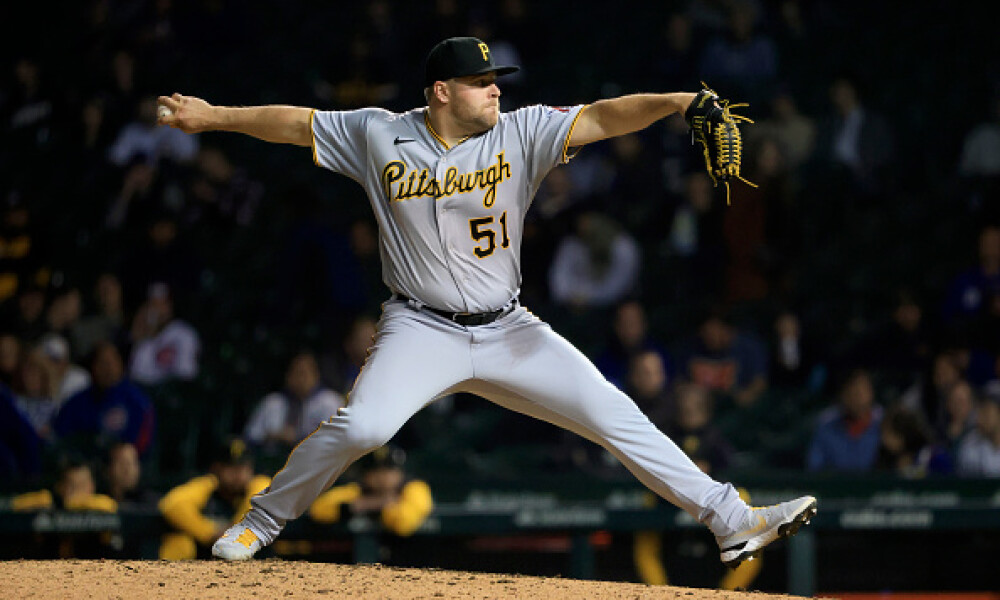 For those fantasy baseball managers who took a shot on David Bednar in drafts, it’s paying off big time to have the Pittsburgh Pirates’ closer on your squad. Bednar is performing like one of the best MLB closers in fantasy baseball and he’s gotten plenty of buzz among Fantasy Alarm writers. Howard Bender mentioned him in a recent Fantasy Baseball Daily Round Up, Justin Fensterman noted his rising value in the latest Fantasy Baseball Stock Watch, and Joe Gallina gave his thoughts in the MLB closer report. Bednar has been one of the elite fantasy baseball closers over the first couple of months of the 2022 MLB season and he’s shot up fantasy baseball rankings. If you’re rostering him, you may be wondering if Bednar is worth selling high on in a trade. On the flip side, you might be considering trading for the closer instead of looking elsewhere on the fantasy baseball waiver wire. Let’s take a closer look at Bednar for the latest MLB Player Spotlight and reset some rest-of-season fantasy baseball expectations for the Pittsburgh reliever.

During fantasy baseball draft season, Bednar had an NFBC average draft position (ADP) of 208.7 – making him a 13th-round pick in 15-team leagues and 17th-rounder in 12-team setups. It’s safe to say he’s exceeded expectations thus far with his 0.87 ERA, 0.63 WHIP, and eight saves as of Saturday. If you’re not familiar with Bednar, here’s a quick introduction.

The 27-year-old was drafted by the San Diego Padres in the 35th round with the 1,044th overall selection of the 2016 MLB draft out of Lafayette College. He toiled in the lower levels of the Padres’ farm system for a few years until getting a September call-up to the bigs in 2019. In the COVID-impacted 2020 season, Bednar only made four appearances out of the bullpen for San Diego and struggled to a 7.11 ERA over 6.1 innings of work.

Before the 2021 season, Bednar was traded to the Pirates as a part of a three-team deal that sent Joe Musgrove to the Padres. In his first season with Pittsburgh last year, the right-hander made the major-league club out of Spring Training and showed flashes of talent. Bednar finished with an impressive 2.23 ERA, 0.97 WHIP, and 77 strikeouts over 60.2 innings. He had 13 holds in a setup role and even totaled three saves with some ninth-inning opportunities after the Pirates traded away closer Richard Rodríguez mid-season.

Coming into the 2022 campaign, Pittsburgh planned to use a closer-by-committee with Bednar and Chris Stratton as the two top choices for save chances. Well, it’s safe to say that Bednar has outperformed his bullpen mate and the closer job looks to be his to lose. Through 16 appearances and 20 innings, Bednar has racked up eight saves and four holds with a 0.87 ERA, 0.63 WHIP, and a 28:3 K:BB ratio. Stratton, meanwhile, has a 5.02 ERA and 1.67 WHIP with just as many blown saves as converted saves (2).

It’s not surprising, then, to see Bednar take over the ninth-inning role from Stratton in the past couple of weeks. A two-inning, 28-pitch save earlier this week was even more telling that Pittsburgh wants to use Bednar as much as possible in the high-leverage spots – especially since Stratton didn’t even enter that game.

Let’s take a deeper dive into Bednar’s advanced pitching stats and metrics. On the surface, his ERA and WHIP are fantastic and impossible to ignore. Those marks are very valuable for fantasy baseball by helping your ratios out even if he wasn’t getting saves. The .132 opponents’ batting average is also a very good sign that Bednar has carried over some of last year’s success when he posted a .184 batting average against. Even the 2.14 FIP and 2.28 expected ERA are good indicators.

However, there are a couple of glaring signs of negative regression possibly coming for Bednar. The righty currently has a .179 BABIP and 100% left-on-base rate. Both of those numbers are nearly impossible to maintain for an entire season. Last year, Bednar had a .259 BABIP and 84.9% LOB rate. Even the simple adjustment from this season’s BABIP and LOB% to last year’s levels should make both Bednar’s ERA and WHIP increase slightly higher than the current elite status.

Also take a look at Bednar’s Statcast profile, courtesy of Baseball Savant. Notice the blue areas of the below chart.

Yes, there’s a ton of red on that profile where Bednar is among the MLB’s top percentile ranks – like in strikeout percentage, whiff rate, and expected batting average. That’s all good stuff and worth noting. Look again, though, at the blue stats where he’s ranked at poor or below-average.

Bednar is at the lower-end of MLB percentile ranks in average exit velocity, hard-hit rate, and barrel percentage. In other words, opposing batters are making hard and firm contact against his pitches when they do connect. Yes, the strikeout and whiff rates are impressive – but hitters are consistently squaring him up whenever they do get their bat on the ball. Luckily for the Pirates’ reliever, his .179 BABIP as mentioned above shows that these hard-hit balls are mostly going right to the fielders behind them and not causing damage in terms of hits or runs allowed.

The higher 91.6 mph average exit velocity and 46.3% hard-hit rate result from Bednar relying heavily on his fastball. Though the 96.8 mph four-seam fastball makes it tough on big-league hitters, he’s throwing it 63.6% of the time this season. Meanwhile, Bedner throws his curveball on 24.2% of pitches and the splitter just 12.1%. Plenty of relief pitchers have made a living off throwing hard and consistently blowing their fastball by opposing hitters. However, the low BABIP is a bit concerning when you combine it with everything else.

It’s safe to say that If Bednar continues performing anywhere close to his current level, then he’ll be an elite closer to roster the rest of this season. However, there are a couple of reasons why you should expect some decrease in fantasy value moving forward.

For starters, consider all of the advanced stats mentioned above that suggest Bednar might be pitching above his weight right now. Maybe it’s a late-career breakout at age 27 and a continuation of the flashes he showed last year. Or he’s due for a couple of poor outings to come back down to Earth.

Next, we have to consider what team Bednar is pitching for. It doesn’t take an expert to know that the Pirates are a bad team and we could see a lot more losses tacked on to their 16-23 record this season. Pittsburgh has benefited early on from playing a bunch of subpar squads like the Cubs (9x), Reds (8x), Nationals (4x), and the Tigers (2x). That has given Bednar more save opportunities with the Pirates having more chances at winning and leading late in games. In fact, seven of Bednar’s eight saves so far have come against either the Cubs, Reds, Tigers, or Nationals.

Furthermore, consider the legit possibility that Bednar is dealt at or before the trade deadline to a contending club and is no longer getting save opportunities. Pittsburgh, as it did with Richard Rodríguez last year, could look to trade away Bednar for prospects to a team willing to pay top dollar for one of the elite relievers on the market. So if you envision him on the Yankees, Dodgers, or other teams with an incumbent closer and other talented relievers, then the save opportunities will very likely decrease from what he’s getting with the Pirates. In that scenario, Bednar could still be valuable in holds leagues, but his fantasy worth in saves leagues would go down.

Overall, enjoy Bednar while you still can and be happy you drafted him onto your fantasy baseball teams. Whether you hold onto him or not, the Pirates’ closer is one of the best relief pitchers in fantasy so far this season and that makes him a great asset to your roster. As outlined above, though, consider selling high on Bednar in a trade in the near future with a few warning signs out there. While he can still be valuable in points or rotisserie leagues, you can likely get a solid player for the rest of the season in exchange.