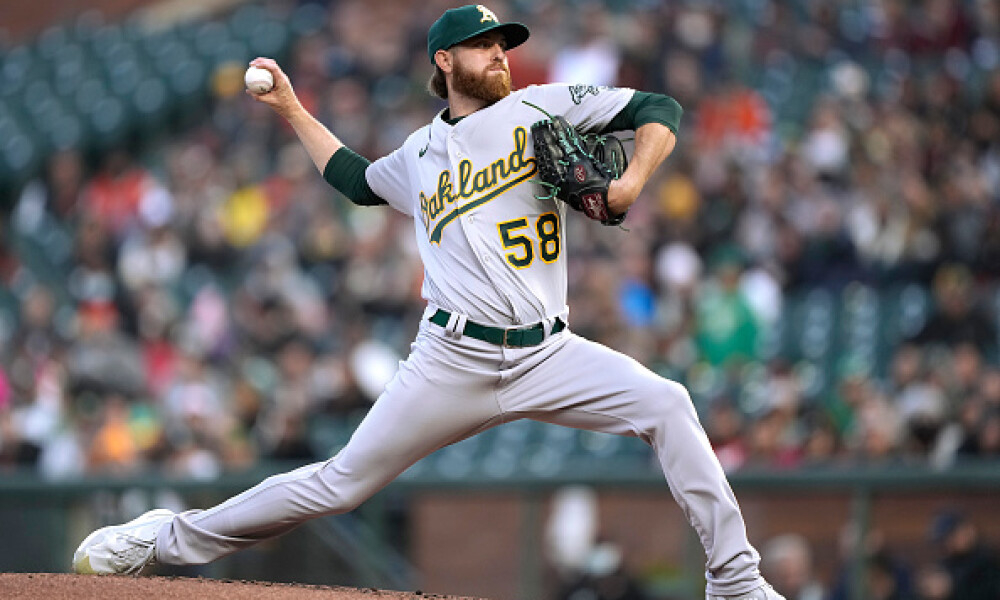 When this 2022 MLB season began, Paul Blackburn was an afterthought in fantasy baseball drafts and likely wasn’t even rostered in most leagues. The Oakland Athletics starting pitcher has since risen quickly up fantasy baseball rankings and is among the MLB league leaders in a number of stats. Through nine starts this season, Blackburn is 5-0 with a 1.70 ERA, 1.01 WHIP, and 36 strikeouts over 47.2 innings. You’re probably ecstatic if you grabbed him off the fantasy baseball waiver wire or took a chance on him late in drafts. Can the Oakland pitcher keep it going for the rest of the season? Is Blackburn’s fantasy baseball sleeper season for real? We’ll answer those questions and more in the latest MLB Fantasy Baseball Player Spotlight!

Blackburn has essentially come out of nowhere this year with his lights-out stat line and fantasy baseball dominance. As mentioned above, he is 5-0 with a 1.70 ERA, 1.01 WHIP, and 36 strikeouts over 47.2 innings and nine starts thus far. The Oakland righty has given up two runs or fewer in eight of his nine outings. To get an idea of how consistently good Blackburn has been recently, check out his game log from his last four starts.

While those aren’t overpowering numbers, he’s doing plenty to be valuable for fantasy baseball – especially since most added him off waivers at some point this season. It’s fair to wonder, though, if the 28-year-old can sustain this late-career breakout considering he struggled last season to a near-6.00 ERA.

Before we dive deeper into Blackburn, let’s take a quick look at his career to this point. He was drafted by the Chicago Cubs in the first round of the 2012 MLB Draft out of Heritage High School (CA). The Cubs eventually traded him to the Seattle Mariners in July 2016 before he was then dealt to the Athletics in November of that year.

Blackburn finally made his MLB debut in the 2017 season and pitched to a 3.22 ERA over 10 starts with Oakland. He then compiled a 7.16 ERA in six starts in 2018 while dealing with injuries. In 2019, Blackburn had a 4.34 ERA over 24 outings at Triple-A and then struggled to a 10.64 over 11 big-league innings with the A’s. He made only one brief appearance in the COVID-impacted 2020 season – allowing seven earned runs over 2.1 innings.

That brings us to last season when Blackburn had a 4.97 ERA over 17 Triple-A outings before compiling a 5.87 ERA over nine starts with the Athletics following an August call-up. None of this previous history indicated he could have as much success as he’s had in this 2022 campaign. Still, the numbers and consistent performances speak for themselves.

A big reason for Blackburn’s success this season is his diverse pitch arsenal that includes six different pitches. According to Baseball Savant, the 92 mph sinker is the most used, making up 36.1% of his total pitches so far. Then there’s a cutter (16.4%), changeup (15.9%), curveball (15.9%), four-seam fastball (10.4%), and slider (5.3%). That pitch variety is key to Blackburn’s favorable ERA and WHIP because it keeps opposing hitters guessing at the plate. Imagine having to worry about six possible pitches coming at you while you’re standing in the batter’s box.

Looking further at these different pitches, it’s clear how Blackburn is using some of them more effectively than others. The sinker, though it’s thrown the most often, has only allowed a .186 batting average and .248 wOBA against. The slight sinking motion of the pitch prevents hitters from squaring it up more so than a regular four-seam fastball. Since Blackburn mixes in his five other pitches just enough, it allows the sinker to remain effective with weak contact or hitters taking it for a strike – despite a low 13.5% whiff rate on the pitch.

Blackburn also has two other elite-level pitches that play well off the sinker. The curveball has allowed just a .074 batting average and .095 wOBA with a 32% whiff rate, while making up 15.9% of his total pitches. Check out this video of Blackburn’s curve in his April start against the Tampa Bay Rays, courtesy of Pitching Ninja.

Then there’s the rarely-used slider, which has an insane 37.% whiff rate with a .182 BA against. Though Blackburn’s slider only makes up 5.3% of his pitches, he throws it at the perfect time to generate swings-and-misses and get outs. The slider has a 30.8% put-out rate and has generated four strikeouts on just 37 total times thrown. That aforementioned slider is also interesting because he didn’t throw it all last season, according to FanGraphs. Just adding it into his arsenal has also allowed his other pitches to be more effective with similar release points but different breaks when going to the plate.

Check out this three-pitch sequence from Blackburn’s May 9 start vs. Detroit, again courtesy of Pitching Ninja. The variety of breaking balls in one at-bat is a good example of how he’s been fooling hitters this season.

As good as the slider and curveball have been for Blackburn, it’s worth noting the hit-or-miss tendencies (pun intended) with his cutter and changeup. Opposing batters are hitting .375 and .379 off the cut fastball and change, respectively, and he hasn’t had much success with them. However, he’s been able to live with those subpar results because of how good his other pitches are.

Overall, we have to expect a little bit of negative regression for Blackburn moving forward. His 2.70 FIP and 3.37 xERA suggest some worse outings are on the way. Plus, his 84% left-on-base rate and 3.1% HR/FB ratio also tell us that the current 1.70 ERA could be hard to sustain.

Despite those advanced stats, though, it’s clear that Blackburn’s diverse pitch arsenal is helping him stay comfortable on the mound while keeping opposing hitters off-balance. Maybe teams start game-planning better against him, but the six-pitch variety will give any batter fits – especially late in counts when you have no idea what’s coming.

Check out Blackburn’s MLB percentile rankings in a number of advanced stats, via Baseball Savant's Statcast. Though he’s about average or less in a number of categories, the 4.4% barrel rate is among the 80th percentile. His deep pitch arsenal is a big reason for this because you have opposing batters sometimes flailing helplessly at the last minute when a well-placed breaking ball lands in the zone (as evidenced above). 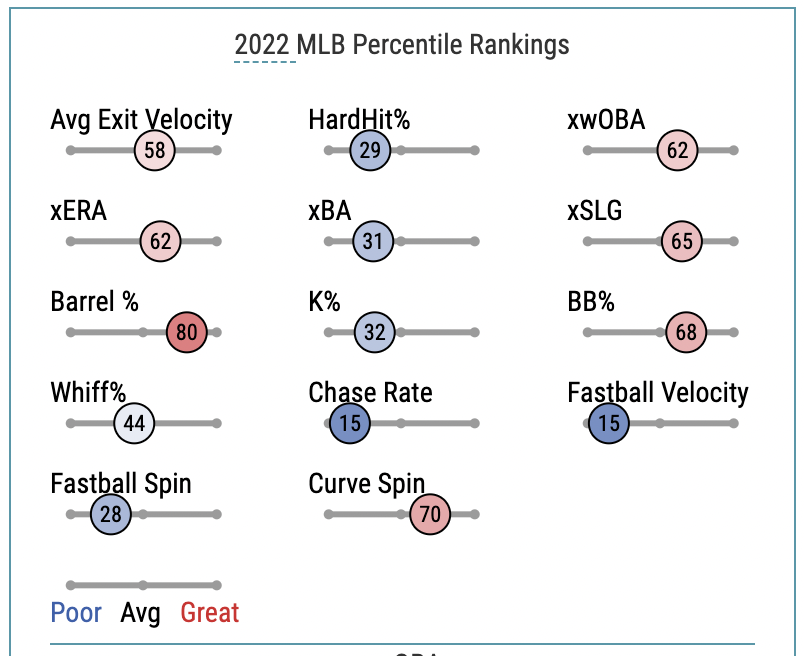 If you have Blackburn on your fantasy baseball roster, you can be content to keep him on your pitching staff for the rest of the season. Just temper your expectations and don’t expect a sub-2.00 ERA every time out. If you’re flush with pitching and need help elsewhere, feel free to float him onto the trade market to see what the return is. Chances are, some other manager will be willing to give up a struggling hitter if he needs a quality starting pitcher.

Considering Blackburn’s lack of sustained success for a full season in the majors, it’s fair to wonder whether he will be this good come August. Nonetheless, enjoy the breakout season from Blackburn for now – but monitor his performances in the coming weeks. Just be glad you found a gem on the fantasy baseball waiver wire and look for the right opportunity to sell high in trades to the highest bidder.