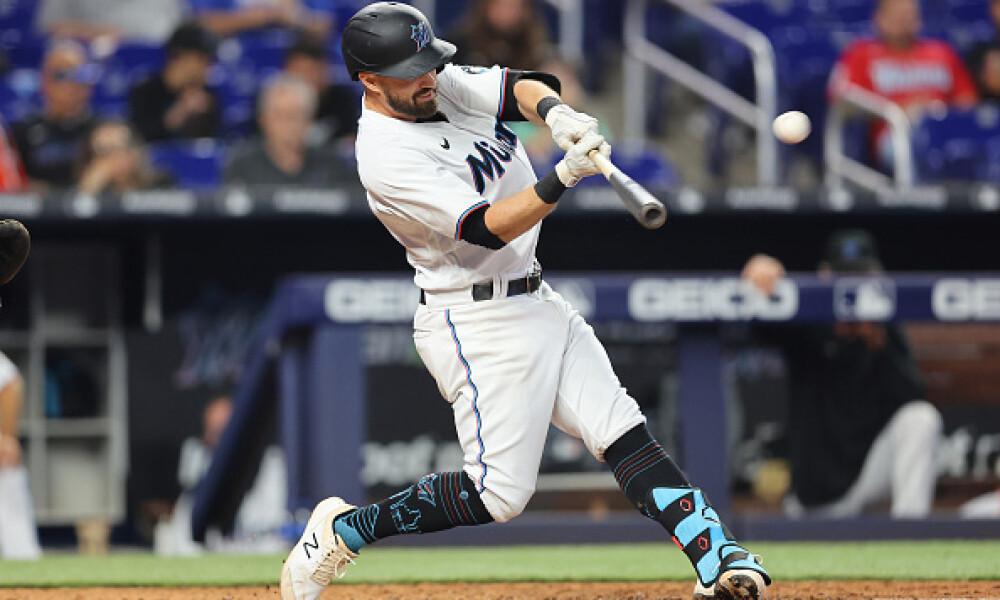 If your fantasy baseball team is hurting in the middle infield, particularly at second base, Miami’s Jon Berti is a must add waiver wire pickup for your team. After opening the year as the team’s super utility guy and buried in many preseason fantasy baseball rankings, injuries to Brian Anderson and Joey Wendle have thrusted Berti into an everyday role for the Miami Marlins. Since these players have been placed on the injured list, Berti has started all but one game, and in 10 games for the Marlins since May 28th, he’s logged one start in center field, one in left field, one at shortstop, five at third base, and one at second base. Fantasy baseball managers that add Berti to their team will enjoy solid OBP numbers and some blazing speed, and we all know how difficult stolen bases are to find at times. Furthermore, teammate Garrett Cooper, who has also been quite the fantasy baseball waiver wire find of late, had a side issue a couple of days ago, and Jesús Sánchez left last night’s game early with upper back tightness. Berti is going to be an everyday player for the Marlins for the foreseeable future, and fantasy baseball managers need to take notice before it’s too late. It’s time to run to the waiver wire and add Berti to your fantasy baseball team.

First off, Berti carries multi-positional eligibility, which is a great thing in and of itself for fantasy baseball managers. However, let’s start with taking a look at his ownership percentages across a couple of different league sites:

Those numbers are far too low for a guy that is hitting .273 with a .398 OBP and eight stolen bases this season. Do you know how many players have those marks right now? I’ll tell you. Two. Berti and some guy named Ronald Acuña Jr. Ever heard of him? If we loosen the parameters and drop the OBP criterion to .385 or higher, the list expands to four: Berti, Acuna Jr., Tim Anderson, and José Ramírez. Berti is in pretty elite company at the moment, in regards to these categories, and it’s like no one cares!

Sure, he might be in line for some regression in terms of his batting average, and he’s currently fueled by a .352 BABIP, and his xBA sits at .265, but there are some encouraging numbers thus far in 2022. His average exit velocity would be a career high (not counting his cup of tea in 2018), and so would his 8.9 percent barrel rate. He’s making more hard contact than ever before, and while he could stand to hit fewer fly balls, fantasy baseball managers can stomach it while he’s performing like this. 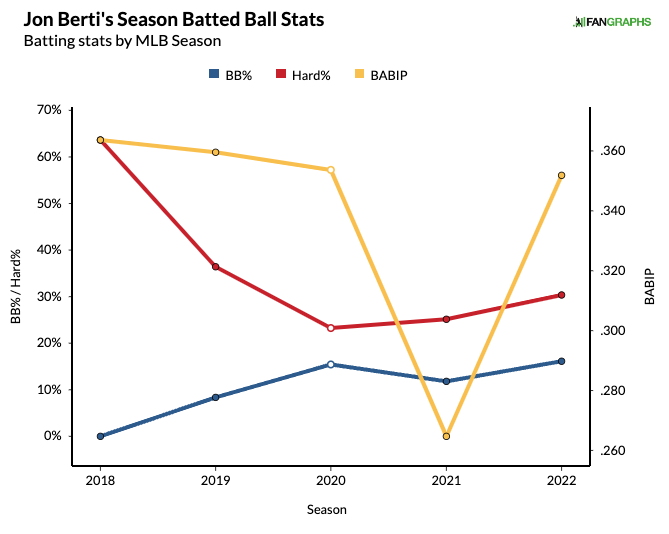 However, any potential batting average concerns aside, he’s a dynamite asset in OBP formats while he’s a regular in the lineup, as he’s always been willing to take ball four. He has an 11.5 percent walk rate for his career, and that mark is up to 13.6 percent since the start of the 2020 season. While only hitting .235 since the start of 2020, he has a .349 OBP, which will play in any OBP format, especially when you take into account his speed.

Speed and wreaking havoc are the names of Berti’s game. While he’s hit safely in six of his last seven games, he’s a perfect 4-for-4 on the base paths. This year, he’s 8-for-9 on stolen base attempts. For his career, he’s 43-for-53 (81.1%) on stolen base attempts, and when you take his numbers and extrapolate them over a 162 game season, it comes out to 31 stolen bases for the year. Per Baseball Savant, Berti’s sprint speed has been in the 95th percentile or better in each of the last four seasons. The guy can flat out fly.

Over the last seven days, Berti is hitting .320 with a .414 OBP, alongside four stolen bases, five runs scored and two RBI. He’s locked into the Miami lineup for the foreseeable future as they are a bit banged up, and while he may shuffle around the field and the lineup, but he’ll continue to get on base, and Miami will continue to let him run. If you are hurting for stolen bases or want to increase your team’s OBP, run, don’t walk, run to the waiver wire and add Jon Berti.