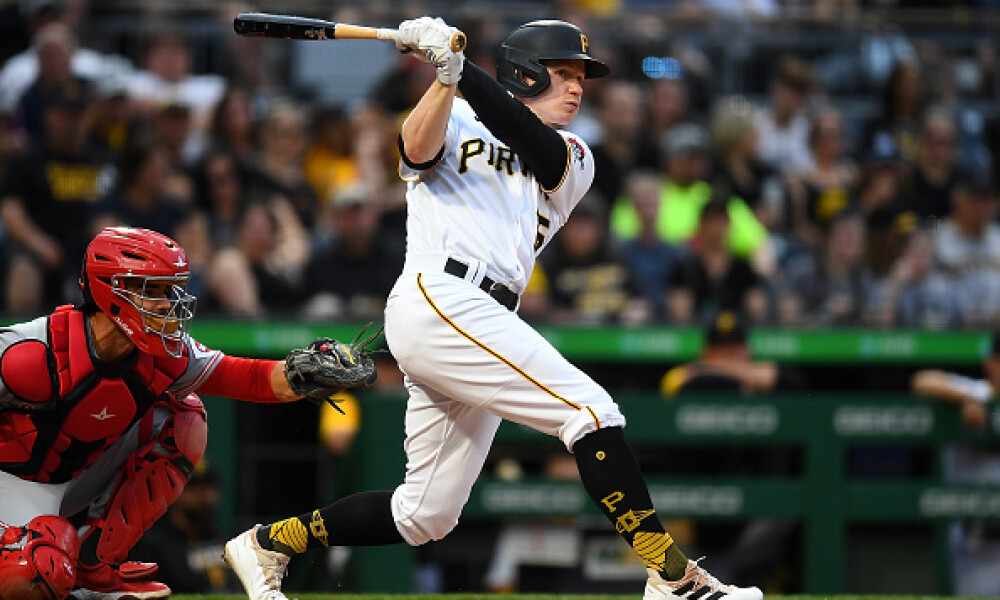 It is pretty rare that a 15th-round pick makes it to the major leagues, let alone has an impact on the fantasy baseball, but over the last two weeks, Jack Suwinski has made quite an impression while playing daily for the Pirates. He's currently sporting an eight-game hitting streak and three home runs in his previous five games. He is rostered in just six-percent of Yahoo leagues, so is he a player who is worth making a fantasy baseball waiver claim or FAAB bid for?

Let’s get started with how Suwinski came to the Pirates, and what kind of performance we saw from him in the minor leagues.

Suwinski, as previously noted, was drafted in the 15th round by the San Diego Padres out of high school in Chicago. He spent four years in the Padres system before being traded to the Pirates as part of the Adam Frazier deal last summer. In his time in the minor leagues, we saw Suwinski hit for both power and speed. He hit ten home runs or more in the Low-A, High-A, and Double-A levels with a season-high capping out at 19 home runs in 2021 between the Padres and the Pirates Double-A teams. Suwinski also had 11 steals that season which was his high in the minor leagues, but he did steal seven bases on two other occasions. The most variance in his performance came in his walk and his average batting numbers. His walk percentage numbers varied from a high of 16.9 percent in 66 games of Double-A in 2021 to a low of 8.4 percent in 111 games in 2018 in Low-A.

When it came to his batting average he had a high of .269 in the same 66-game Double-A season that produced his 16.9 percent walk rate, and a low of .208 just the year prior in 116 games of high A. So far in 2022, Suwinski has produced with 11 home runs between Double-A and MLB — with eight of those coming with the Pirates — but a low batting average and walk percentages.

Given that we have seen near career-high power numbers already from Suwinski this season, are these numbers just a flash in the pan or does it look like he could sustain his early success? Let’s start with the good news.

The Book on Suwinski Thus Far

Based on the advanced numbers, Suwinski has actually underperformed his expected batting average, slugging percentage, and weighted on-base average, by about 20 points in each category. He has also shown the ability to hit the ball hard, with a max exit velocity of 110.9 MPH which puts him in the 75th-percentile of MLB players and his barrel percentage has him in the 88th-percentile of MLB Players.

The bad news is that there are numbers in his profile that will make longer term success more difficult. We noted the range in walk and batting average numbers which will make it difficult for him to have long term success unless he continues to hit for a lot of power. However his 8.7-degree launch angle will make it difficult for him to continue to hit for power as will his average exit velocity being in just the 23rd-percentile of MLB players.

What Do We Do With Suwinski?

In the short term, Suwinski is worth an add in NL-only leagues and leagues that are 15 teams or larger if only to take advantage of his hot streak as he will come at a low price. He has been able to largely stay under most people's radars with him playing for the Pirates. He could be a classic "churn and burn" type of player should he cool down and get sent down. But with him playing for the Pirates, the team could keep him up and let him play through his struggles as they have no plans to contend for anything this season. There is a chance that he works out his batting average and OBP woes and continues to be a productive player.