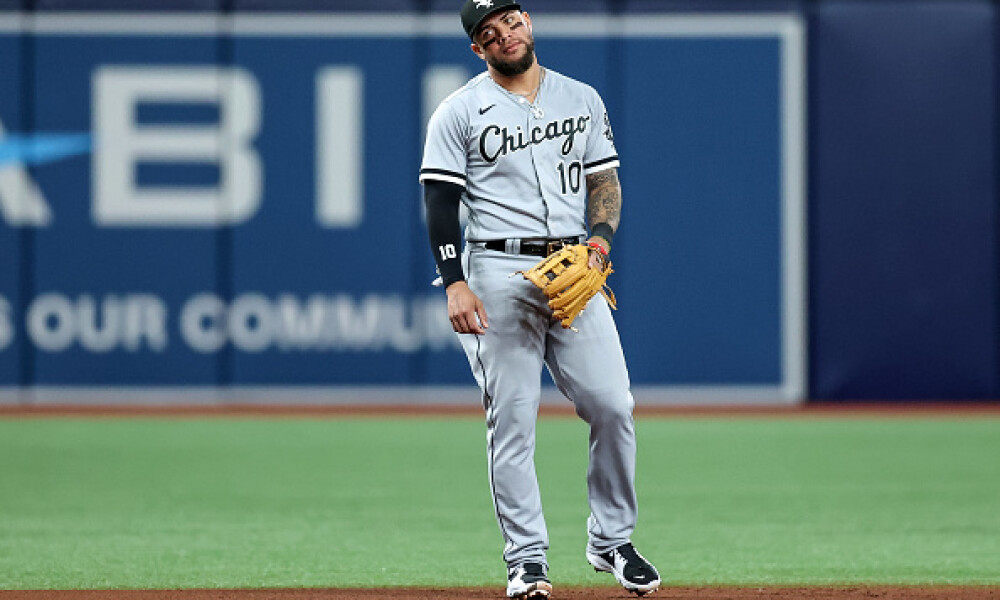 When Yoán Moncada was traded from the Boston Red Sox to the Chicago White Sox for Chris Sale in 2016 he was seen as a generational, five-tool talent. He was a player that drew comps to Robinson Canó and the White Sox seemed set at third base for years after making his MLB debut in 2017. Yet, just five seasons later he is in the middle of a third base controversy with Jake Burger as his performance continues to decline.

Moncada is now less than 50% owned in most fantasy baseball leagues. Is he worth a shot off the waiver wire or as a stash on your bench? Is he just name-value now as players like Burger surpass him? We are going to figure that out today because it's "Third Base Day" in the Fantasy Baseball Player Spotlight Series. Every Thursday I break down a different MLB third baseman for your fantasy baseball lineups. Some weeks it is a prospect and others it may be a "Sell High", "Buy Low" or even totally avoid at all costs-type player. Today we are going to dive into the offense of Yoán Moncada and decide if he still has a future as a top-hitting third baseman or if we have seen the best he has to offer and is now on an early decline.

Yoán Moncada was labeled a phenom when the Red Sox signed the 19-year-old Cuban for $31.5 million and a $63 million investment in 2015. He was billed as a five-tool player who may have been the No. 1 overall pick in the 2015 MLB draft if he had entered it. That is a lot of coin to invest in a teenager, but the pedigree was there. Moncada entered the 2016 season ranked as the 7th best prospect in baseball per MLB.com and made his major league debut with the Red Sox in September where he hit .211 for the month. The player that tantalized the baseball world with 30-30 potential seemed ready to take over as the next big baseball star but then something strange happened- he was traded. Did the Red Sox see something that they didn't like in his brief time playing professionally? Looking back at it that may be the case. The Red Sox made good on their money in December of 2016 by turning Moncada, Michael Kopech, and two other prospects into Chris Sale. Sale would go on to help the Red Sox win a title in 2018 while Moncada has been an enigma with bust potential in his career since.

Moncada was put on the fast track and was labeled as the key to a White Sox rebuild in 2018. Things did not go that easy, though, as he struck out 217 times in 2018 (more than any other hitter) with a .235 average and .315 on-base percentage in 149 games. The phenom was collecting Ks like they were going out of style, was not getting on base, did not show power, and was kicking the ball around the field like a little leaguer as he led all second basemen with 21 errors.

Here are Moncada's numbers from 2016-2021- are these five-tool phenom type numbers? (per Fangraphs)

So now, enter 2021. Moncada missed the start of the season with a strained oblique and that has not helped as he has struggled at the plate so far. He is not hitting close to what other White Sox in the lineup are hitting and now there is a little third base debate stirring in Chicago. Most experts feel that Moncada is taking up a spot in the order that someone that is hitting much better should be taking (see Max Muncy in Los Angeles). Moncada's current slash line is .184/.231/.298 with a .529 OPS and 3 HR/14 RBI. Moncada's struggles are being overshadowed by Jake Burger who slashed .270/.333/.554 in June with a .887 OPS. Burger has won games for the White Sox and is currently raking. His hitting has earned him a spot in the White Sox order, and he should be batting every day and not sent back down to Triple-A.

Injuries certainly have made it hard to get a good grasp on Moncada this season. After the strained oblique on the last day of spring training, he was on the IL until May 9. He also has had quad and hamstring issues that have limited him to 29 games. He will never be the 30/30 threat that analysts expected when he first came up in 2018. His exit velocity (87.2), Max EV (109.7), Sweet Spot % (26.9), wOBA (.238), XwOBA (.269) and hard-hit % (33.3) are all career lows. Normally a better hitter from the left side of the plate but he has been terrible from both sides this season (.190/.191 BA). Even more, telling is .243/.345/.390 slash since his contract extension. He is even seeing the highest rate of pitches in the zone this season than ever before and over 50% are fastballs yet he still struggles.

There is some glimmer of hope in that he has been hitting a bit better as of late- .346/.393/.577 with a .970 OPS over his last seven games. But a seven-game sample obviously is nothing compared to seven seasons.

Moncada owners should try and take advantage of the current little streak that Moncada is on and sell high. He is still playing off his "name" reputation as a five-tool phenom and baseball observers are still waiting for the breakout. 2019 was the best we will see out of Yoán Moncada and he is now just a serviceable third baseman that isn't even 50% owned across fantasy baseball leagues.