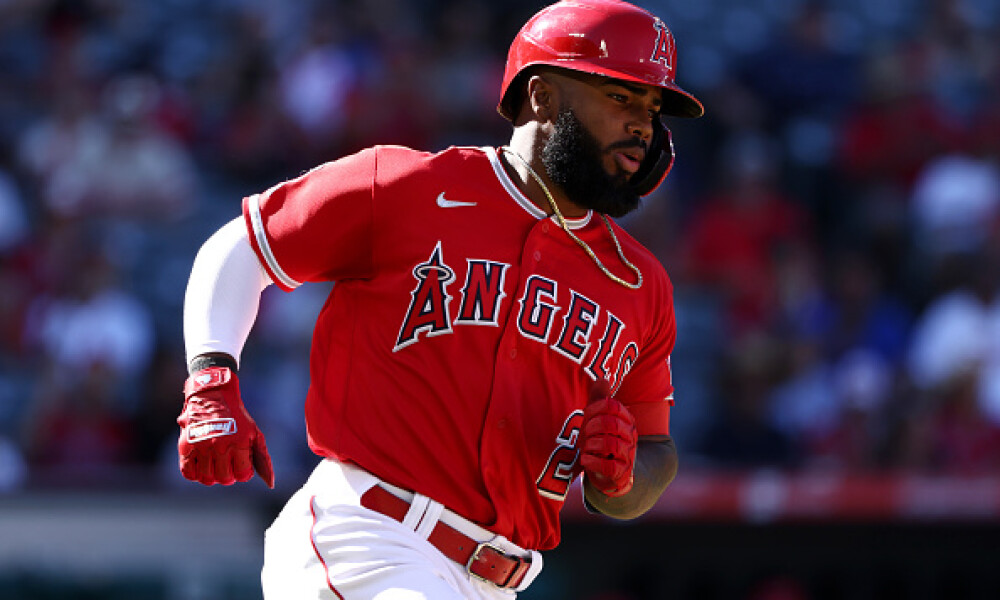 For most of the summer if I told you that Luis Rengifo was the Los Angeles Angels best hitter not named Ohtani would you have believed me? He got a chance a play and was inserted into the middle of the order and produced. Now that Mike Trout is back the Angels have a decent little “4-Pack” atop their order- Taylor Ward, Shohei Ohtani, Mike Trout, and Rengifo. The Angels have hoped to find stability on the field within their organization and Renigfo’s recent play has shown flashes of the player they hoped he’d develop into over the last few years in the minor leagues.

Following the All-Star break, his 129 wRC+, and .351 wOBA make him the third-best hitter in the L.A. lineup and a possible fantasy baseball asset during the fantasy playoffs and beyond. So, should he be picked up for the playoffs? That’s a perfect time for this question since it’s “Third Base Day” in the Fantasy Alarm Fantasy Baseball Player Spotlight Series. Every Thursday I break down a different MLB third baseman for your fantasy baseball lineups. Some weeks it is a prospect and others it may be a “Sell High”, “Buy Low” or even totally avoid at all costs-type player. Today I am going to dig into Luis Rengifo of the Angels and let you know if he should be a late-season pick-up for a playoff push in your fantasy baseball league or just left alone on the waiver wire.

The emergence of Rengifo has easily been one of the biggest stories for the Angels this season. He has become one of the club’s most consistent hitters, and it all culminated last Saturday when he became the first Angels player to hit a home run from both sides of the plate since Kendrys Morales did it on July 30, 2012. Chili Davis (six times) and Devon White (twice) are the only other Angels to even accomplish the feat.

So, when did this Luis Rengifo fairy tale begin for Angels fans? It was a doubleheader against the Mariners on June 18. He entered that day hitting just .204 through his first 32 games and was a combined 0-for-13 over his previous five games. But he went 3-for-7 in the doubleheader and seems to have been on fire ever since- especially against Seattle where he has played a mini, switch-hitting Barry Bonds with a 304/455/681 slash and 1.0114 OPS on the season.

Rengifo was not called up by the Angels until May 8th, having started the season at Triple-A Salt Lake and is slashing .299/.321/.487 with 11 homers, 21 doubles, and 37 RBIs from June 18 as he is making his claim as a solid major league player and someone that will be talked about over the winter as a fantasy asset in 2023. Since his call-up from Salt Lake City, Rengifo has the same wRC+ (113) as Matt Olson, Willy Adames, Rowdy Tellez, and Trey Mancini and a higher SLG% (.453) than Ronald Acuna, Juan Soto, George Springer, Francisco Lindor, Bobby Witt Jr, and Dansby Swanson.

Did you know that Rengifo is in the Top-50 in slugging (.453) this season of hitters over 400 plate appearances? He is among some pretty darn good bats:

Over the second half of the season, Rengifo is slashing .290/.31/.507 with an OPS of .818. What really jumps out is the .351wOBA and 129 wRC+. He has a .328wOBA on the season but the .351wOBA over the second half and his improvements at the plate are noticeable on his career wOBA chart below (per FanGraphs). The .351wOBA is also higher than the likes of José Abreu, Kyle Tucker, Trea Turner, Ronald Acuña Jr., George Springer, Cedric Mullins, and on and on.

All those players named are mainstays and nearly 100% owned in fantasy baseball leagues yet Rengifo is available in over 50% of Yahoo and 80% of ESPN leagues. Plus, he is multi-position eligible – 2B, 3B, SS, OF on Yahoo, and SS, 2B, 3B on ESPN. His career numbers won’t jump off the page, but with a career 85 wRC+ and .659 on-base plus slugging in four seasons, the hope is that he can capture this success of 2022 and carry it over into next year. 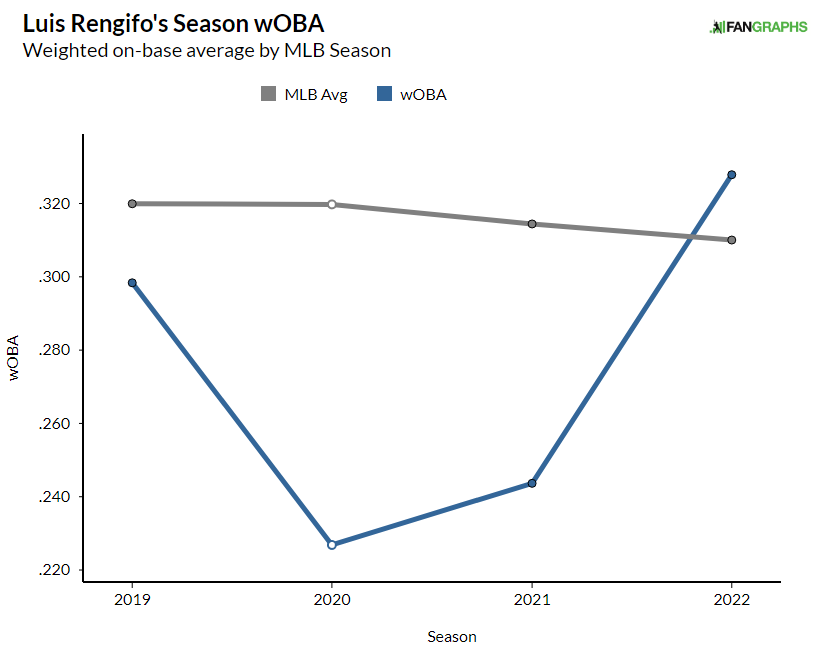