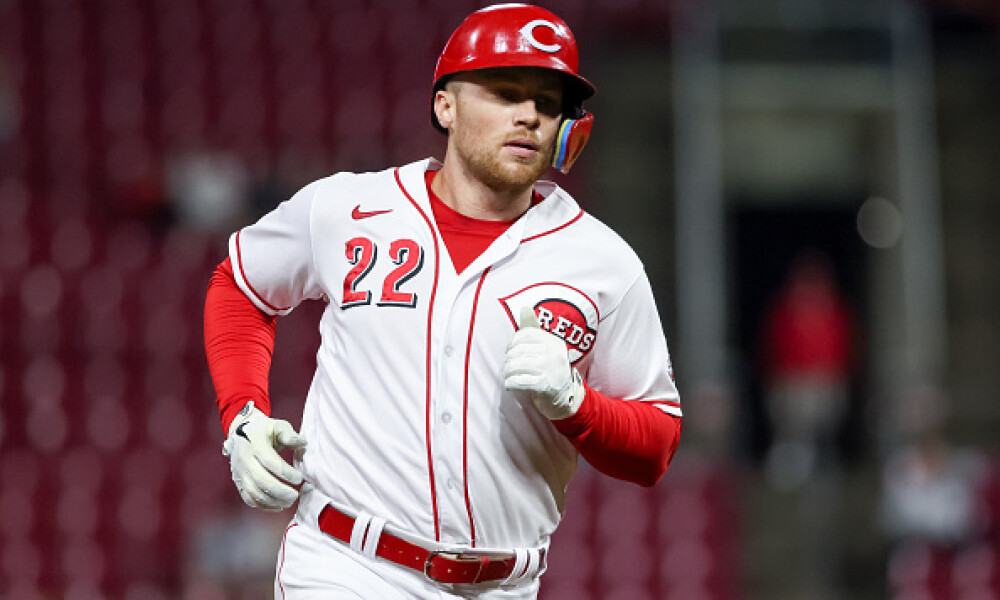 Welcome to another edition of the Fantasy Alarm Player Spotlight Series. It's Thursday, so that means it’s Third Base Day as we break down a different fantasy baseball player from the hot corner each week. There are always MLB third basemen relevant to fantasy baseball lineups and we have to decide whether they should be in your sights on the fantasy baseball waiver wire, potential trade bait, or someone to just plain cut and move on. Today we will be discussing a third baseman that leads his team in hits (46), home runs (11), runs scored (35), slugging (.514), and even ISO (.249). Want to take a guess as to which stud MLB third baseman we are talking about? José Ramírez? Manny Machado? Austin Riley? Nope. What if I told you these numbers belonged to Brandon Drury of the Cincinnati Reds? Surprised? Most are, but Drury is having a remarkable season as he rises up fantasy baseball rankings. Is it worth scouring the waiver wire to see if Drury is still available in your fantasy baseball leagues? Should you put together a trade proposal for the seventh-year veteran and fantasy baseball sleeper? Let’s take a look and see if this is just a “prolonged hot streak” or if Drury is really here to stay.

After being selected in the 13th Round of the 2010 MLB Draft by the Atlanta Braves, Drury made his impact felt right away. He was named Appalachian League Co-MVP a year later, alongside Eddie Rosario, after slashing .347/.367/.525 with eight home runs. There was no encore, though, as Drury’s stock dropped after only hitting .229 a year later in Single-A and was eventually traded to the Arizona Diamondbacks in a deal for Justin Upton in January 2013.

Known as a “baseball rat” in the Arizona organization, Drury had a label for a few years as the best Diamondbacks position player prospect yet to reach the major leagues. He was stuck in the shadow of big-time Arizona prospect and fellow third baseman Jake Lamb. After raking at High-A Visalia, hitting .300 with 19 home runs, Drury earned a promotion to Mobile where he hit .346 with four home runs in 22 games. Drury finally made it to the majors after a 2016 Spring Training where he hit .389 (28-for-72) with 10 doubles and four home runs. With Lamb winning the third base job and Jean Segura/Chris Owings ahead of him at second base, Drury was able to learn the outfield corner spots and force the Diamondbacks to keep his bat with the big club.

With the big bat and defensive versatility, Drury was well on his way to solidifying himself as a solid big-league hitter from 2016-2017:

Drury then spent the 2021 season with the Mets as a bench player and appeared in 51 games. Little did pro scouts realize, though, is that he showed signs again of that promising bat last season. Drury slashed a strong .274/.307/.476 with four home runs and five doubles in his utility role.

So, here we are. In June of 2022 and Brandon Drury is now one of the best-hitting third basemen in the MLB. He leads the Cincinnati Reds in five major hitting categories. Nick Castellanos who? Let’s just compare Castellanos, the former Reds star hitter who left for Philadelphia, and Drury with their respective 2022 advanced stats: 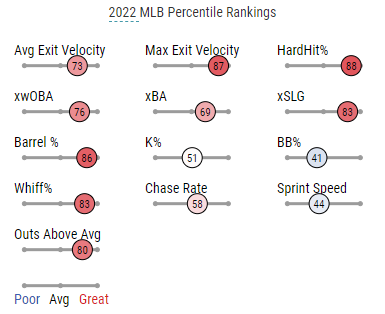 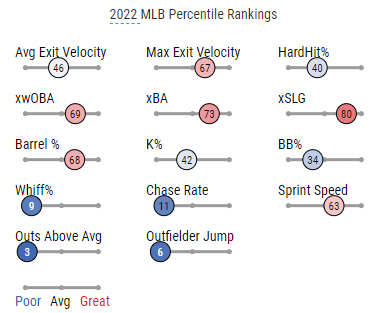 Drury has now played in 555 MLB games and has always been a contact hitter. Before this season, Drury’s 2016 rookie year was his best when he hit .286 with a .458 slugging percentage. He is on pace to shatter his season-high numbers from that 2016 campaign and we've only just passed the quarter mark of the 2022 season. Has he exceeded expectations? Of course, he has but this is a player that has always been a contact-first hitter.

Drury has a reputation as a near-elite third baseman and his defense is the main reason why he was in the Reds' starting lineup at the start of this season – certainly not because of his offense over the last four years. He is hitting the ball square, getting in good swings, and has clearly established himself as the No. 2 hitter in the Cincy lineup. His barrel percentage (12.8), exit velocity (90.3), and Max EV (112.4) are all career bests along with a .529xSLG and 48% hard contact.

Perhaps most exciting among his StatCast numbers, however, is his 14.5-degree launch angle which is immensely different from where it was during the 2016-2017 seasons (the two years where he played the most). During those seasons his launch angles were 9.5 and 7.6 degrees, showing that Drury is swinging the bat on a totally different plane in 2022. His BABIP this season is a normal .296 and his slugging percentage of .517 is actually in line with his .529 expected slugging percentage. All of this shows that when he makes contact, it is not producing fluke numbers.

With a still fairly small sample size of 193 plate appearances and the fact that pitchers may pitch to him differently in the next few months, negative regression could certainly be around the corner. On the other hand, the numbers do show that there has been a positive development in Drury's hitting approach and the results may continue to show just that. Drury may never put up elite offensive numbers over an entire season, but it’s fun to watch while it lasts. The Reds' third baseman is well worth a pick-up in all fantasy leagues where still available.