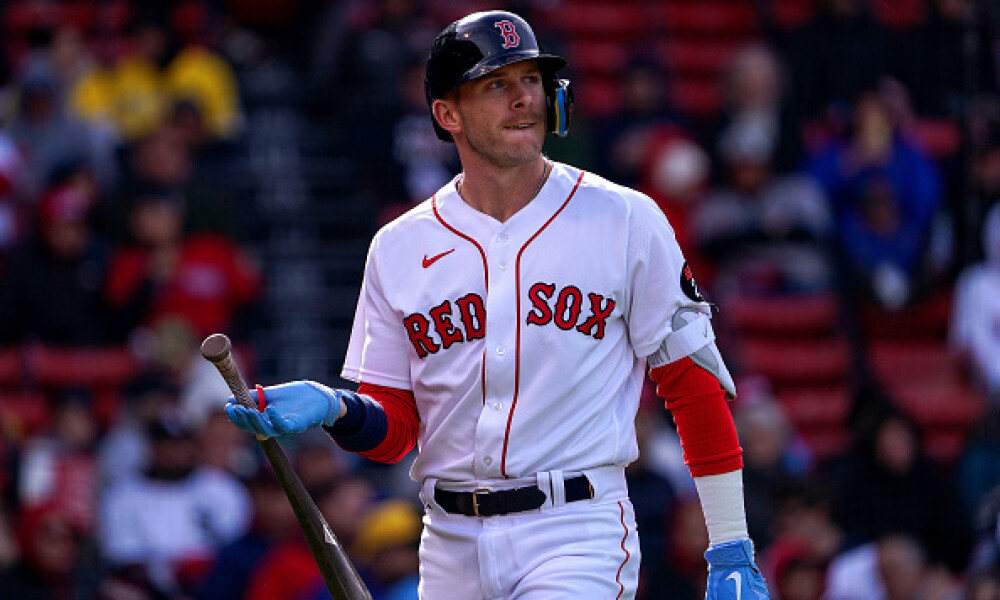 Trevor Story was one of the top MLB free-agent signings this offseason, and the Boston Red Sox signed the former Colorado Rockie to a six-year deal worth $140 million. Taking a look back at preseason fantasy baseball rankings from the day he signed his deal (3/23) to the day before the season started, Story was the third second baseman taken in drafts – coming in around the top of the third round in 15-team formats. To date, Story has been considered one of the larger fantasy baseball busts in 2022. While some of the offensive metrics are concerning, he’s a guy you should actively be looking to buy low on in trades. Fantasy baseball managers are likely to be quick to shed his .210 batting average and 30.1 percent strikeout rate but, to be honest, it can really only go up from here. That makes Story an ideal trade target instead of looking for answers on the fantasy baseball waiver wire. Story is slowly turning things around, so your window to buy low on a multi-category producer in fantasy baseball is abruptly closing. Let's take a closer look at the Boston second baseman and see what his MLB projections for the rest of the season might be.

The overall stat line for Story is underwhelming, sure. The .210 batting average, .294 on-base percentage, and .622 OPS would all be career lows for the veteran middle infielder. Strikeouts were a concern for Story coming into the majors and after posting a 30+ percent strikeout rate in both 2016 and 2017, that mark dropped to 25.1 percent from 2018 to 2021. The strikeouts have returned in a big way this year, though, largely due to an increase in his swinging strike rate combined with a stark decrease in his zone contact rate – and subsequently his contact rate overall. 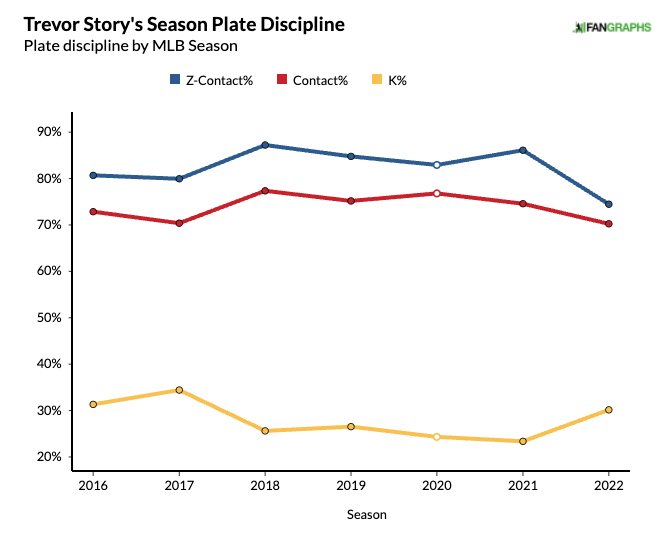 Honestly, it’s not too crazy of a surprise. For Story's career, the majority of which was spent in Colorado, his strikeout rate on the road is five percentage points higher than that at home. Another interesting development, alongside the increased propensity to whiff and decreased contact rate, is that Story has gotten a bit pull-happy again. Is he pressing? Has the positional change had an impact on his offensive game? Perhaps. 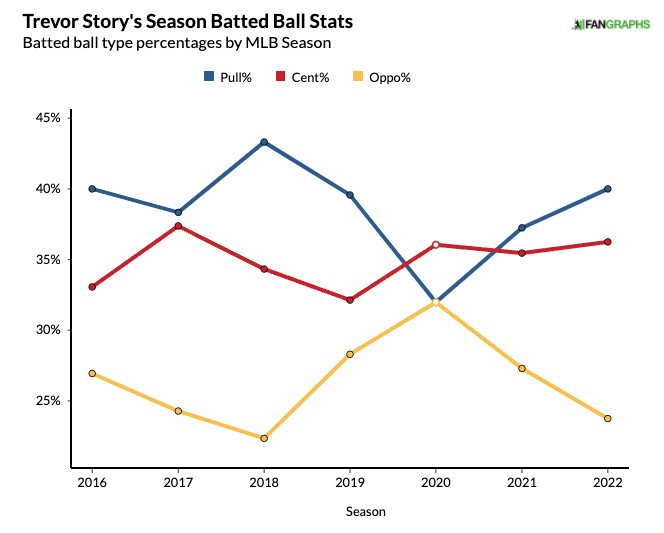 He doesn’t need to start hitting every single ball to right field, but from the mental perspective, the thought of driving the ball to all fields should help tremendously.

So, all we have done is mention some of the “bad” parts to the beginning of Story’s tenure in Boston. Now, let’s talk about why the window is closing quickly to buy low on Story. Over the last week, he is hitting .269 with two home runs, six RBI, five runs scored, and three stolen bases. He’s also notched four walks in that span, and his strikeout rate is only 19.4 percent. When you look at the below charts, the overall trendline is looking promising, namely his expected batted average and strikeout rate. 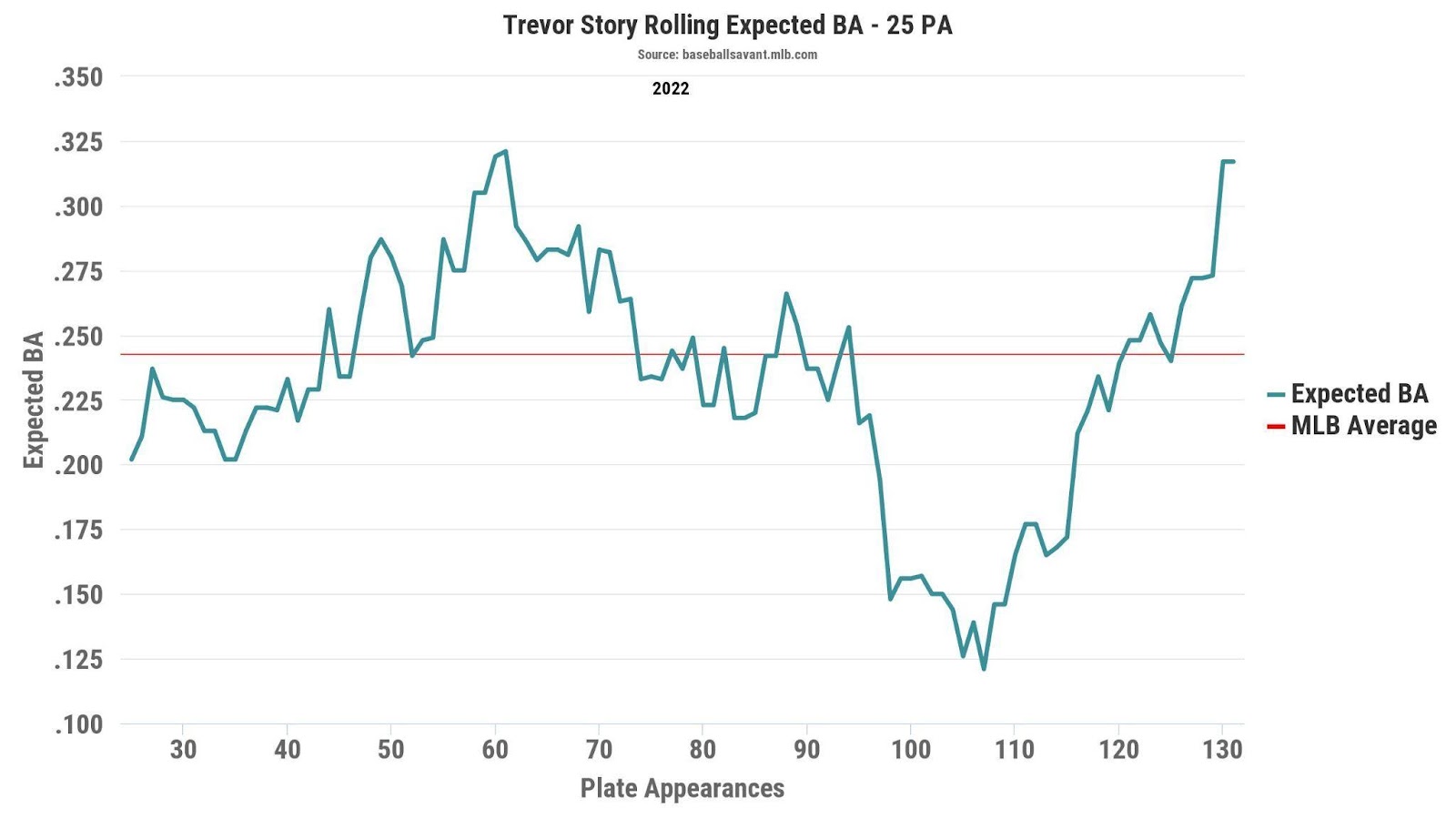 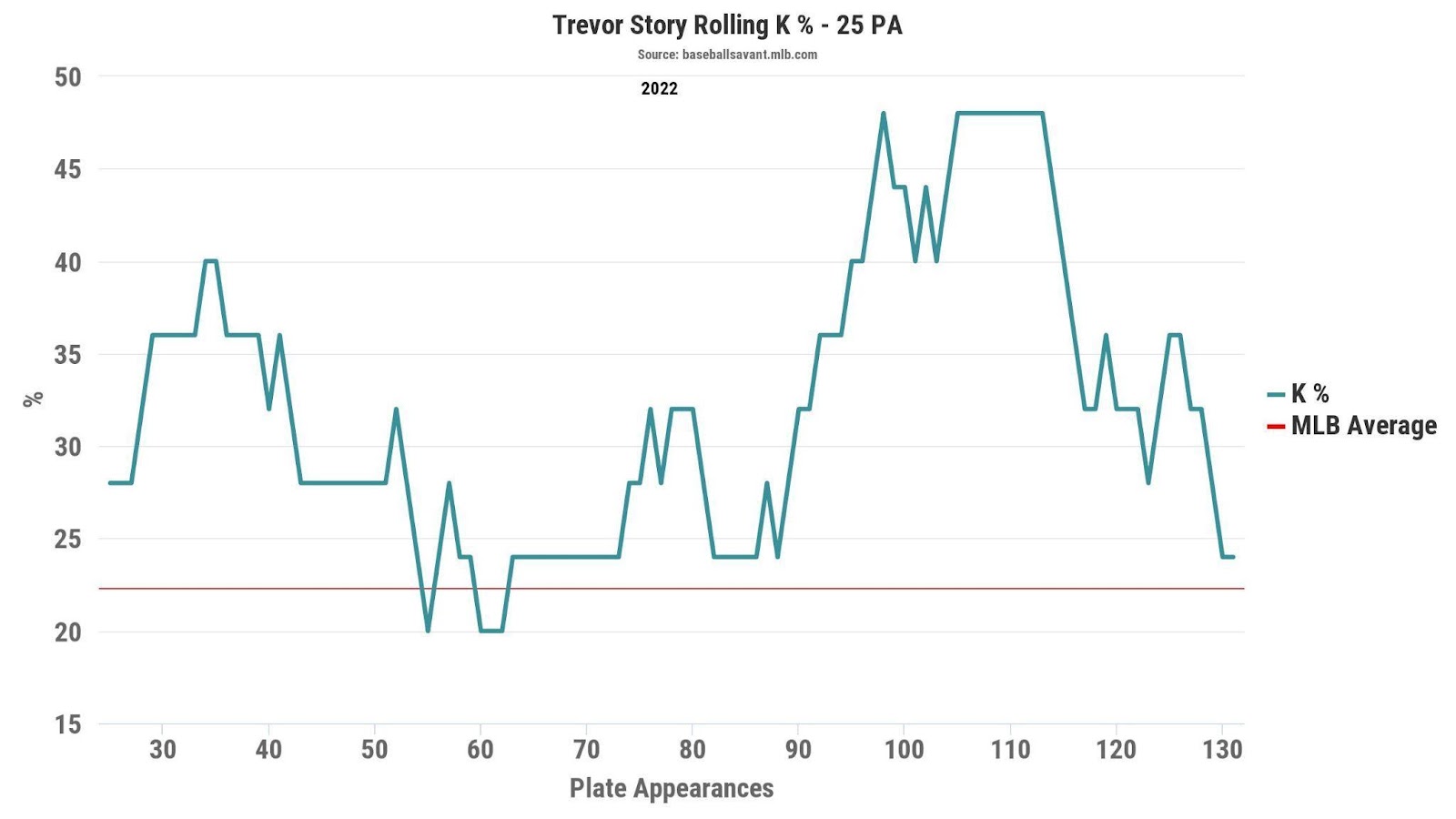 Story obviously won’t hit those marks, but he can’t be kept down for long. Additionally, for his career, he tends to start slow and get things going as the weather warms up. Take a look at some of his numbers month-by-month for his entire career:

Story's batting average may not be quite as high as you thought it might have been coming into the season, but the power is coming, and Boston is letting him run more on the base paths. He’s a proven fantasy baseball commodity with power and speed in a lineup that has largely underperformed to date. Things will pick up for Boston as a whole, and that will only help Story’s counting stats – especially as the weather gets warmer.

There are always going to be some strikeouts and whiffs in Story’s game, and some of those pitfalls were overshadowed by a hitter’s haven. However, Story is a pretty streaky hitter and a slow start to the season has been accentuated due to the fact that it’s his first extended stint away from Coors Field. Fantasy baseball managers may be chomping at the bit to sell Story, but it really should be the other way around. Fantasy baseball managers should be chomping at the bit to go buy Story, especially as the buy-low window is still cracked open.