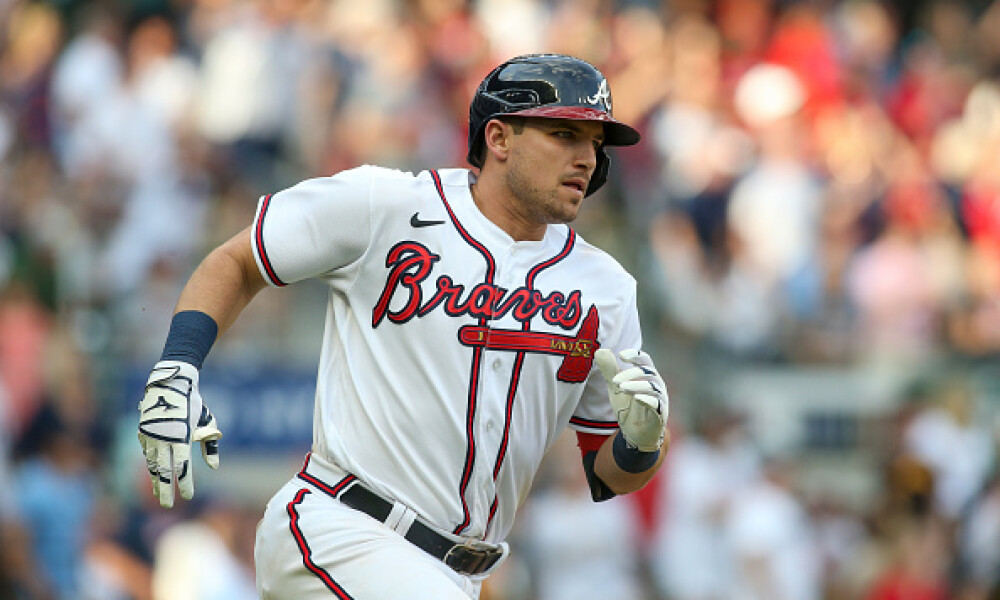 Thursday is upon us once again, so that means it's "Third Base Day" in Fantasy Alarm's MLB Fantasy Baseball Player Spotlight series! Every week, I break down a different third baseman to help improve your fantasy baseball lineups. Today, we will take a look at Austin Riley of the Atlanta Braves. As a consensus top-5 third baseman in preseason fantasy baseball rankings, is Riley ready to take the next step towards elite status? Will he repeat his high-batting average and high-power season of 2021? Or will Riley be more of the lower-batting average slugger that he's been for the early part of his major league career? We'll answer those questions and more in this deep dive into the Braves third baseman. As always, keep an eye on the latest MLB injury report, the fantasy baseball waiver wire targets, and the MLB prospect report to help your teams in other ways as well. Now let’s dig in on Riley.

Riley is a homegrown talent. He was drafted in the first round (41st overall) in the 2015 MLB draft by the Braves and got a front-row view of the rapid rise to the majors by contemporaries Ronald Acuna Jr and Ozzie Albies. By early May of 2019, Riley was forming his own legendary status on the Braves farm with 11 home runs in AAA Gwinnett’s first 15 games with 24 RBI and a .431 average. At that point, Josh Donaldson and a one-year, $23 million contract were standing in his way at third base.

On May 15th of 2019, though, Ender Inciarte was placed on the Injured List and Riley was subsequently called up to make his debut. Later that evening, the legend of Austin Riley was born as he led off the fourth inning with a 438-foot bomb off of Michael Wacha and the Cardinals. The power-hitting prodigy went on to hit .341 with a couple of doubles, five home runs, and 13 RBI in his first 11 games with the Braves, forcing them to keep him in the show permanently. It also took him only 17 days in the major leagues to win his first award – the National League Rookie of the Month after leading all NL players in home runs, RBI, and slugging percentage since his debut.

The power continued when he homered 14 times in his first 161 at-bats since his May 2019 debut. But, like many young power hitters, things don’t always go the way they like. Riley proceeded to only hit four home runs with a low .495 OPS the rest of the way while striking out in 43% of his remaining at-bats that 2019 season.

Riley did slightly improve on his batting average in the COVID-shortened 2020 season when he hit .239 with a .716 OPS. His strikeout rate also dropped from 36.4% (2019) to 23.8%. The big improvements, though, were due to more patience at the plate while not chasing outside the strike zone. For example:

Then there's his breakout 2021 season. After starting slowly out of the gate, Riley caught fire and rolled through the summer into the World Series. All you have to do is take a look at his 2021 Statcast MLB Percentile Rankings to get the full story: 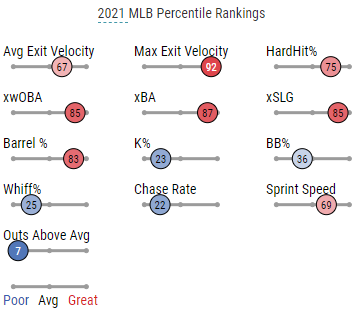 Riley had a career year for a power hitter in 2021, with 33 home runs, 107 RBI, and 91 runs scored over 662 plate appearances. Plus, he joined some pretty good company by becoming only the fourth Braves third baseman in franchise history aged 24 years or younger to hit 30 home runs in a season – along with Eddie Mathews, Bob Horner, and Chipper Jones. He also joined Mathews and Jones as the only Braves third basemen 24 years old or younger to hit .300 during a 30-homer, 100-RBI season. How about one more accomplishment? Riley and Albies became just the fifth set of teammates in MLB history aged 24 years old or younger to simultaneously put together a 30-homer, 100-RBI season.

So, here we are in the 2022 season. Was last season a mirage? Is it repeatable? Well, we know he’s still hitting bombs:

Over his last 10 games, Riley has: 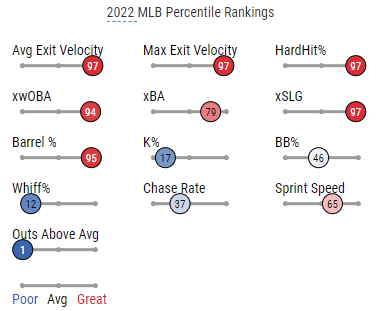 Will Riley continue to be that rare .300 hitter with elite power that he showed last season? It’s not completely fair to attach that label to the young player who never hit .300 in a full minor league season. Still, it is safe to say that Austin Riley is here to stay.