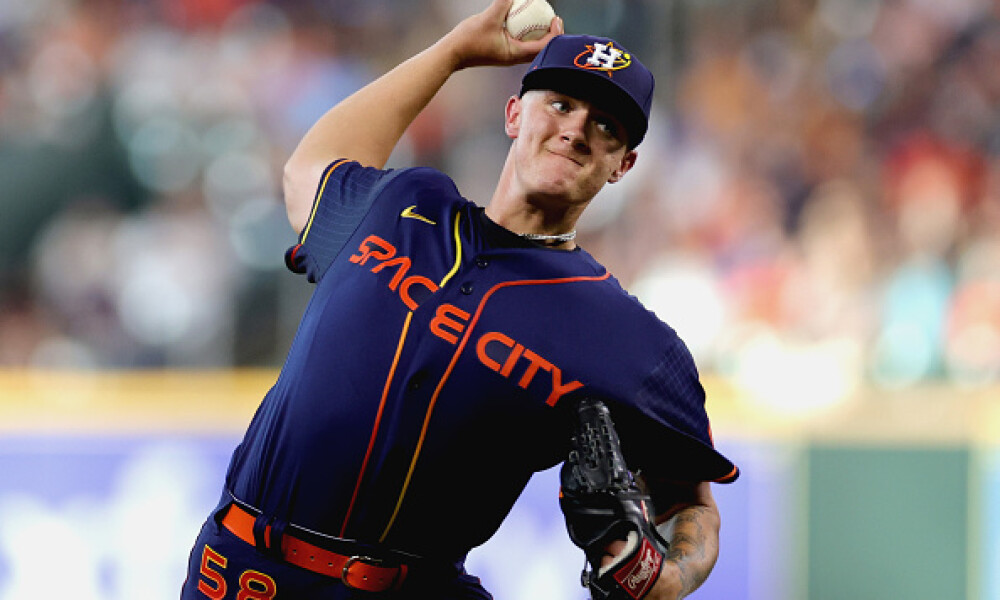 Every Major League Baseball season, the month of September brings MLB top prospects getting called up to big-league rosters and making impacts on our fantasy baseball lineups. Whether you’re still competing in the fantasy baseball playoffs or looking ahead to next season in dynasty or keeper leagues, it’s important to keep track of these rising stars. One player who’s become an interesting fantasy baseball waiver wire pickup is Houston Astros rookie pitcher Hunter Brown. The youngster impressed in his MLB debut and has now risen up fantasy baseball rankings and MLB projections for this season and beyond. Let’s take a closer look at Brown in the latest fantasy baseball player spotlight.

Brown made his MLB debut this past week and immediately showed off why he’s the No. 1 prospect in the Houston Astros organization. The 24-year-old tossed six shutout innings against the Texas Rangers while striking out five and allowing just three hits and one walk. Brown’s control was especially impressive as he threw 71% of his pitches for strikes while only needing 79 pitches over those six frames.

Brown’s pitch repertoire in his major-league debut certainly made headlines. His four-seam fastball averaged 96.1 mph and topped out at 97 on the gun. Brown also tossed a 95.7 mph slider in the first inning, which was the second-fastest slider in the bigs this season behind only Jacob deGrom. That’s some pretty good company. Just check out the pitch sequence against Marcus Semien in the first at-bat of the game.

By now, you might’ve heard about Brown’s comparison to teammate and future Hall of Famer Justin Verlander. In fact, the youngster has said that he modeled his pitching motion after Verlander while growing up in the Detroit area. When looking at the side-by-side view of their mechanics, the similarities are definitely there.

Any time a top prospect can be mentioned in the same sentence as Verlander is already a win. It’s also interesting that the two share a similar pitch repertoire of a mid-to-high 90s fastball and a sweeping slider from the right-hand side. It’s obviously way too early to expect Brown to be the next Verlander, but he’s certainly on the right track after a stellar MLB debut. Plus, it helps that Brown can learn from his Astros teammate to fine tune his game.

Speaking of Verlander, the AL Cy Young contender’s current injury is the reason why Brown is even in the big leagues right now. With Verlander on the Injured List, it’s Brown who’s taken the open spot in the Houston rotation for the time being. It looks like Verlander could return next weekend, but Brown should see a couple more starts before then. He’s scheduled for a two-start week coming up with matchups against the Tigers and Athletics. Those are some pretty favorable opponents for Brown to be a viable fantasy baseball waiver wire add.

If you’re still in the fantasy baseball playoffs, then Brown should be heavily considered as at least a streamer for this upcoming week. Those matchups against Detroit and Oakland are ideal for a young pitcher to see continued success. He should be a hot commodity on the waiver wire for those looking for injury replacements or a late-season fill-in. We’ll have to see what Brown’s role in the Houston rotation will be once Verlander returns. If he rolls out two more stud outings, though, it’ll be tough for the Astros to move him to the bullpen or send him back down to Triple-A.

If you’re in a dynasty or keeper league, Brown should definitely be on your radar going into the 2023 season. He should be in the Houston rotation at the start of the season or at least spend the majority of the year as an Astros starter. It’ll be interesting to see how Brown does in the postseason if he’s used as a starter or reliever for Houston. After one start, though, it appears that the prospect is the real deal and his fantasy stock will only go up with another good outing or two.