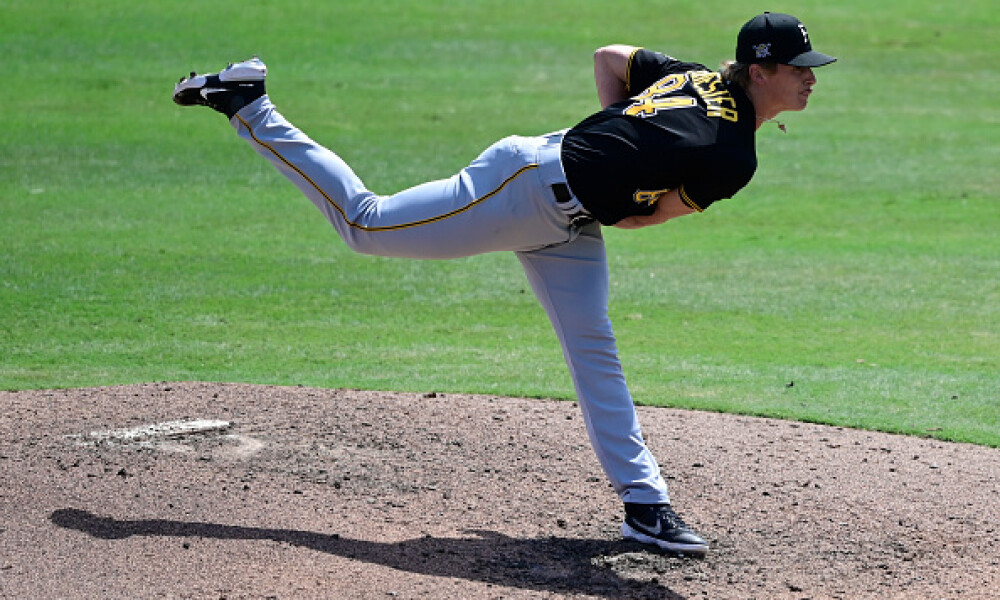 With there being so many different prospects getting called up early in the season this year and about a dozen prospects graduating from the ranks of being called a prospect, now seems like a good time to update my Top-250 prospect rankings from the preseason list that was in the Draft Guide. Below the rankings, we’ll look at the biggest risers since the preseason rankings with analysis as to why they’re rising up through the ranks.

The number in brackets is the player's overall rank in the top-250.

Priester was the top pick of the Pirates in the 2019 draft as a high-upside, prep right-hander which perfectly fits the Pirates’ modus operandi in the draft the last few years. The 6’3”, 210-pound righty used his first offseason, and the 2020 season at instructionals, to add weight to his frame but also velocity and movement to his pitches. The fastball averages a tick over 97 mph while touching 99 occasionally with a very good spin rate over 2,200 rpm. The two-seamer is a sinking pitch that he uses to induce ground balls at a good clip and the remaining three pitches are two distinct breaking pitches in a curveball and slider and then a seldom-used changeup. All five pitches are at least average with the fastballs and curveball being plus-pitches. His repeatable delivery and still improving stuff has Priester possessing as much upside as any pitching prospect in baseball.

Langeliers also came out of the 2019 draft in the first round after a solid college career at Baylor. He was known as a glove-first catcher coming into the draft but he’s worked hard to improve the bat and get it closer to his defense and that work is paying off. While getting time at the alternate site last year, the right-handed hitting catcher worked on taking balls the other way and his average exit velocity on those balls in play was 95.4 mph. He did hit .255 in a brief stint in the minors in 2019 as well. The arm is perhaps the best of any catcher in the minors as he threw out 41-percent of would-be base stealers in 2019 and the framing and blocking grade out as plus skills. If the bat continues to improve on the work he put in at the alternate site, there’s no doubt he’ll be just a tick behind the likes of Adley Rutschman and Joey Bart in the catching prospect ranks.

Smith was drafted with the thinking that he might be the replacement for Paul Goldschmidt at first base, and though his development has taken longer than expected, he’s finally starting to make an impact on the major league roster. He’s a patient hitter with a good eye and approach as he walked (148) nearly as many times as striking out (158) in his four seasons in the minors. In his brief time in the majors to this point, the bat speed and hit tool have been quite good though the power has still been lacking, like it’s always been since being drafted, which hurts his upside a bit. Arizona is using him in both the outfield and at first base to keep his bat in the lineup and while his speed isn’t off the charts, his athleticism helps him be close to an average runner. His overall profile is a hitter who will hit for a high average and a great OBP while hitting 10-15 HR a year and qualifying at 1B and OF in fantasy leagues.

Weathers has been the talk of the industry over the last week and change given his first two starts in the majors, including shutting down the Dodgers’ potent offense in one of those starts. The southpaw was a first-round pick of San Diego in the 2018 draft and since then has put on a show at each level he’s been at including opening a ton of eyes at the alternate site in 2020. The fastball is a plus pitch with plus command and sits in the high-90s with great late life. The mid-80s slider and nice fading changeup round out the arsenal and are both out pitches to either handedness of hitter. Weathers has the MLB pedigree to go along with his stuff and he should be a number-three starter at best or a high-leverage bullpen arm in a worst-case scenario.

McClanahan has managed to hang out as one of the top pitching prospects in baseball, let alone in the Rays’ system, without a whole lot of hubbub. That will change soon though as he is being called up to start on the 28th of April as the Tampa rotation continues to need depth. The lefty brings a 70-grade fastball as the lead pitch in his arsenal that tops out at 101 but sits 95-98 mph when he’s starting. He pairs that double-plus heater with an upper-80s slider that produced a 40-percent whiff rate to this point in the pros between minors and a brief debut for Tampa last year in the playoffs. The upper-80s changeup that looks like a splitter is a developing third pitch that gives him a ceiling of a number-two starter but likely number-three arm for the Rays or he could wind up like a Josh Hader type and ride that electric stuff to a high-leverage role in the bullpen.

Rodriguez has always had the stuff to be in the discussion as a mid-rotation piece for the Halos but the injury history here has kept him from showing off that stuff. He pitched all of 9.1 innings in 2018 and 2019 combined due to a back injury, but now he’s fully healthy and pitched more than 50 innings between the alternate site and Fall league last year. This spring, the mid-to-upper-90s fastball was showing up consistently in games, and the control, which had been an issue before, is now more refined as well. The fastball is a sinking two-seamer, while the slider is more of the hard and tight variety to differentiate it from his slower, more looping curveball, and don’t sleep on the plus-changeup either. If he can remain healthy, there’s no doubt that he and Andrew Heaney and Reid Detmers could form a very good top-three in the rotation.

Allan was a liability to draft due to the high signing bonus demanded and his commitment to the University of Florida, however, the Mets were able to get him to sign for less than he had asked for ($2.5 million compared to $4 million) after taking him in the third round of the 2019 draft. The prep school righty then impressed everyone at the alternate site in 2020 where he showed off his mid-to-upper-90s fastball that he works well both down in the zone and as a high strike. The mid-80s changeup is perhaps his best secondary pitch as it’s flashed plus consistently while showing good fade and deception along with his downer-curveball that sits in the low-80s. At 6’3”, 225-pounds and with three plus-pitches in tow, the 20-year-old seems poised to be on a fast track to being the Mets’ rotation as a future frontline starter to sit behind deGrom in the starting five.