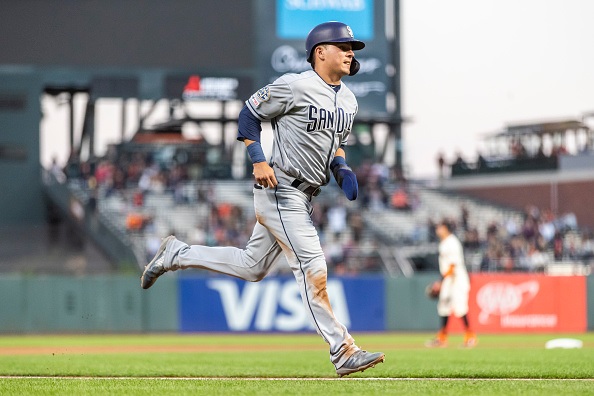 Prior to Thanksgiving, the Padres and Brewers matched up on a deal moving post-hype prospects for each other along with a starting pitcher. Milwaukee receives Luis Urías and Eric Lauer casting doubt on Orlando Arcia ’s role with the team moving forward as the non-tender date creeps up on teams. San Diego not only receive Trent Grisham and Kyle Davies, they also agreed to a four-year contract with reliever Drew Pomeranz adding to their bullpen depth.

Fantasy owners will await what position Urias ends up at, but he’s not going to replace Keston Hiura at second base:

For those who asked about possible position change for Keston Hiura, #Brewers GM David Stearns said, "We still view Keston as our second baseman.”

Milwaukee gets salary relief with team control on Lauer while shedding Davies providing more flexibility to spend this winter. San Diego seems to be on the precipice of more deals while building a bullpen akin the Yankees and Braves. Here’s the fantasy fallout of these moves.

Urias and Lauer to the Brew Crew

While fantasy owners reap the rewards of Juan Soto , sometimes it takes other players time to reach their peak. Luis Urías does not possess the same upside as Soto, but could provide some pop in the middle infield. Especially given his new hitting environment in Miller Park. Urias will not turn 23 until June and launched 19 home runs in only 73 Triple-A games in 2019. Of course, he’s yet to handle major league pitching with a career .221/.318/.331 slash over 302 plate appearances with San Diego.

For fantasy, owners will need to discern if Urias can translate his .285 isolated power and discipline from Triple-A going forward in his career. Knowing the Pacific Coast League inflates offense, a simple migration of Urias’ six percent more fly balls in the minors last year compared to the majors and trading some ground balls for line drives would be a start. Here’s a look at his spray chart from the last two years in the minors courtesy of MLBfarm.com: 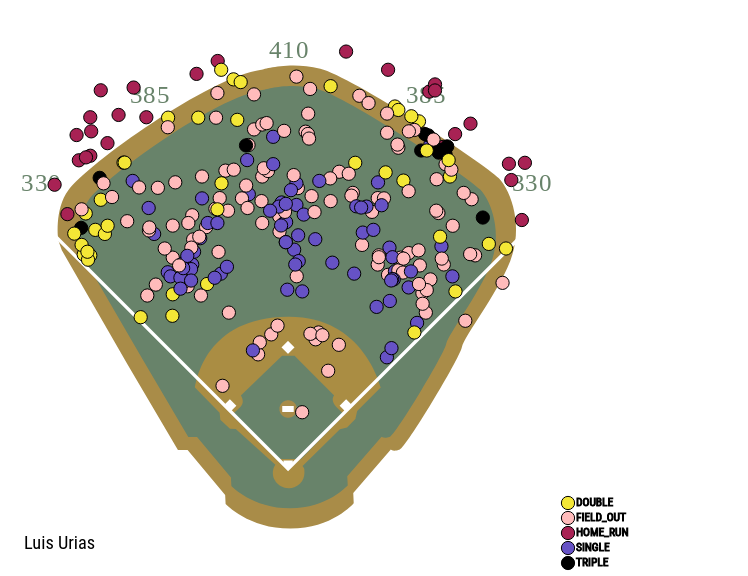 Miller Park does favor left-handed hitters, as Christian Yelich learned quickly and adjusted for. But, for Urias, his heatmap displays he could transition well to Milwaukee: 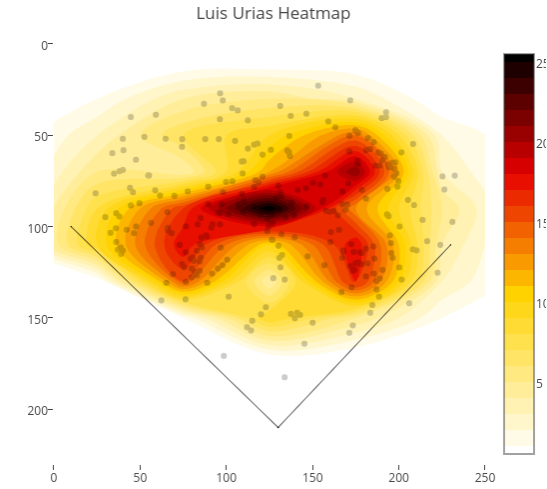 Using the middle of the field in his approach, my interest lies in the upper blob in right field. Urias could pick up a couple of home runs driving the ball to the opposite field in Milwaukee if he takes over at shortstop this year. Since Steamer cannot really account for a projection of him yet, it’s going to be beneficial to exhibit some patience with Urias. However, do not forget him as a late round flier or stash with upside. Banking on a nice second half in 2020 if things galvanize for Urias.

Eric Lauer does not necessarily move the needle in fantasy but he will absorb Davies innings for Milwaukee at a reduced cost. Lauer won eight of his 18 decisions last season with a 4.45 ERA and 1.40 WHIP. This will not play well in Milwaukee but it’s worth nothing Lauer owned a 3.08 ERA in home games last year and his road ERA minus three starts in Coors sits at 4.31. In those three Coors starts, Lauer yielded 17 earned runs in only eight innings of work. But, heed his 39.9 ground ball rate from 2019 versus 38.1 fly ball percentage. Lauer will walk a fine line and sets up as a league only option or a streamer in fantasy for 2020. Yes, his 138 strikeouts in only 149.2 innings can be intriguing, but the WHIP and 4.77 xFIP should not be overlooked.

Grisham and Davies to the Padres, plus Pomeranz

One year removed from feeling like the Padres owned a logjam at outfield, here we go again. Trent Grisham joins the roster armed with a career 37.6 on-base percentage in the minors. He appeared in 51 games with the Brewers last season scoring 24 runs with six home runs, 24 RBI, one stolen base and a .231/.328/.410 slash line. Between Double and Triple-A, Grisham hit a combined .300/.407.603 with 71 runs, 26 home runs and 12 steals in 97 games in the minors.

Fantasy owners will hope Grisham can translate his plate discipline to the majors along with his 74.6 stolen base success rate (91-for-122 in stolen base attempts in the minors) to the Padres. During Grisham’s 2019 minor league plate appearances, he accrued 67 walks versus 72 strikeouts. However, with the Brewers, his strikeout percentage jumped to 26.2 percent. Grisham did need time to adjust when moving up a level from High-A to Double-A in 2018 and he rebounded in 2019 when repeating the level, so there’s hope for Grisham moving forward.

Here’s Grisham’s spray chart from the last two years in the minors thanks to MLBfarm.com: 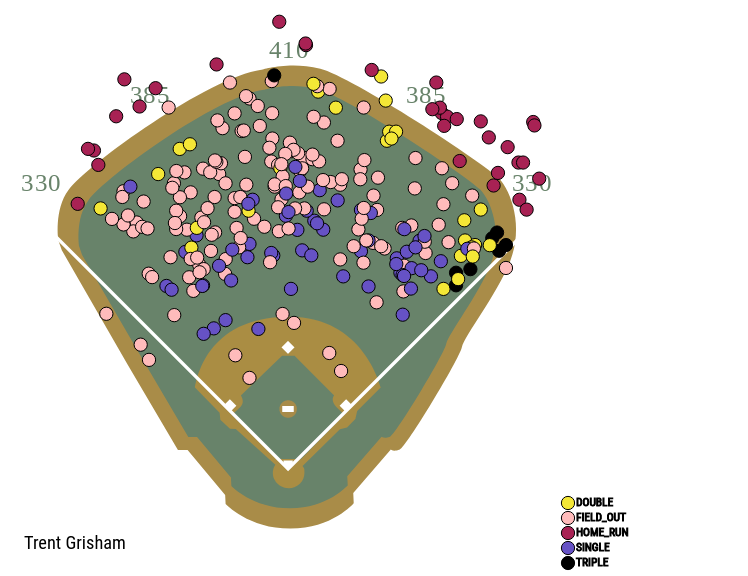 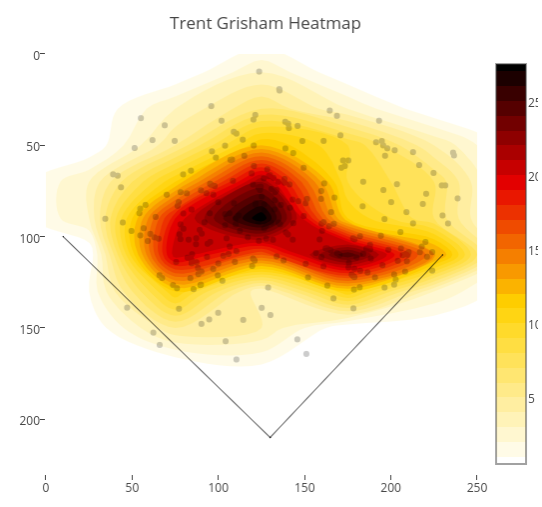 How many at-bats and where he hits in the Padres lineup will determine his potential for 2020. Presently, Grisham’s penciled in to hit second versus right-handed pitchers and Wil Myers slotted to platoon with him. There’s potential for a 15 home run and 15 stolen base season with 400 plus at-bats but a platoon caps his upside. Perhaps a poor man’s Jesse Winker with a lower average.

Kyle Davies recorded a 10-7 record last season with a 102:51 K:BB over 159.2 innings with a 3.55 ERA, 1.29 WHIP and 5.20 xFIP. Fantasy owners will raise their eyebrows regarding his xFIP which could cause some damage down the road. Avoiding Davies in any starts in Coors makes sense but as a home stream and when pitching in San Francisco, he will be serviceable.

With Urias no longer a part of the depth chart, a spring battle could emerge between Esteban Quiroz and Ty France at second base or a potential platoon:

Also, 27 year old LHB 2B Esteban Quiroz raked for the Padres at AAA last year, slashing .271/.384/.539 with 19 HR in 89 games in El Paso. And with RHB Ty France having seen significant action at 2B last season, an interesting platoon option also presents itself.

Not to be overlooked, the Padres continue to piece together a strong bullpen. Adding Drew Pomeranz to high leverage will benefit Kirby Yates and allow Andres Muñoz to pitch the seventh or eighth inning depending on match-ups:

It’s a small sample, but Pomeranz proved dominant in relief last year riding the success of his increased fastball velocity and bite on his curve to success. In an effort to avoid overkill, if interested in reading about Pomeranz, he’s covered in this end of the year piece highlighting the Relief Pitcher Metric developed on Fantasy Alarm by Matt Selz and myself.