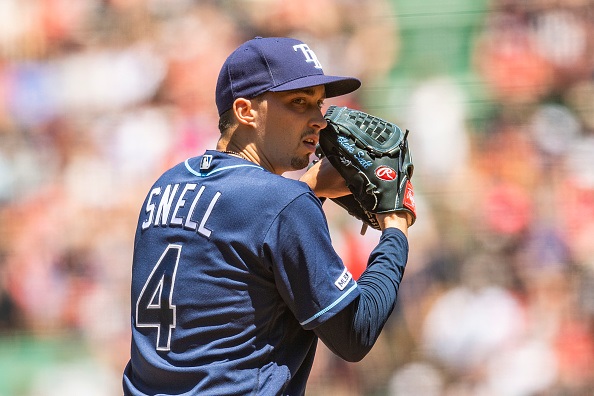 During a dormant winter with little movement on the free agency front, San Diego fired another shot across the bow of in-division rival Los Angeles adding starting pitcher Blake Snell to the rotation for the next three seasons:

BREAKING: The Padres have an agreement in place to acquire Blake Snell from the Rays, sources tell @JCTSports, @Ken_Rosenthal and me. Luis Patiño, Francisco Mejía, Blake Hunt and Cole Wilcox would head to Tampa. Deal pending review of medical records.

Snell, last seen being removed from Game 6 against the Dodgers after giving up only his second hit of the contest, represents a recent trend by the Padres:

No organizations develop SPs like the #Indians/#Rays, nor trade them to maintain a low payroll and young depth like those clubs. And those are the teams the #Padres have dealt with recently to land Clevinger and Snell.

San Diego added Mike Clevinger at the trade deadline in 2020 and once again went to its talented prospect well to acquire Snell but yielded Luis Patiño in the process. Patiño represents the first top shelf minor league player moved in these deals. With Clevinger slated to miss the 2021 season after undergoing surgery, procuring more depth in the rotation at a reasonable price makes this deal a potential win-win no matter how many view it on social media. As for the fantasy fallout from the deal, it's time to delve into the move from each team's standpoint.

Taking into account Snell won the Cy Young Award in 2018 with a robust 21-5 record with 221 strikeouts over 180.2 innings, a 1.89 ERA and a minuscule 0.97 WHIP, his strong season remains at the forefront of our memory banks. Since then, his results do match this breakout campaign with some injuries mixed in. Courtesy of Spotrac, here's Snell's injury log displaying games missed during his time with Tampa Bay:

Referenced in this article by Marc Topkin of the Tampa Bay Times, over Snell's last 21 starts since undergoing surgery in July of 2019, he's not completed six innings in any of them. It remains to be seen if Snell receives a longer leash in San Diego, but it needs to be accounted for when trying to figure out a projection for the 2021 season.

During the regular season in the truncated 2020 season, Snell made 11 starts going 4-2 over 50 innings with a 63:18 K:BB, 3.24 ERA, 3.57 SIERA and 1.20 WHIP. His strikeout percentage of 31 and walk rate of 8.9 percent align with past results even though he used his arsenal differently last year. Taking out his results further, here's Snell's numbers with some underlying statistics included from the start of 2019 through the end of 2020 along with his numbers from 2018 included until the end of last year.

Perhaps injuries affected Snell in the smaller sample but his numbers seem pretty consistent, but much more alluring with 2018 factored in. Entering his Age-28 season, it's reasonable to expect a rebound to past performance but there's the health issues which need to be accounted for. For instance, why Snell used his curve less in 2020 despite it being his most productive pitch creating swings and misses.

Fantasy owners love chasing upside which Snell may promise but there's many moving pieces to his transition to San Diego. How he improves if able to work deeper into games, how his elbow holds up and seeing if the Padres can maximize his offerings in the upcoming season. Prior to the trade being official, here's Snell's Steamer projection:

A deeper dive into Snell can be seen later on in our draft guide (teaser alert). As for now, assess Snell's most recent results along with his projection when targeting him in drafts. Also, a segue to a future Padres article may be pending:

The Padres made the Blake Snell deal last night, and they are also taking a serious run at free agent Ha-seong Kim, the infielder who had an OPS over .900 for Kiwoom last year. https://t.co/IBftMXbu3j He's 25 years old.

Stay tuned and if news breaks on Ha-Seong Kim later on, it will be covered for the Fantasy Alarm family.

Keeping with the modus operandi in Tampa Bay's organizational plan of attack, they traded a player at his peak while reloading an already stocked farm system:

If you're the Rays. They trade players at their peak value (and when they become expensive) and try to replace them with younger, less expensive players who will become their stars of tomorrow.

It means walking a tightrope, but they haven't fallen often.

Some may view this deal as a team in sell mode versus a retooling with eyes on the future. Being competitive in the American League East for a team without the revenue stream like Boston or New York requires the ability to walk the tightrope referenced in the above tweet

Luis Patiño owns tremendous upside. He logged 17.1 innings at the tender age of 20 for San Diego with mixed results walking 14 but he also recorded 21 strikeouts. Patiño used his fastball almost 70 percent of the time as a reliever but flashed a change which produced a 33.3 whiff percent and put away percent plus a slider which generated a 47.8 whiff rate. Once Patiño learns to put away major league hitters with this pitch, his ceiling rises.

Noting Patiño only logged 7.2 innings Double-A prior to his major league debut makes his future even more intriguing. Even if he starts the 2021 season in the minors, which for his development makes sense, knowing he ended up with an organization which may refine his arsenal makes him more appealing going forward.

Addressing an immediate need, Francisco Mejía takes over as the second catcher for the Rays this season backing up Mike Zunino . Mejia struggled in his limited sample last season trying to play through a left thumb injury. In 2019, Mejia slashed .265/.316/.438 with eight home runs in 244 plate appearances over 79 contests but he's been a disappointment to this point for fantasy. Landing in Tampa Bay represents Mejia's third organization in the last three years.

According to our own prospect guru, Matt Selz, a key part to this trade along with Patinño, catcher Blake Hunt. Hunt's only 22 years old and stood out during the off-site training for the Padres last year. He hit .255 with five home runs and four stolen bases in 89 games at Single-A in 2019 but may move up the Rays system quickly. Tampa Bay also added pitching prospect Cole Wilcox who will make his professional debut in their system this season.

Like the Padres, the Rays may not be done this week:

Next on the trade block for the #Rays: Gold Glove center fielder Kevin Kiermaier.

If they deal Kiermaier, only one player would be remaining from the 2017 Rays roster, José Alvarado .