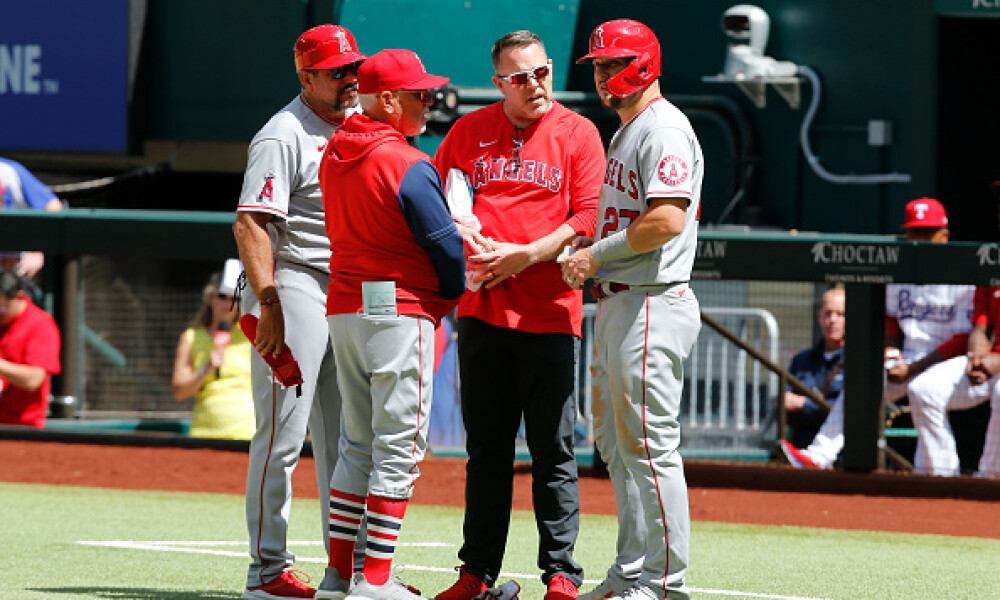 We enter a new week in fantasy baseball, and of course there are more trips to the injured list coming, and more injuries starting to mount. As always, there is some good news of players returning or injuries not as bad as we thought, so this column is not all doom and gloom. Keeping up with injuries is one of the most important aspects of winning the marathon that is a fantasy baseball championship, so let’s take a look at the infirmary heading into the new week!

He usually misses games for different kinds of injuries, but Mike Trout was hit on the hand Sunday, and while it looks like he avoided anything serious, he isn’t going to play on Monday. He had an x-ray, and they did come back negative, but I won’t be surprised if he misses more than just the one day here. Given his history, you have a very risky decision if you are in a league with weekly lineup moves of playing Trout or not this week. Everyone has to make their own decisions, but I bet it is mid-to-late week before we see him and if you have anything that resembles a decent player on your bench, I would probably play it safe and stay away from Trout this week.

He was off to an awful start, but things just got worse for Blue Jays pitcher Hyun-Jin Ryu. The MRI confirmed the left forearm inflammation, and while there hasn’t been a timetable set for his return, a pitcher with a forearm problem is usually bad news. Expect an extended absence here, likely a month or more and if you have limited roster spots you might have to cut bait, but hopefully you don’t have that many injured players on your roster after ten days and you can stash him.

The Astros closer Thomas “Ryan” Pressly has hit the shelf with right knee inflammation. I don’t get the feeling that this is going to be a long-term issue. In fact, the team made the move retroactive to April 14th, so that is telling me that Houston is trying to make this stay on the injured list as short as possible. Héctor Neris is the next guy in line with closing experience, but don’t be shocked if there’s some committee work and Ryne Stanek gets the ball in the ninth if a lot of save chances come up in the next week.

In a good news move for the Houston Astros, masher Yordan Alvarez will be rejoining the team on Monday after being on the Covid-19 injured list for the past week. Even in leagues with weekly roster moves, you should feel solid about sliding Alvarez back into your starting lineups for the coming period.

He might not be anchoring your fantasy pitching staffs, but the injury to John Means definitely isn’t good. The team put their ace on the 60-day injured list with a left elbow sprain. This means it will be nearly July before he is eligible to return. However, manager Brandon Hyde was asked by the press if this was a season-ending injury and he said he didn’t know. That’s a huge red flag. Unless you have empty injured list spots, it could be time to cut bait with Means.

The Twins pitcher left the game Saturday after just over an inning and looks like he is headed to the injured list with a hamstring problem. Manager Rocco Baldelli initially said that the injury didn’t seem severe and wasn’t even sure that he would go on the injured list although that looks like what is going to happen. He isn’t going to help you win any league championships this year, but he is at least worth stashing if he is only going to miss two starts.

Ednel Javier Báez, the Detroit Tigers prized offseason acquisition, injured his thumb on Opening Day and hasn’t been able to get healthy. He has had x-rays that came back negative, but the Tigers have elected to put him on the 10-day injured list to give him more time. The move was made retroactive to April 13th, so as of today he could already have spent half of the time he is required to take off on the bench already. This shouldn’t be a long-term absence and Baez could easily be back when eligible on the 23rd.

Mitch Haniger, OF SEA – The Seattle Mariners slugging outfielder has been off to a slow start, but now he will be off the field after a positive test for Covid-19. Manager Scott Servais has just said that he is out indefinitely but it likely won’t be more than a couple of weeks unless Haniger has complications. I am not aware of his vaccination status, but we will give you updates as they come in until his return.

The Rays 22-year-old exciting starting pitcher Shane Baz, has been moved from the 10-day to the 60-day injured list. Nothing has really changed about his status, but the team needed to free up a spot for Javy Guerra who the Rays just traded for. He still can return in early June and is definitely worth a stash if your roster allows it because he not only is a very good pitcher, but he also can rack up a lot of strikeouts.