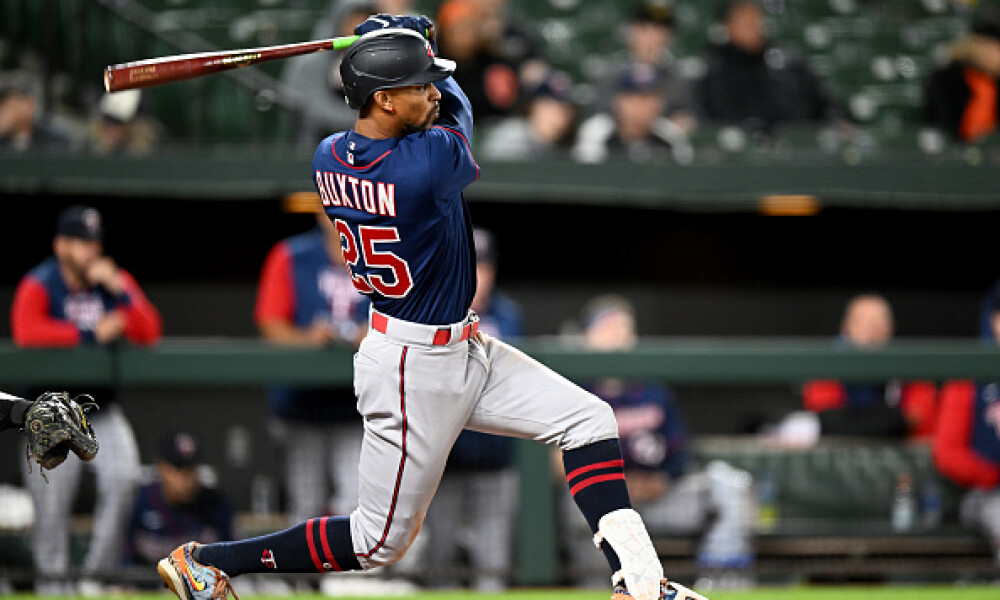 It has been quite the seesaw of emotions for both those who believe in Byron Buxton and those who don’t. For those who think he is awesome, they will point to his nine home runs and 17 RBI through 19 games. His detractors will point out that his latest hip injury is the second time that he has been hurt already this season and we are just over a month in. The Twins are calling it a low-level hip strain and, while he didn’t play on Sunday, the thought is that he will be able to return during this week's series. It appears that Buxton avoided major injury and should be able to be put back in your lineups this week.

The Cubs' third baseman left Saturday’s game with a left ankle bruise and, although he also didn’t play Sunday, his x-rays have come back negative. The thought is Patrick Wisdom will avoid the Injured List and be able to return early in the week. His .226 average hasn’t been lighting the world on fire, but he does have 15 RBI already. So park him on your bench for a day or two and hopefully, Wisdom will return by mid-week.

The Padres' left-hander is going to make his final rehab start on Tuesday and assuming all goes well, he will make his season debut next weekend. Blake Snell has missed the first month with a groin injury, but the oft-injured starter is on the verge of returning. This could make some waves on your fantasy roster, even if you don’t have Snell, as the Padres would either have to go to a six-man rotation or perhaps send MacKenzie Gore back to the minors. The young stud has been pitching well, though, so we will have to keep an eye on this situation.

The Mariners' shortstop left Saturday’s game with back tightness, and he didn’t play Sunday. As of right now, J.P. Crawford seems to be day-to-day as he reported that he felt better Saturday night than he did when he left the game. This doesn’t appear to be a long-term injury and the guy off to a surprisingly good start should be back in there for Seattle on Monday or Tuesday at the latest. I still think that Crawford has to come back down to Earth, but ride this hot streak for as long as it lasts.

While it appeared that the injury to Carlos Correa’s finger wasn’t serious, he did not play this weekend, and now reports are that he is not going to play Tuesday either. He has now missed three straight games and a trip to the Injured List is appearing more likely. Prospect Royce Lewis has a hit in all three games that he has played in Correa’s absence, and it looks like he might get more run in the coming days. While the move would be made retroactive to the last game he played, I won’t be the least bit surprised to see Correa hit the Injured List in the next day or two.

The Phillies' shortstop missed a handful of games with a hand injury, but now is hitting the 10-day Injured List with a left knee sprain. The team didn’t mess around putting Didi Gregorius on the IL, so this could be a slightly longer absence than the ten days. The Phillies have recalled Bryson Stott to take his place on the roster, and perhaps he will get regular playing time in this chance with the team.

Michael Wacha is off to a surprising 3-0 start to the season, but it will be derailed slightly by a trip to the 15-day Injured List with intercostal discomfort. The MRI revealed no problems, but the Red Sox starter felt soreness after his last bullpen session and is going to hit the shelf for a bit. These injuries are easy to aggravate, so that is a concern, but the move was made retroactive to May 5th. It appears that the team feels confident that he will be ready to return as soon as this IL stint is complete.

The Phillies' ace got off to a slow start but hadn’t allowed a run in his last two trips to the mound. Now, Zack Wheeler will make a trip to the COVID-19 Injured List and won’t make his scheduled start on Tuesday. The trips on the COVID list have been short this season, and I would expect Wheeler to make a start by the end of the week. Unless you are a very risk-averse player, I would still use Wheeler in leagues with weekly roster moves as he should take the mound at some point – unless he has significant symptoms.

As stated in Friday’s injury report, Ramón Laureano has finished his 80-game suspension and returned to the team on Sunday. He did not have a hit and struck out twice in four at-bats, but the power and speed combo threat should hit at the top of the Oakland lineup most days and have a chance to have solid production. If Laureano is somehow still available in your league, you should make the move on him now.

The White Sox third baseman is set to make his 2022 debut on Monday against the Guardians. Yoán Moncada has missed the first month of the season with a right oblique strain, but you should get him back into your lineups right away. He has the ability to hit .265 with 20 home runs and perhaps double-digit stolen bases. Considering how bad the injury news has been for the White Sox this season, it has to be welcomed news for one of their core pieces to be making his return.