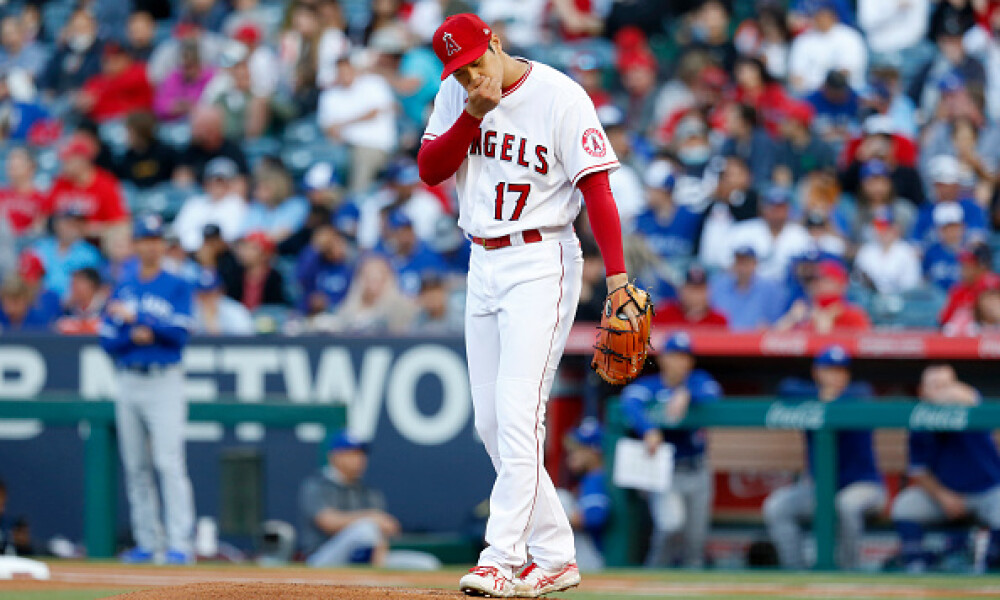 Welcome to Memorial Day Weekend! This is one of the tentpoles of the season where you start to look at your fantasy baseball lineups and really start to assess where your team is and how badly you need the fantasy baseball waiver wire. As always, guys being hurt is a big part of your roster, so you absolutely have to pay attention to the MLB injury report. We have some good news and some bad news on the injury report on Friday. If you have guys in this article, you absolutely need to check out the fantasy baseball waiver wire report by Ray Kuhn here. As you go set to decide who you are starting, let’s take a look at who is going to be off the field in the coming days.

Uh oh. The reigning AL MVP Shohei Ohtani left his start on Thursday with back tightness after six innings. He said after the game that he was confident he would make his next start, which in fairness is for a week. However, this is a complicated one. Does he miss the weekend series hitting? Do the Angels not let him pitch for a little while to rest their stud two-way player? It is a little early to speculate, but you really have to watch the news — especially for those of you playing on sites that split Ohtani into two players given that the Angels have been quick to shut him down pitching in the past. There will surely be an update over the weekend here.

The Blue Jays starter Hyun-Jin Ryu also left the game after five innings when he had tightness in his elbow. He also stated that he would make his next start, but the player always says that. He has been pretty durable in his career, so hopefully this is a short-term thing, or maybe he doesn’t miss a start at all. Ryu hasn’t been great with an ERA north of 5.00 but is still a serviceable fantasy pitcher.

The Yankees slugger Giancarlo Stanton is now on the 10-day injured list with ankle inflammation and not a calf strain as initially reported. Despite the fact that he will likely miss the next two weeks, ankle inflammation is a much easier injury to come back from than a calf strain. Stash him for now, and I don’t expect him to miss more than the minimum of time on the shelf.

After being scratched on Wednesday with a quad injury, Ronald Acuña Jr. did not return on Thursday, and he isn’t going to play on Friday either. The good news is this is a Grade 1 strain and as of now he shouldn’t need to go back on the injured list. Fantasy players who drafted Acuna are holding their breath as it has been an anxious time all year with him on your roster and hopefully, he can get back on the field this weekend.

Dodgers manager Dave Roberts said that Max Muncy could be headed to the injured list with an elbow injury. Muncy banged his elbow, and it was the same one that he injured in 2021. We thought he was going to miss a lot of time this season, and hopefully this won’t be a long-term injury, but I have to say that I am a little nervous about this one. We will update when we get more information and this one could be on the Monday injury report again.

Clayton Kershaw has started a throwing problem and was able to do so from 90 feet. His pelvis injury doesn’t have a timetable yet, but it sure is a good sign that he is at least throwing again. He is still a way away but any good news when it comes to Kershaw and injuries is worth reporting on.

We have been tracking the return of the Rays' young stud in the making and Shane Baz made another rehab start on Wednesday for the Tampa triple-A affiliate. He gave up one run over 2.1 innings and walked two while striking out only one. However, the good news is that he had no setbacks from it and that is all we are after right now. He is still going to do another two or three rehab starts, but the time is now to make the move if somehow Baz is on your waiver wire.

The Cubs' catcher Willson Contreras returned to the lineup on Thursday after missing games with a hamstring injury and it is time to get him back into your lineups. He is off to a pretty good start with five home runs to this point and is certainly a starting fantasy catcher in all formats.

The Guardians are putting their struggling outfielder Franmil Reyes on the injured list with hamstring tightness. I think this might be a case of him playing really poorly and a slight injury. It was reported that Reyes was just taking a day off on Wednesday and now he is out for ten days. I think he also needs to clear his head as he is hitting .195 with just three home runs. Hopefully he will get right with this break and get back to his slugging ways.

The Tigers young starter Matt Manning was on a rehab start but now has been shut down for the foreseeable future with biceps tendonitis. This is a terrible setback for the Tigers and the 24-year-old hurler. There is no timetable for when he might be back this season, and if you are stashing him and need the injured list spot, it might be time to let him go.

We go from terrible news for the Tigers to great news! Exciting rookie Riley Greene is set to begin his rehab assignment on Friday. Green fractured his right foot right before Spring Training ended and it looked like he could make the Tigers roster on Opening Day. With all of the injuries Detroit has suffered, Green could be in the Majors at some point in June. Greene has an awesome speed/power combo, and he could be an amazing pickup on your waiver wire to help you in a couple of weeks.

The experiment of using Jordan Hicks as a starter might be coming to an end. The Cardinals right-hander is headed to the 15-day injured list with a right forearm flexor strain. Given the fact that he hasn’t been going deep into games and he has an ERA over 5.00, it doesn’t make sense for them to put him back as a starter. Even if they do, he isn’t pitching well and isn’t coming close to pitching five innings. It is safe to let him go.

Seiya Suzuki was injured during Thursday’s game, but the hope right now is that Suzuki won’t have to go on the injured list with his left finger sprain. Suzuki slid into second base when injuring the finger and he was able to stay in the game for another couple of innings before leaving the game. Cubs manager David Ross said that he was “optimistic” that Suzuki will avoid the IL. Suzuki had at least started to hit some again after a slump, so I don’t even know that a trip on the injured list would be the worst thing. Keep up the news to see if Suzuki is able to play on Friday.

Joey Wendle missed about two weeks with a hamstring injury, but Wendle was activated off the 10-day injured list on Thursday and should be able to return on Friday. Wendle is able to help you in batting average as he is hitting .308 and steals a few bases but overall isn’t a huge fantasy player. If you are struggling at batting average, he might be worth a pickup but other than that he can stay on the waiver wire.

Taylor Ward hasn’t played since May 20th with a neck and shoulder injury, but Joe Maddon has said that he doesn’t want to put Ward on the injured list. The hope is that he could return this weekend, but nothing clear is coming from the team yet. Ward has had an amazing start to the season, and hopefully this injury doesn’t derail his production. I mean he obviously isn’t going to hit .370 all season but Ward looks like someone that can help you all year.

Marcell Ozuna was scratched right before game-time on Thursday with lower abdominal tightness. The team is saying that this is a day-to-day injury, but I never like any abdominal injury. There’s a lot of twisting not only playing the field but swinging the bat as well, so let’s cross our fingers that Ozuna might be back in the lineup sometime this weekend.

Jorge Polanco hasn’t played since May 23rd, but manager Rocco Baldelli said that he hoped that Polanco will be able to return from his ankle soreness on Friday. He isn’t off to a great start with a .232 average, but hopefully Polanco healed up with his time off and can start to hit like he did last season. Get him back in your lineups for this weekend.

Aaron Civale suffered his injury in his last start on May 20th, but the Guardians are just placing him on the injured list now. He shouldn’t need to miss more than the required amount of time, so if you have Civale it should just be another week of stashing before he is able to get back in your lineups. He has been awful to start the year, but he was pretty decent two of the last three seasons and hopefully will get on track upon his return.

That didn’t take long! Kris Bryant played exactly two games before landing back on the injured list with a back strain. The good news is that he played some catch and participated in some “baseball activities” on Thursday. I don’t think that this will be a ten-day injury, and I have a bad feeling that this could be a several week thing. Bryant has been a shell of what fantasy players and the Rockies thought they were getting with him in 2022.