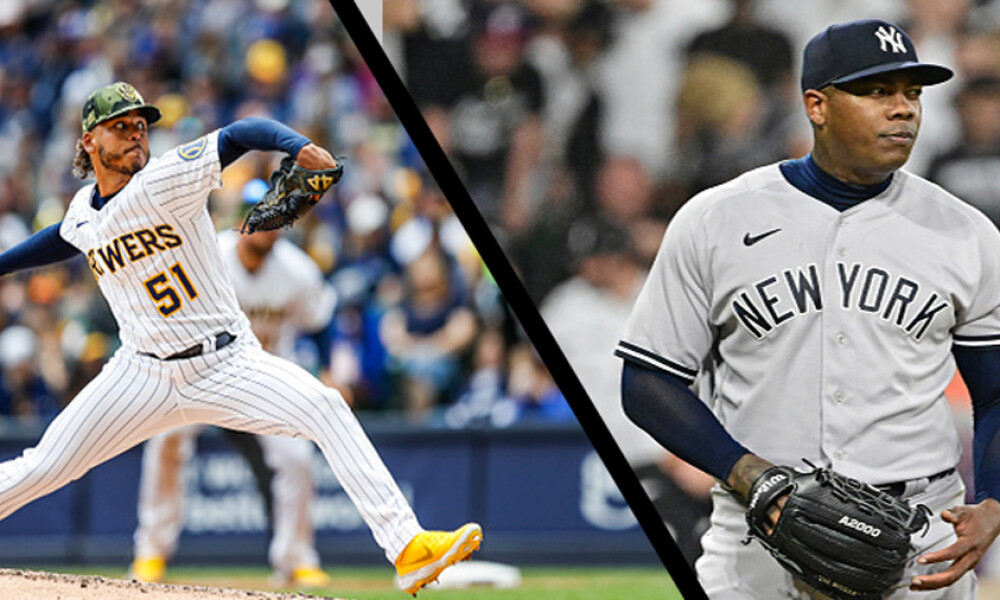 Freddy Peralta left his start on Sunday and is heading to the 15-day Injured List, as Brewers manager Craig Counsell said after the game. Peralta is dealing with tightness in his right shoulder and is going to undergo additional testing to determine exactly what is going on. However, the fact that it was announced the same day that he is headed to the IL makes me think that we might be getting some bad news here. Keep your eye on the news in the next 24-48 hours as we get test results, but Peralta will be sitting for the next two weeks at a minimum.

Aroldis Chapman was not good again in the first game of a doubleheader on Sunday. Although he stayed in the game after being visited by trainers, Chapman left a couple of batters later and is reportedly now getting treatment for an Achilles injury. There is no talk right now of a timetable or if he is being sent to the Injured List, but I will be shocked if the Yankees don’t put him there. Not only is he dealing with a sensitive injury, but Chapman also hasn’t been great so far in 2022 and a couple of weeks on the shelf might be good for him.

Frankie Montas left Saturday’s start after taking a comebacker to the hand. The extremely good news, though, is that the x-rays came back negative and Montas said that his hand was no longer numb. He is not out of the woods yet, and could still land on the Injured List, but the fact that nothing is broken is a huge relief. Even if Montas misses a week or two, he certainly avoided a major injury here and should be back on the mound for the Oakland Athletics soon.

Taylor Ward crashed into the outfield wall on Friday and although he passed concussion protocol, he is still dealing with a neck injury. He will undergo an MRI on his neck and shoulder on Monday and, honestly, I don’t like the sound of this. Ward himself said that he thought he would not only avoid the Injured List but also said he could play through it. The fact that he sat out two days and the team is now ordering an MRI, to me, means he is still feeling discomfort and the Angels want to find the cause. I’m not saying expect a major injury, but I don’t think that this is as simple as the player is making it out to be.

Brandon Belt is going to the 10-day Injured List with right knee inflammation, although it was backdated a few days since he missed the entire weekend series. The feeling now is optimistic that he will be able to return in a week when he is first eligible. Though I’m not sure how excited fantasy players are anyway, considering Belt is hitting under .230 this season.

Jazz Chisholm Jr. left Sunday’s game early and it was reported that he is dealing with tightness in his left hamstring. It is a tough injury for a guy who does a lot of damage with his legs on the basepaths, but the feeling right now is that he has not suffered a serious injury. The Marlins don’t play on Monday, so we will see if Chisholm is able to return on Tuesday. For those of you who can only make roster moves once a week, you might have to look somewhere else to replace Chisholm or roll the dice that he will be able to come back quickly.

J.D. Martinez was scratched from Sunday’s game right before the first pitch with back spasms, and we now await word on how much time he might miss – if any at all. Martinez is hitting nearly .350 on the season, even if he has a few less home runs than we expected. It would be a tough blow to fantasy teams without Martinez in their lineups as he is a consistent producer. We should find out in the next 24 hours if he is going to miss any real amount of time, but Red sox manager Alex Cora said he hopes Martinez plays Tuesday.

The sometimes Rays closer was placed on the 10-day Injured List with a back injury after not being available the past few days. Andrew Kittredge does have three wins and a WHIP of 0.78, so he has been helping fantasy teams in several ways even though he only has five saves to this point. However, if you don’t have extra IL spots, you might have to cut bait as a back injury could linger for a while.

The Cardinals' starter was pulled from his start on Sunday with left shoulder stiffness after just four pitches. The fact that Steven Matz was pulled so early in the game is obviously a huge concern as he has had some injury problems in the past. We will look for an update in the next 24 hours, but perhaps Matthew Liberatore will be coming back to the majors after being sent down after his weekend start – if Matz is forced to miss extended time.

There is finally some good news coming from the Tigers' pitching rotation. Tarik Skubal was hit on the leg with a comebacker on Friday, but he announced on Sunday that it's just a bruise and overall is feeling good to be ready for his outing this week. Skubal is off to a great start this season with three wins, an ERA under 2.25, and 50 strikeouts in 44.2 innings.