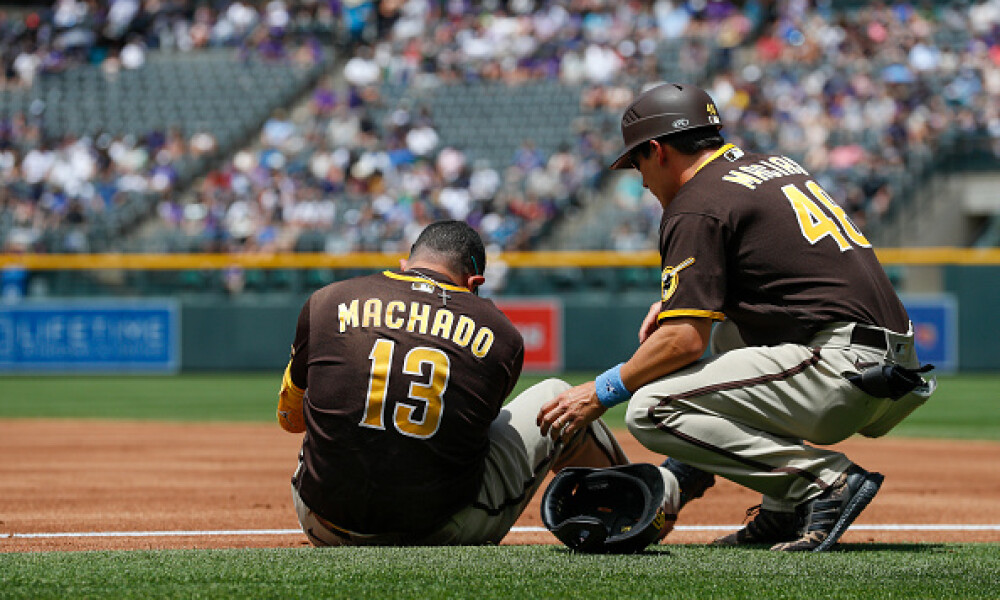 The fantasy baseball community held their collective breaths on Sunday when Manny Machado went down with an ankle injury after his first at bat of the game. Machado was having an MVP-caliber start to the 2022 season, hitting .328 with 48 runs, 12 home runs, 46 RBI, seven stolen bases and an OPS of .945.  Following the injury the team had Machado go for x-rays which came back negative and he was diagnosed with a sprained left ankle.

By all accounts, Machado is going to miss several weeks as he lands on the injured list and the team is going to be calling back up top prospect C.J. Abrams to fill his spot on the roster.

Abrams has been tearing it up at Triple-A, hitting .314 with seven home runs, 10 stolen bases and an OPS of .871. He is certainly worth a speculative add to replace Machado on your fantasy baseball roster given his potential upside.

An unfortunate incident here for Betts who collided with Cody Bellinger in the outfield on Saturday and was officially placed on the injured list on Sunday with a cracked rib. Betts was having a really strong bounce-back season, hitting .273 with 17 home runs, 53 runs, 40 RBI, six stolen bases, and an OPS of .884 prior to the injury. He was placed only on the 10-day injured list and is expected to miss about two weeks so the absence isn't expected to be overly long however his absence is still a big blow to fantasy managers.

The Guardians have sent third basemen José Ramírez to get an MRI on his right thumb after having been kept from the team's lineup for each of the past two days. Ramirez reportedly jammed his thumb during the series against the Rockies which reaggrevated the injury he first suffered a few weeks prior according to team manager Terry Francona. As of now there have not been any updates as to the results of the MRI exam. The Guardians do not play again until Tuesday.

Phillies outfielder Bryce Harper has been sidelined for the past two days due to an infected blister on his left hand. The team does not think this will be a longer-term issue but he is not able to swing right now and his status for Tuesday's game is still uncertain.

Astros slugger Yordan Alvarez was removed from Saturday's game with is now described as a hand injury. Astros manager Dusty Baker told reporters before Sunday's game that the hand injury is “better than they hoped for” but Alvarez is still expected to miss the next few days.

Astros rookie infielder Jeremy Peña continues to rehab his injured thumb that landed him on the injured list. Recent reports from Astros GM James Click state the team is hopeful that Pena can return during one of the team's next two series whether it be against the Yankees or Mets with both being in New York.

Rockies outfielder Kris Bryant is nearing a return to the Colorado lineup. Bryant has been on the injured list for a while now but is starting a rehab assignment at Triple-A and the hope is that he will be returning to the Rockies lineup for the team's weekend series against the Minnesota Twins.