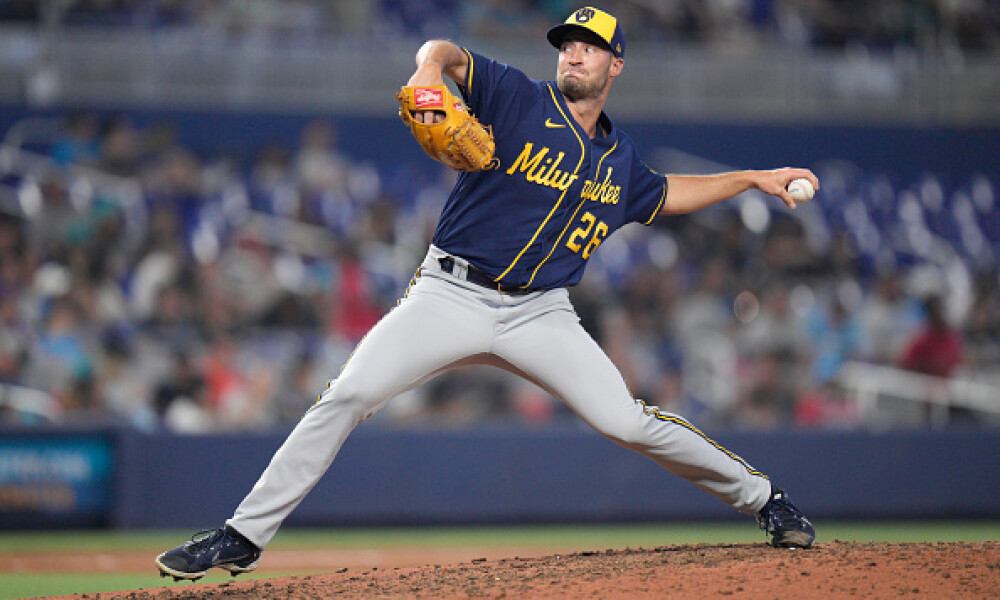 The Milwaukee outfielder has really found his footing over the last seven days, and Taylor is hitting .400 with three home runs and 10 RBI in that stretch. That is a large portion of his production over the course of the season – four home runs and 18 RBI in 109 plate appearances – so this really a case of riding the hot hand. Taylor has shown some flashes of success before, but he has yet to put things together on a consistent basis at the big-league level. With a 9.1% barrel rate and 44.2% hard-hit rate, Taylor is making quality contact to go along with a career-high 90.3 mph average exit velocity and 18.4-degree launch angle. Taylor has also brought his line drive rate up to 22.1% this year.

Peralta might not be the most exciting or flashy option, but he continues to play every day for Arizona and bat in the middle of the lineup. While he isn’t known for prolific power (aside from one 30 home run season in 2018), Peralta has hit three homers in the last seven days and is now up to eight on the season – which matches his total from last year. The .233 batting average is a little rough, but Peralta is hitting .375 in the last seven days and has a BABIP of just .244 – so we could be seeing a recovery there. There is a clear change of approach here as Peralta has a launch angle of 19.1 degrees, which is well above anything we have seen from him in the past, to go along with a career-high barrel rate of 8.2%. We have also never seen anything in the neighborhood of Peralta’s current 49% flyball rate. So while there have to be some doubts about it continuing, it is also something to be very aware of.

Why not go to another boring veteran here? We were also due for a letdown after seeing a fair number of top prospects get the call as of late. There is value in dependable veterans who play every day, and as injuries begin to mount, players like Odor ultimately show up on your radar. To some degree, we are looking to capture the hot hand here with Odor's .308 batting average, two home runs, and nine RBI in the last seven days. That only brought his average up to .222 on the year and things still don’t look great. If you need to plug a hole in your lineup, you can do worse than Odor.

Morel got the call up to a Chicago a week ago and all he has done is hit since the promotion. He has gone hitless in just one of eight games and in his last two, Morel even batted leadoff for the Cubs. Playing all over the diamond, Morel is hitting .296 with two home runs, six runs scored, and four RBI in 32 plate appearances after batting .306 in 28 games in Double-A prior to his call-up. Let’s take a shot on this continuing as Morel has an average exit velocity of 96.4 miles per hour to this point.

Santana is one of those veterans who generally floats around various rosters and the waiver wire throughout the season, but there is value in the first baseman. He continues to play just about every day for Kansas City while mostly batting in the middle of the lineup, and Santana currently has a modest five-game hitting streak. To give an indication of how bad he has been, Santana is still hitting just .167 but a .179 BABIP gives some cause for optimism. Plus, he is walking more than he strikes out, so that should count for something.

I am on the list of fantasy managers with regrets for having jettisoned Singer to the waiver wire in some leagues. In two starts after getting the call back to the big leagues, the right-hander hasn’t allowed a run while pitching seven innings each time. Singer has struck out 12 batters through 19.2 innings, has a WHIP of just 0.79, and his small walk rate also helps. Opposing hitters have a launch angle of just 3.9 degrees so far this year against Singer, and he is slated to face the Twins once again in his next start.

With Freddy Peralta sidelined, Ashby will be a more consistent member of the Milwaukee rotation moving forward. He got things started with 5.2 scoreless innings and five strikeouts against San Diego on Wednesday. Through 34 innings so far this year, including four starts, Ashby has a 2.91 ERA (3.44 FIP) and has been able to pitch around his 5.29 walks per nine innings. It does help that Ashby is striking out over 10 batters per nine innings, but keeping the ball on the ground is the biggest thing for him and the left-hander does it at a rate of 65.9%.

It caught my surprise to see that Walker was rostered in just 26% of Yahoo leagues. After throwing seven shutout innings in Coors Field over the weekend, Walker’s ERA now sits at just 2.70 with a more than respectable WHIP of 1.17. The strikeouts are a little rough here with 18 in 30 innings, but that is something we can work around based on the solid all-around performance we are seeing from Walker. Opposing hitters only have a 6.8% barrel rate against Walker and it also helps that he has a 51.1% ground ball rate.

Edwards hasn’t allowed a run in his last six outings and has struck out nine batters in 9.2 innings so far this season. The right-hander has previous experience in high-leverage situations with the Cubs, and Washington’s bullpen isn’t exactly secure – so that puts Edwards on my radar as a potential option. He picked up a hold on Wednesday in his most recent appearance, which is something to keep an eye on as well.

While the Diamondbacks are currently one game over .500, they are also seven games back in the division and I can’t expect them to truly behave like a contender. Ahead of Mantiply, they have two veterans and highly marketable arms in Mark Melancon and Ian Kennedy – neither of which are part of Arizona's long-term plans. It wouldn’t surprise me to see them traded, which could put Mantiply in line for saves. Mantiply has a 0.51 ERA and 0.85 WHIP in 17.1 innings with 15 strikeouts this season. He already has two saves this season and picked up a win and two holds in his last four appearances. There is also the risk of poor performance and injury for both Melancon and Kennedy.